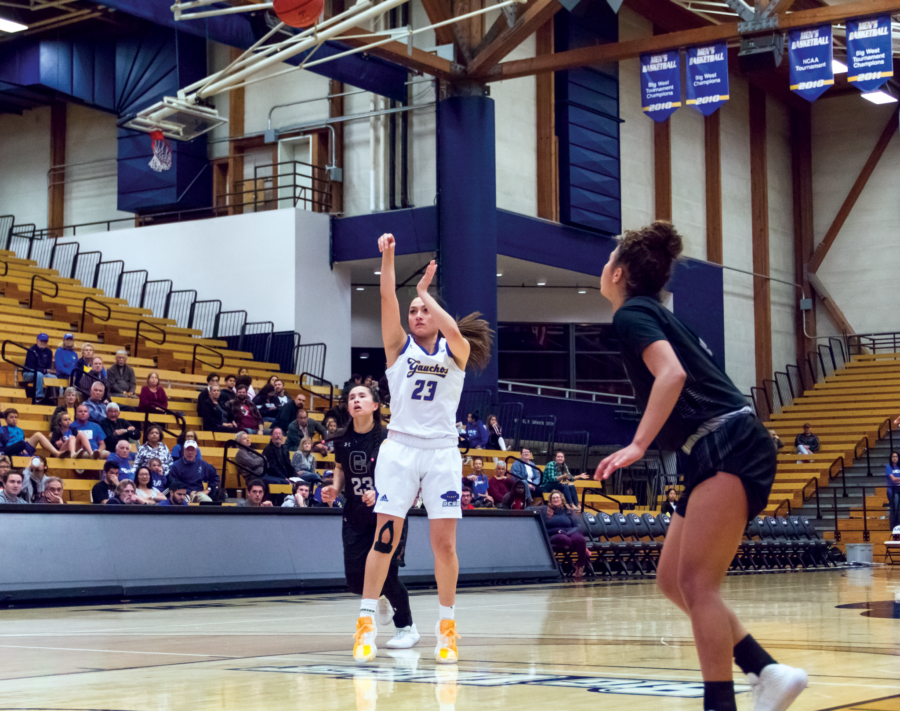 Miller grabbed the inbound pass, briefly glancing at the paint to see if freshman center Ila Lane was open before driving hard to the right.

Miller created space with her left shoulder, fading back slightly and drilling a 12-foot floater just as time expired to give UCSB a 57-56 upset over Hawai’i.

After the stunning victory in Hawai’i, the Gauchos (14-15, 9-7) leapfrogged the Rainbow Wahine (14-14, 8-7) into second place in the conference. Depending on how Cal State Fullerton and Hawai’i do in their games the rest of the week, UCSB can finish anywhere from second to fourth place in the Big West conference — a massive improvement from their eighth place finish last year.

While Hawai’i entered Wednesday’s game on a three-game losing streak, UCSB still entered the game as considerable underdogs, with the Rainbow Wahine a much stronger home team than away team.

Still, UCSB proved from opening tipoff that it was going to hang around all night, with the team never trailing by more than one point all night.

As has been the story all season, Lane put in yet another impressive outing for the ‘Chos, scoring 20 points on 10-14 shooting from the floor. To their credit, the Rainbow Wahine prevented Lane from grabbing her 19th double-double of the season, limiting her to only 5 rebounds on the night.

But UCSB won on Wednesday by producing one of its most efficient offensive performances of the season. The Gauchos shot 49% for the game, including 38% from deep; in total, the Gauchos scored 51 of their 57 points either in the paint or behind the arc.

Despite facilitating far more than scoring this season, redshirt senior Coco Miller also carried a significant portion of the offensive load, chipping in 15 points and shooting 2-3 from deep.

Nonetheless, Hawai’i kept the game competitive all night in front of its home crowd. Star senior guard Julissa Tago poured in 15 points for the Rainbow Wahine, although the Gauchos held her to 36% shooting on the night. With nine seconds to go and the Rainbow Wahine down 55-54, Tago was able to draw a shooting foul — converting both of her free throws to give Hawai’i an ephemeral lead. Redshirt junior Amy Atwell was the only other Rainbow Wahine player to notch double-figures on the night, with the Australian racking up 15 points on an efficient 7-9 shooting.

All of that was nullified by Miller’s late game heroics. Despite only scoring 9 points on the night, Miller hit one of the biggest shots of her career on Wednesday.