The Daily Nexus
UC News
“We’re monitoring the entire world at this point”: UCEAP Suspends Three Study Abroad Programs Due to Coronavirus
March 5, 2020 at 12:22 am by Sanya Kamidi

The University of California Education Abroad Program has suspended its spring study abroad programs in China, South Korea and Italy amidst concerns about the spreading coronavirus. 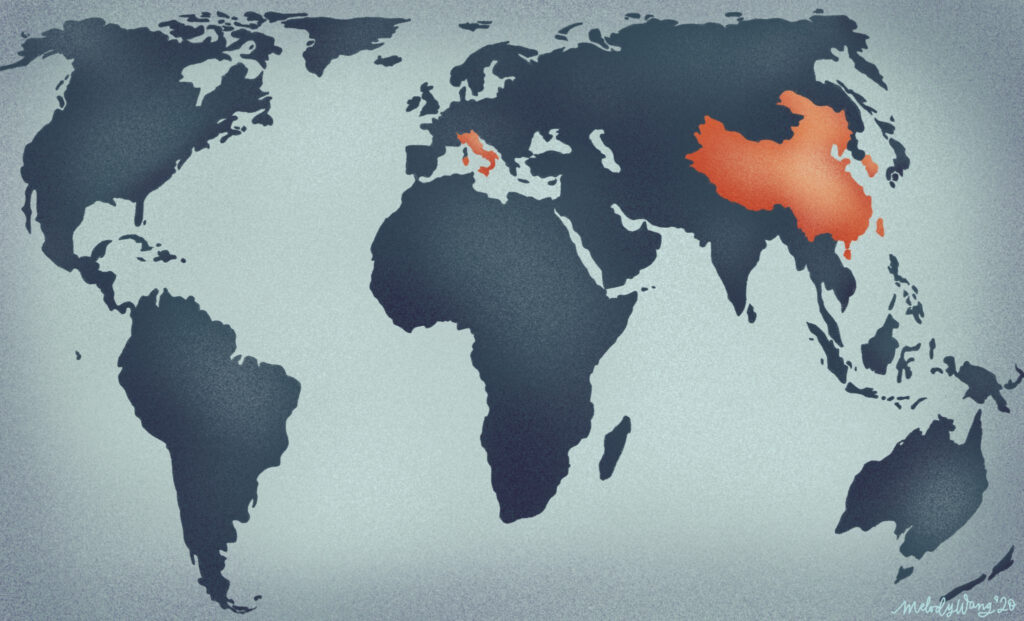 At least 95,400 people across the globe had the virus, and people in at least 80 countries have been infected. Melody Wang / Daily Nexus

While the China study abroad program was cancelled at the end of January, the South Korea and Italy programs were cancelled last week as more cases of the virus were confirmed across the globe.

Currently, these are the only three programs that have been suspended because they are the only three countries for which the Centers for Disease Control (CDC) has issued at least a Level 3 Travel Advisory, which means “Avoid Nonessential Travel.”

“Anytime that the CDC and the Department of State have a Travel Advisory Alert at a Level 3, we are required by UC policy to suspend programs,” said Myla Edmond, University of California Education Abroad Program (UCEAP) spokesperson.

In total, 350 students across the UC system have been affected by these three program suspensions, Edmond said.

Once the programs were officially suspended, Edmond said UCEAP “strongly encouraged” students to return home, although they can’t require students to do so.

Additionally, Edmond said it was dependent on a student’s home UC campus whether the student could enroll in spring quarter courses once they returned, which would also vary depending on when the programs were suspended.

Frances Woo, a third-year sociology major at UC Santa Barbara, was studying abroad in Florence, Italy during winter quarter when her program was suspended. At first, there were three confirmed cases in Italy around Feb. 24, Woo said. But in the next four days, the number of confirmed cases skyrocketed to around 400, she added.

“With all of this happening, a lot of the students, all the people I talked to about it, they were just kind of talking about it amongst ourselves because the school didn’t really say anything about it,” Woo said.

While Woo said she wasn’t as concerned about the virus itself, particularly because it is more dangerous for the elderly and people with illnesses, she said she was worried that she would have to be quarantined once she returned, which could affect her spring quarter enrollment at UCSB.

“I was just afraid that, knowing [President Donald Trump], that he was gonna implement a travel ban and do something drastic that could leave us like stranded [in Italy],” Woo said.

“Even if we came back at the same day that we’re supposed to, if we got quarantined for two weeks, that would mean that’d we’d miss the first week of classes.”

In the days leading up to the program’s suspension, Woo said she was frequently checking news sites and getting traveler alerts about the increasing risk in Italy.

While the university did send emails to students to let them know it was monitoring the situation, Woo and several other students emailed UCEAP coordinators criticizing the minimal communication from UCEAP, particularly as the situation in Italy began to develop.

“Even though [UCEAP] said they were monitoring the situation, they didn’t really give updates, they just kind of gave us a link a couple days ago and told us to check on it ourselves,” Woo said.

“The students that I was talking to knew a lot more about the situation than the school itself, or at least what the school was telling us, which was really frustrating.”

About a day before the Italy program was officially suspended, Woo said students received an email saying that they could choose to withdraw from the program early. But Woo noted that, for many students, buying a last-minute plane ticket isn’t financially feasible.

“If it’s a quote unquote optional thing, it’s not really optional for those students,” she said.

Once the program was officially suspended on Feb. 28, UCEAP told students they could submit claims to be reimbursed for their tickets for up to $2,000.

Woo and other students in the Florence program only received four units per course as opposed to five due to the program suspension.

While no programs beyond Italy, South Korea and China have been suspended so far, Edmond said UCEAP was “monitoring the entire world at this point.” As of Wednesday evening, the New York Times reported that at least 95,400 people across the globe had the virus, and that people in at least 80 countries had been infected.

Students who are preparing to go abroad are being told to continue as if their programs will be held, according to Edmond.

Jasmine Khamenian, a third-year communication major, is scheduled to study abroad in Japan for spring quarter through UCEAP, but Japan is currently at a Level Two alert.

“Everything’s prepped for me to go abroad, but I don’t actually know if I’m going abroad.”

In Japan, elementary through high schools were recently shut down, but there haven’t been any cancellations for universities so far, the New York Times reported.

“UCEAP is telling me, ‘We’ll let you know if CDC says it’s Level 3’ … in that case we don’t go, but that could be when I’m in Japan in three weeks, and it can be the second day there, and they could be like, ‘Oh yeah, actually go back,’” Khamenian said.

In addition to the possibility of her study abroad program being cancelled, Khamenian would have to deal with finding housing and registering for classes, which she doesn’t think would be a possibility so last minute.

“I don’t know if I should pack for going abroad or for going home for break only,” Khamenian added.

“There’s so many things up in the air.”