The Daily Nexus
UCSB COLA Movement
UAW 2865 To Vote To Strike Over Unfair Practice Charges Against the UC
March 5, 2020 at 12:05 am by Katherine Swartz

United Auto Workers Local 2865, the union that represents teaching assistants across the UC system, announced Monday its bargaining team unanimously voted for all union members across the state to vote on whether or not to authorize an unfair labor practice strike against the University of California, further escalating tensions between the university and the union over the cost-of-living adjustment movement sweeping the UC system. 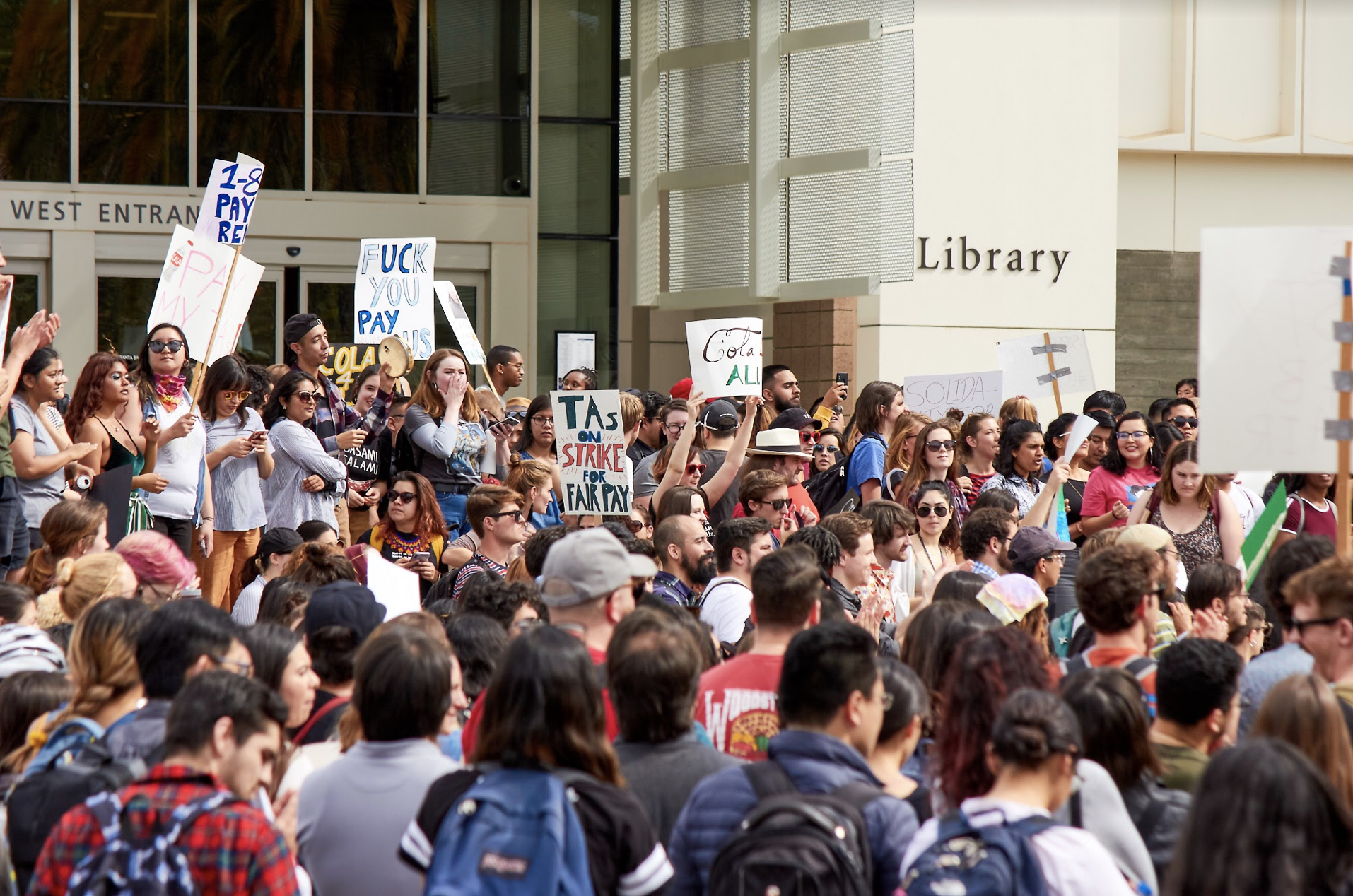 Graduate students are on a “wildcat” strike, meaning that they are striking without the approval of their union and contract. Jonathan Sloboda / Daily Nexus

In the complaints, UAW 2865 alleged that the UC attempted to bargain for a COLA with individuals and groups instead of the union. It also alleged that the UC went outside of the collective bargaining agreement with UAW by firing teaching assistants for withholding Fall Quarter 2019 grades at UC Santa Cruz.

“Every member of the union will soon have the chance to democratically vote on whether or not we can hold a strike. If approved, this action would be statewide, and could affect every department at the University of California,” UAW 2865 President Kavitha Iyengar said in a press release.

As the COLA movement grows across the UC, graduate students have emphasized that their actions are a “wildcat” strike, meaning that they are striking without the approval of their union and contract, which was negotiated by UAW in 2018 and expires in 2022.

UC President Janet Napolitano wrote on Feb. 14 to UCSC faculty that the University of California Office of the President (UCOP) would not “re-open the agreement or negotiate a separate side-letter.”

On Feb. 24, the UC Regents filed an Unfair Practice Charge against UAW. Since the UC system is a public institution, all labor disputes go through PERB when one party in a state labor contract alleges another of unfair practice.

The UC Regents allege that UAW “condoned, supported, encouraged, and failed to take affirmative action to end, unlawful concerted activity in violation of the parties’ No Strikes clause,” the charges read.

The Unfair Practice Charge will be decided by PERB in a public hearing if the charges are not settled beforehand. A hearing date has not been set, according to UAW statewide Trustee and doctoral history student Andrew Elrod.

The UC Regents are requesting that PERB issue multiple orders of action against UAW: one declaring the work stoppages at UCSC and all other UC campuses an illegal strike, and another order for UAW to refrain from engaging in any strikes, according to the charges.

The Regents are also requesting that PERB seek an injunction to prevent Academic Student Employees (ASE) — which includes teaching assistants, tutors and readers — and UAW from engaging in strikes and “any other relief the Board deems just and proper,” the charges read.

While the two orders both restrict current strikes, if enacted, the injunction would give the UC the authority to forcibly shut down strikes with police at all UC campuses, according to Elrod.

In response to the UC Regents’ unfair practice charge, UAW filed two separate Unfair Practice Charges on Feb. 28 and March 2 against the Regents.

The first set of charges allege that the UC refused to negotiate a COLA with UAW, while at the same time bargaining directly with individuals and university-funded student organizations, which don’t have the legal authority to bargain with the UC, according to a UAW press release.

“It’s clear that UC wants to create an appearance that it is respecting graduate student employees while avoiding true bargaining, where the law requires the parties to stand with equal footing and to act in good faith,” the press release read.

While there is no current bargaining between graduate students and UCOP, Napolitano published a statement on Feb. 21 saying that she would meet with the UC Graduate and Professional Council (UCGPC) to discuss a variety of issues including “cost of living.”

UCGPC then published a statement clarifying that the meeting was not in response to COLA, and that the timing and wording of Napolitano’s statement caused a misunderstanding.

The second set of Unfair Practice Charges, filed on March 2, allege that the UC violated the Higher Education Employer-Employee Relations Act by dismissing UCSC TAs from spring quarter appointments for withholding Fall Quarter 2019 grades; according to the charges, the UC “denies these workers their statutory right to union representation and is intended to bypass the union.”

These charges led to the UAW Bargaining Team’s vote on March 3, paving the way for a full UAW vote of whether or not to hold a labor practice strike.

“We have been calling for the University to come to the table and negotiate a Cost of Living Adjustment for months now. And it is not true that UC can’t reopen the contract that was ratified in 2018. It’s that they won’t. We ask them every day to open the contract and negotiate a #COLA4ALL. They continue to refuse,” Iyengar said in a press release.

What BS the wild cat strike is wrong and an un ethical tacit which they use to create a situation that they can create a real strike. what a self create situation.

go fuck off and whine somewhere else you scab wannabe

A truly representative argument from the auto workers union.

Students align with the United Automobile Workers. What a natural.