The Daily Nexus
Science & Tech
A Hail Mary for the Monarch Butterfly: The Plan To Rehabilitate Ellwood Butterfly Grove
March 5, 2020 at 3:00 pm by Sean Crommelin

Since the 1990s, the population of the Western monarch butterfly has collapsed.

This is not an exaggeration by any means.

The Western monarch butterfly once numbered in the millions as swarms of them traversed the American West in their multigenerational migration from Mexico to Canada and back again.

From 1997 to 2009, the peak number of monarch butterflies observed in overwintering sites across California was a little under four million. In 2019, that number was just over 29,000.

George Thomson, the newly appointed Parks and Open Space manager for the Goleta Public Works Department, spoke on Saturday at a public forum regarding progress made in bringing back the long-declining monarch butterfly to Coronado Preserve and Ellwood.

Thomson was accompanied by JoAnne Plummer, the Parks and Recreation manager for the city of Goleta, as well as Dan Meade, a principal scientist with Althouse and Meade, Inc. Biological and Environmental Services, based in Paso Robles.

Ellwood was once an ideal overwintering site for the species. However, coupled with pressure and stress from infectious diseases and an explosion in the use of neonicotinoids, there has been a volley of drought and flood, resulting in the degradation of the preserve.

This has been the case throughout California. According to Meade, of the 400 overwintering sites identified in the state, only 113 had any monarchs, and only 30 of those had an aggregation of more than 100 monarchs. 21 sites have been listed as “damaged or destroyed” since 2016.

In Ellwood Main and Ellwood Mesa, a combined count of 300 butterflies was recorded for 2019. In its heyday, Ellwood hosted 400,000 butterflies, “or 10% of the entire California overwintering population,” according to Althouse and Meade, Inc.

The use of neonicotinoids, pesticides which are neurotoxic to insects, has increased by several orders of magnitude in the U.S., coinciding with a remarkable decline in insect and bird populations nationwide.

Meanwhile, Ophryocystis elektroscirrha, a protozoan parasite which is found in cysts on milkweed plants, has spread in epidemic proportions among monarchs, fueled by the widespread planting of non-native tropical milkweed. 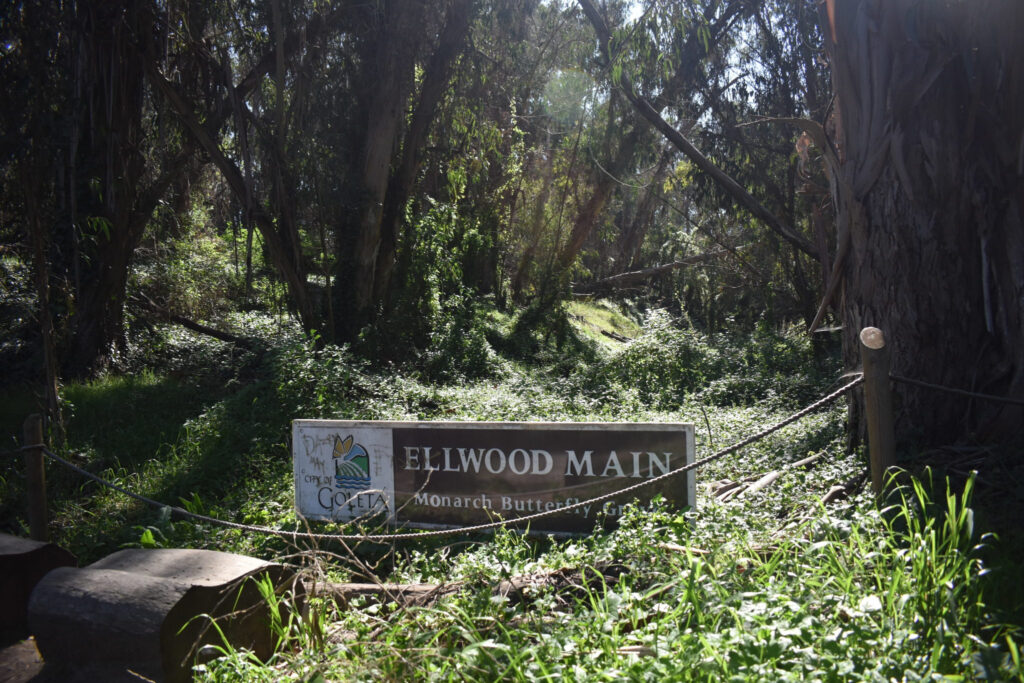 Meade drew attention to the condition necessary for healthy overwintering in monarchs, namely dappled light, protection from temperature extremes and protection from inclement weather such as storms and wind.

“The main thing they need to do is nothing. The point of being in an aggregation site is to make it to the mating period in the spring. And the best way to do it is just to sit tight and hang on a branch,” Meade said.

Another factor to consider, according to Meade, is the influence of warming temperatures on monarch butterflies, the effect of which is not entirely known.

“From the 1980s to today, San Diego County saw a 2.4 degree rise. That’s a really big rise. In San Diego County and Los Angeles now, you just don’t find any butterflies. There’s just not an aggregation in those locations. A lot of the counts that were done down there, counting this last year, were zeros, up until Ventura really,” Meade said.

“So that’s a factor that can really be important. [But] we just don’t know whether there is a threshold — will it begin at 3 degrees, or 2.4 — and then suddenly the average temperature is too high for an overwinter period. We just had no idea if that’s the case or not.”

A related change has also been observed in the timing of the peaks in overwintering numbers among monarch butterflies, with counts in Ellwood peaking in November, rather than January as it had in years prior.

After Meade concluded, Thomson went on to speak regarding Goleta’s plans to rehabilitate Ellwood and reestablish its importance as a crucial overwintering site for monarch butterflies on the Central Coast.

In Ellwood, enormous swathes of eucalyptus trees in the grove are dead, with many having fallen.

“So we’re talking about a land area three times the size of Girsh Park with 1,700 dead trees — probably more now — trees that are dead or soon to be dead.”

Plans to remove the trees and proceed with the plantings of saplings, as outlined by Thomson, are not without controversy. Members of the audience brought forth the point that any alterations to the plant life in Ellwood affects life beyond butterflies. Dead trees provide habitat for woodpeckers, while felled trees provide cover for native rodents and other mammals.

Thomson also cited human impacts, such as traffic and suburban overdevelopment, which have also disrupted the overwintering sites of monarch butterflies in Ellwood.

“I met with one member of the audience earlier this week and he talked about, ‘Is it appropriate to have a wedding event in the grove?’ Perhaps not,” Thomson said, somewhat sardonically, admitting afterward that misuse of the grove has been an issue in the past.

However, frustration among those in the community has grown as years pass with little progress and further damage to the grove becomes evident. Plans to rehabilitate Ellwood have existed in some form or another since 2011.

“[This is] the plan that we’re talking about: We’re going to remove 65 downed trees and remove five standing dead trees, plant native plants and then plant 63 Eucalyptus. So what’s happened with that plan? We actually got the coastal development permit issued in October 2019. So we have the permit in hand.”

Now, six special conditions must be fulfilled in order to submit a final implementation plan, according to Thomson.

Despite the ambitious long-term goal, Thomson took care not to downplay the severity of the issue or the challenges to come.

“How do we come together to make effective change and not get depressed about the current situation? It is daunting. It is a continental issue that we’re trying to deal with here,” Thomson said. “We’re kind of in a crisis situation, and this data that Dan [Meade] was showing today really strikes to the core of the issue and how bad it is. It is really bad now.“