UC Santa Barbara boasts one of the highest rates of student voter registration in the country — at 40.2% in 2018. The lead-up to the March 3 California primary included voter registration efforts from various student organizations who mobilized to get as many students registered as possible before the Feb. 18 deadline. 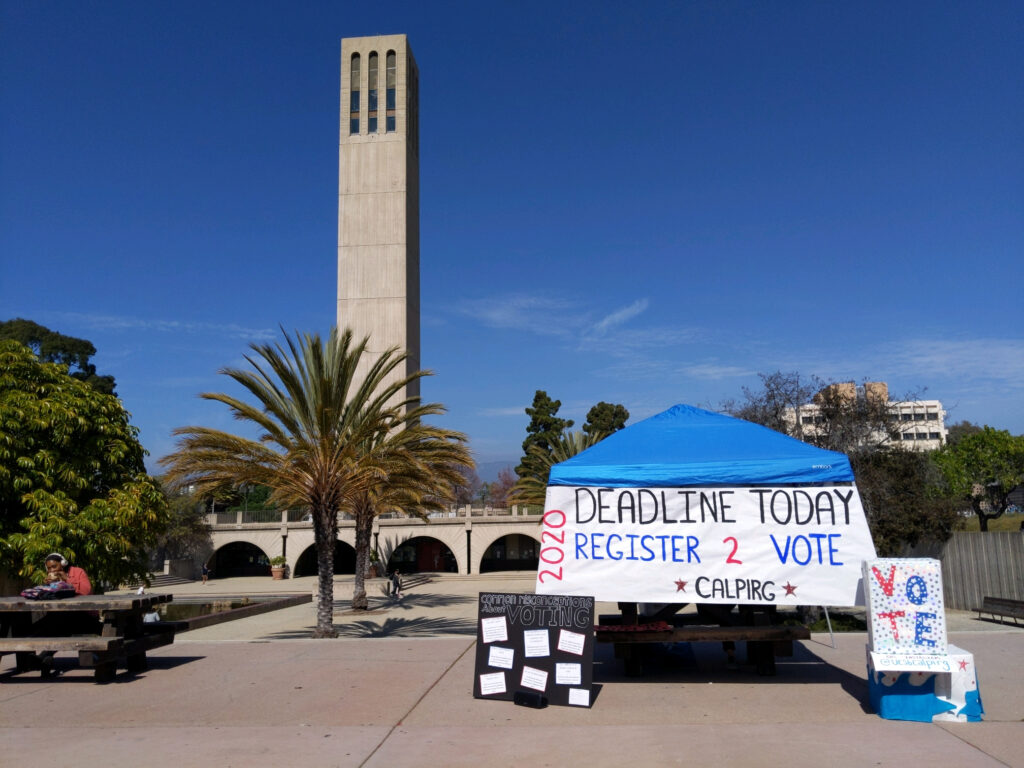 “For example, for move-in weekend, we go to around 80 different meetings, all the floor meetings at every res hall,” Marsano said. “And we’ve registered between 2,800 and 3,000 students in two evenings.”

According to Marsano, the Higher Education Act of 1998 requires universities to make a good-faith effort to inform students about voter registration forms and distribute them throughout campus.

In I.V., registration numbers have peaked at 13,000 registered voters during presidential election years, according to Marsano. As of the 2010 census, more than 23,000 people live in I.V.

While the deadline has passed to register for the March primary, the work is hardly over for Marsano, with the November 2020 election right around the corner.

“I anticipate that this upcoming presidential election will be busy. Of course, we will only have three and a half weeks to register students because they come back the last week of September and the deadline to register next year is October 19 and elections are November 3,” Marsano said.

She attributed UCSB’s high voter registration percentage to a greater push for in-person registration, opposed to online registration as most other universities do.

“UCSB’s notorious about preferring face-to-face voter registration rather than online,” Marsano explained. “You would get a card and if you didn’t do something with that card and mail it back, you would not be really registered. So the follow-up was more complicated.”

Education is another important factor in the voting process that many of the organizations take on in addition to registration, according to Christian Ornelas, the Executive Vice President for Local Affairs (EVPLA).

For example, Ornelas noted that the EVPLA office attempted to clear misinformation about voting after Rock the Vote SB’s national organization declared the local chapter illegitimate.

After their first big efforts for registry during welcome week at campus dorms, Natalie Bastawros, vice president of Campus Democrats, said the VRVC went to great lengths to make sure everyone had the opportunity to register to vote in Santa Barbara County.

“The goal of the club is to try to make it easier for people to register,” Bastawros said about the VRVC. She explained that if an individual registers online within Santa Barbara County, and they miss a box or two, the county sends you back an additional form in the mail for you to fill out.

“Organizations pushing for voter registration often face resistance from students who are already registered, but in a different county. A big part of tabling is educating students how local policies can have significant impact,” Bastawros said.

“It might not seem like that on the national level, but for the local elections here as students live, whether you live on campus or in I.V., it’s really, really important to register here.”

On the Feb. 18 voter registration deadline, Campus Democrats tabled at ten different locations on campus up until the 6 p.m. deadline.

I.V. is a “swing district” that determines the 3rd District County Supervisor vote, Bastawros said. While the other districts are fairly unwavering, the 3rd District, which encompasses I.V. and parts of northern and central Santa Barbara County, is often the deciding vote between the more rural 4th and 5th districts and the smaller but more populated 1st and 2nd districts that include Santa Barbara and Carpinteria.