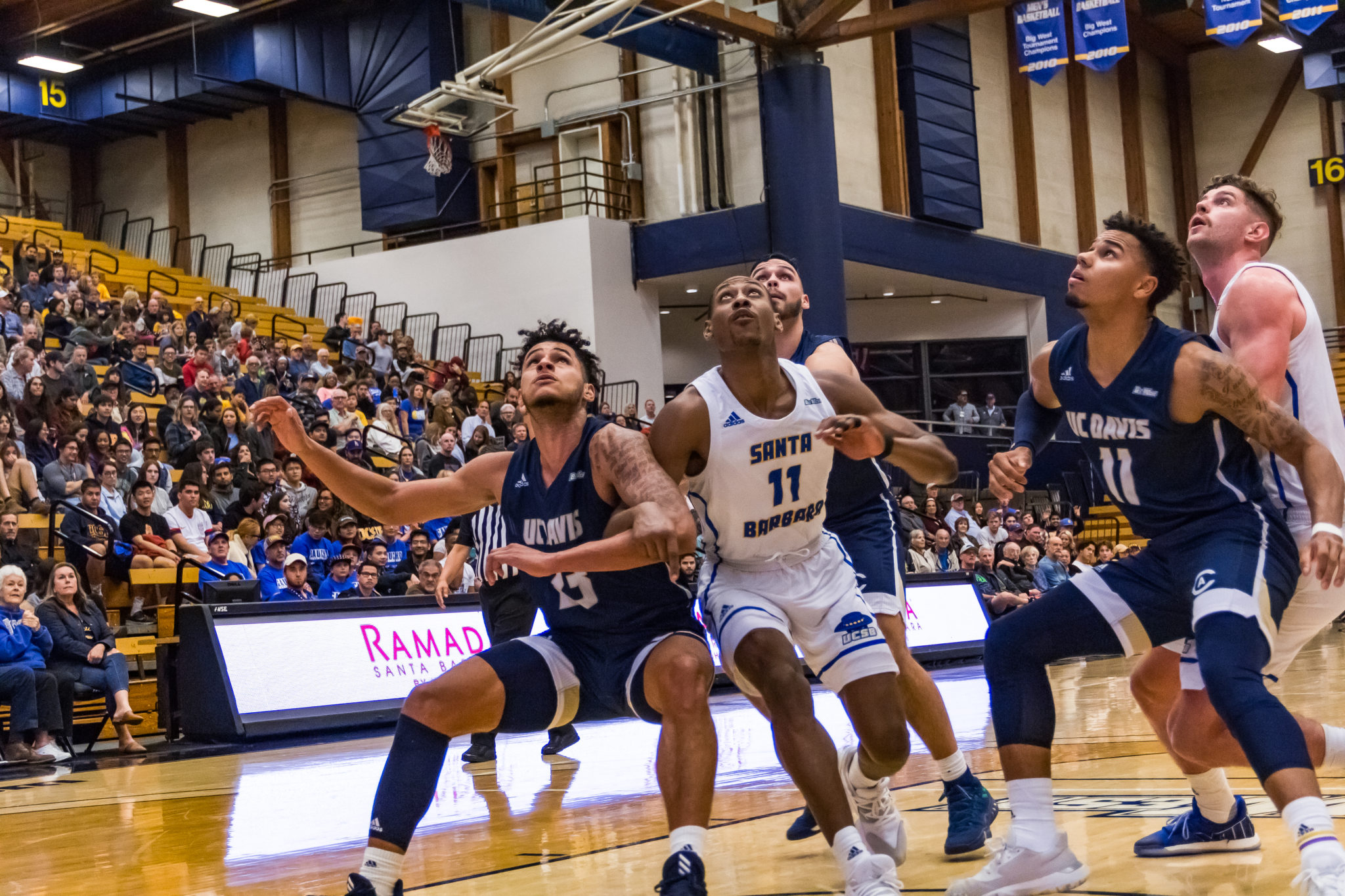 Three-and-a-half games behind UC Irvine for first place in the Big West, a half-game ahead of UC Davis for second and with just four games left in the regular season, the name of the game now for the UC Santa Barbara men’s basketball team is protecting its seeding heading into the Big West Tournament.

Winners of five of their last six games, the Gauchos appear poised to do just that. The team will have to learn from its early-season mistakes, however.

UCSB entered Big West play on a similar roll, but saw a six-game winning streak melt away into a 2-4 conference record. These Gauchos know the importance of not coasting or resting on past success, and that their knowledge will be tested this week.

First up on the schedule is UC Riverside on the road on Thursday, followed by an away game at league-leader UC Irvine on Saturday. UCSB has already beaten both teams in close games at the Thunderdome.

UC Riverside is 15-14 overall and 5-8 in conference play, which has the team second-to-last in the Big West. The Highlanders fell 65-63 to the Gauchos in a late January  thriller that saw senior guard Max Heidegger drill a go-ahead three with 2.9 seconds remaining in the game.

Heidegger  has been flying high as of late, along with his team. The senior won Big West Player of the Week honors for his play last week, as he averaged 22 points and 4.5 rebounds and assists per game in UCSB’s wins over Cal State Fullerton and UC Davis.

UCR has seen middling success overall, but they’ve been a different team at home. The Highlanders are 10-4  in the Student Recreation Center Arena in Riverside and fell just 4 points short of a home upset against UC Irvine earlier this month.

“They had Irvine beat,” UCSB Head Coach Joe Pasternack said. “They were up 7 with about 4 points to go at home versus Irvine. They’re really good at home. We went there last year and got beat. It’s a tough place to play.”

“They’re the ninth-slowest team in our league [out of 9],” Pasternack  said. “They grind it out and it’s a grind every single game against them.”

Big benches are often the province of up-tempo teams, but UCR bucks that trend with 12 out of 13 rostered players playing at least 10 minutes per game. UCSB, on the other hand, plays only nine of its 12 players double-digit minutes per game.

The Highlanders don’t just have a big bench; they’ve got big players, too. Sophomore center Callum McRae is the biggest at 7’1”, but redshirt sophomore big-man Angus McWilliam  and redshirt junior forward Arinze Chidom both clock in at over 6’9” themselves.

“They’re a big, big team,” Pasternack  said. “They do a great job of game-planning and scouting […] We’re going to have to do a great job, all five players, of rebounding.”

To combat UCR’s size, Pasternack  plans to play Gaucho sophomore forward Amadou Sow and junior forward Robinson Idehen at the same time on Thursday. That’s been a rare sight so far this season and could take some getting used to.

UCSB last faced UCR during a low point in their season, after losing three straight games in early Big West play. The Gauchos played from behind for almost all of that first game, but the team’s recent success suggests Thursday could be a different story.

After UC Riverside, UCSB takes on UC Irvine in a marquee Big West matchup.  The crown jewel of the Gauchos’ current string of wins is a 64-61 victory over the Anteaters on Feb. 8,  a game Irvine likely hasn’t forgotten.

UCSB won that game despite blowing a 41-24 second-half lead in front of their home crowd. UCI roared back from the deficit to take a 58-55 lead late in the game, but the Gauchos managed to right the ship and close out their conference rivals.

A similar performance on Saturday probably won’t cut it against a team that has been almost unbeatable on its home court. The Anteaters are 10-1 in Irvine, the one loss an upset at the hands of Cal Baptist early in the season.

In conference play, UCI has lost to only UCSB and Long Beach State and has won its last four games heading into a Thursday matchup with last-place Cal Poly.  A win on Thursday will clinch the regular-season title for the Anteaters.

UCI is second best in the Big West in points scored and points allowed per game, which is always a deadly combination. As the Feb. 8 game showed, the Anteaters’ overall strength means they’re never really out of contention in any game.

A win on Saturday will be a difficult task for the Gauchos, but they have already proved that they are capable of it this season. UCSB’s case will be greatly aided if the team manages to avoid another massive second-half collapse.

Beating UCR will help solidify the Gauchos’ second-place standing in the Big West and beating UCI will give the team a burst heading into the postseason. Two wins will send a strong message to the rest of the conference that this UCSB team is ready to play deep into March.

The Gauchos travel to Riverside to take on the Highlanders on Thursday at 7 p.m. and then swing over to Irvine to play the Anteaters on Saturday, also at 7 p.m.