The Daily Nexus
UCSB COLA Movement
UCGPC President Says Napolitano Meeting Is Not To Negotiate a COLA
February 24, 2020 at 10:55 pm by Max Abrams

The UC Office of the President announced on Friday that it would be holding a meeting with the UC Graduate and Professional Council to discuss a number of issues, including housing and the cost of living among graduate students — seemingly, to supporters of the COLA movement, in response to the cost-of-living adjustment movement sweeping UC campuses.

But in a statement released on Saturday afternoon, the UC Graduate and Professional Council (UCGPC) said it agreed on Friday to meet with UC President Janet Napolitano to discuss “joint advocacy opportunities with the state legislature, not to negotiate a cost of living adjustment or union contracts for students at UC-Santa Cruz or systemwide.” 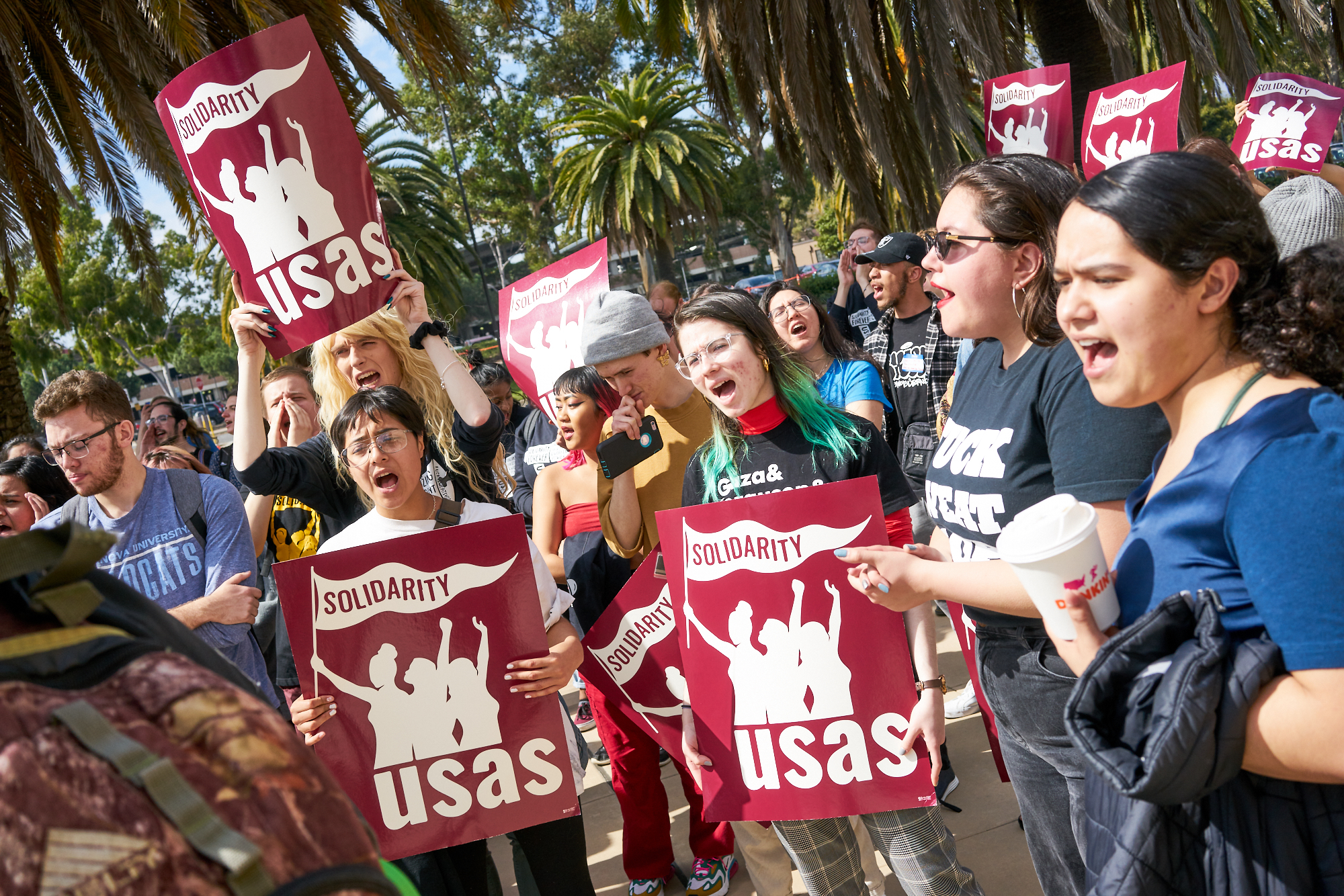 Last Friday, around 500 UC Santa Barbara graduate students marched from the University Library to Cheadle Hall, where they occupied the space from 8 a.m. to midnight. Sicheng Wang/Daily Nexus

UCGPC represents graduate students throughout the UC system and is a form of student government, according to Connor Strobel, UC Irvine graduate student and president of UCGPC. He added that UCGPC performs systemwide and statewide advocacy and often works with the UC Board of Regents and the UC Office of the President (UCOP).

Strobel said that the timing of the UCOP’s press release on Friday, combined with language that alluded to the potential discussion of a COLA, led some groups such as UCSC’s Graduate Student Association (GSA) to feel as if the UC was trying to circumvent ongoing demands for a COLA from organizers.

Strobel described the incident as a “misunderstanding” and said that UCGPC meets with Napolitano on a yearly basis, and, after its meeting in January 2020, UCGPC wanted to follow up with Napolitano on a handful of other issues. On Friday, Strobel said he was contacted by UCOP to meet again, to which UCGPC agreed.

The first discussion item listed in the UCOP press release was “cost of living,” followed by “housing.” Strobel maintained, however, that the meeting will not be about discussing a COLA.

“The whole genesis of a potential board meeting with [Napolitano] and her team was to talk about state advocacy and some of the issues facing graduate students,” Strobel said. “But we’re not negotiating.”

“And that’s a sentiment she also expressed to me,” he added.

Graduate students across the UC system have now begun organizing for COLAs of their own, and at UC Santa Cruz, where graduate students have been on a formal strike since Feb. 10, they have withheld Fall Quarter 2019 grades as part of a wildcat strike. Last Friday, around 500 UC Santa Barbara graduate students marched from the University Library to Cheadle Hall, where they occupied the space from 8 a.m. to midnight in solidarity with UCSC graduate students who were given a midnight deadline on Feb. 21 to end their strike and submit the grades.

As of today, UCSC graduate students are still on strike, as the original Feb. 21 “doomsday” deadline to submit Fall Quarter 2019 grades was extended to Feb. 27, according to an email sent to faculty and graduate students from Interim Campus Provost and Executive Vice Chancellor Lori Kletzer.

In response to the UCOP press release sent out on Friday, UCSC’s GSA sent an email to Napolitano, noting that UCSC does not have any representation on the council that she would be meeting with.

“For many reasons including, but not limited to, the fact that [UCGPC] does not represent our campus in any leadership or representational capacity, we are sorry to inform you that any decisions at which you may collectively arrive will not impact our organizing or our conviction,” the UCSC GSA wrote.

On Friday, Cierra Sorin, president of UCSB’s GSA, said that the UCOP’s press release announcing a meeting with UCGPC was “uninspiring.”

“While I don’t agree with that decision to reach out to UCGPC necessarily, since they have been pretty anti-COLA, I think it makes sense from a bureaucratic perspective,” she said.

Although Sorin said she doubted that UCGPC will specifically discuss a COLA at their meeting, she commented on UCGPC’s previous meeting at UCSB in early January, where she said “most of the folks in that room were anti-COLA.”

Despite Sorin’s comments, Strobel said that UCGPC’s role is unrelated to the COLA movement. UCGPC is trying to alleviate rent burden through other measures, he said, such as reducing the cost of living for graduate students rather than advocating for a COLA.

“We’ve tried to go about it both in the the cost mitigating way, which is sort of open turf, like anyone can work on it,” Strobel said.

“And then in terms of increasing pay, that’s a little more of a complicated dance because you have other stakeholders who have been working on the issue for a long time, who have the legal first dibs to it, like the union, in which case we played an important, coalitionary partner to some of those folks,” he continued.

Unlike United Auto Workers 2865 (UAW 2865), the union that represents UC student workers at the bargaining table, UCGPC is a form of student of student government that describes its role as “complementary” to unions, according to the statement, and plans to continue advocating to “reduce the financial burden” of graduate students’ living expenses.

In the midst of an ongoing battle between graduate students and the UC, Strobel asserted that UCGPC has no plan to negotiate a COLA in its upcoming meeting.

“I do think it was an honest misunderstanding,” he said.