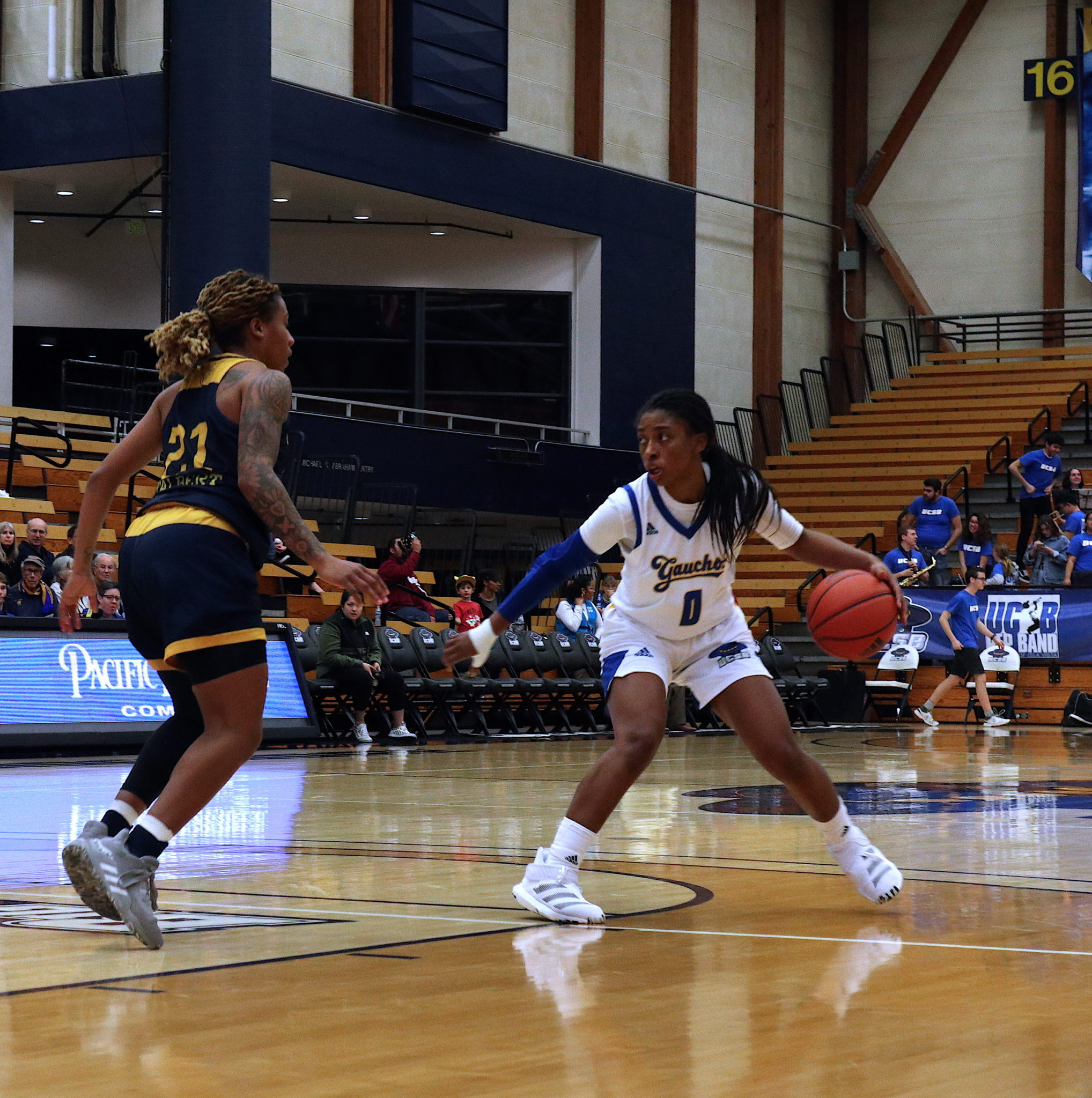 The UCSB women’s basketball team didn’t score until 3:42 left in the first quarter on Thursday.

Then, the Gauchos ripped off a 23-4 run, opening up a 17-point lead that the team would never lose en-route to a 65-60 victory over Cal State Northridge (CSUN).

In the first quarter, Santa Barbara struggled to deal with the 2-3 zone that CSUN ran — especially because the team’s perimeter shots weren’t falling.

“At first, we were sped up,” junior point guard Danae Miller said. “We felt the energy coming into the game, but once we settled down, we got right into our groove.”

Once Miller, senior guard Tal Sahar and senior guard Coco Miller each hit a 3 on consecutive possessions to stretch the zone, the ‘Chos were able to get the offense going.

For the most part, the Matadors did an admirable job of slowing down freshman forward-center Ila Lane on the offensive end. In one of her least efficient performances of the season, Lane finished the game shooting only 35.3% from the floor.

“They were physical with [Lane], so she couldn’t get high-percentage catches,” Head Coach Bonnie Henrickson said.

In a testament to Lane’s talent and effort, however, the freshman phenom still finished the game with her 16th double-double of the season, logging 19 points and 13 rebounds on the night. During one particularly impressive moment in the second quarter, Lane launched her 6-foot-4-inch frame onto the hardwood for a loose ball. After grabbing it, Lane proceeded to run the length of the floor, finishing the play with an easy layup to give the ‘Chos an 18-6 lead.

While her box score wasn’t overly impressive, freshman point guard Johnni Gonzalez turned in one of her finest performances of the season on Thursday. With Coco Miller in foul trouble for most of the night, Gonzalez was forced to be the second ball-handler. Displaying the tantalizing talent she has shown in brief stretches all season, Gonzalez frequently wowed teammates and the crowd with her ability to beat the full-court press. Just before the half, Gonzalez drilled a deep 3 to give UCSB a comfortable 32-15 lead heading into the locker room.

In the second half, however, CSUN came storming back — led in large part by freshman Deja Williams and senior De’Jionae Calloway. The Matadors went on a 19-8 run to kick off the third quarter, with Williams pouring in 12 of her 20 points during the quarter.

“We missed a bunch of shots at the rim, and they were able to get momentum,” Henrickson said. “We need to clean that up and finish stronger.”

With 2:14 left in the third, the Gauchos’ lead had been cut to merely 6 points. Then, Danae Miller made magic happen.

After making 5 of her 6 free throws, Danae Miller found Lane underneath the hoop for an easy layup, opening up a 47-36 lead for the team at the end of the quarter.

In total, Danae Miller finished the game with 21 points, 4 assists, 5 rebounds and an eye-boggling 7 fouls drawn.

While the Matadors kept the pressure on in the fourth, with Calloway chipping in 8 of her 18 points in the quarter, the team was unable to overcome the deficit. CSUN was able to cut the lead to 3 with 10 seconds left, but Gonzalez hit 2 clutch free throws to ensure the ‘Chos came away with the crucial victory.

Now, UCSB must turn its attention to UC Riverside, who knocked off the Gauchos 66-61 earlier this season. Santa Barbara takes on UC Riverside at 2 p.m. on Saturday at the Thunderdome.