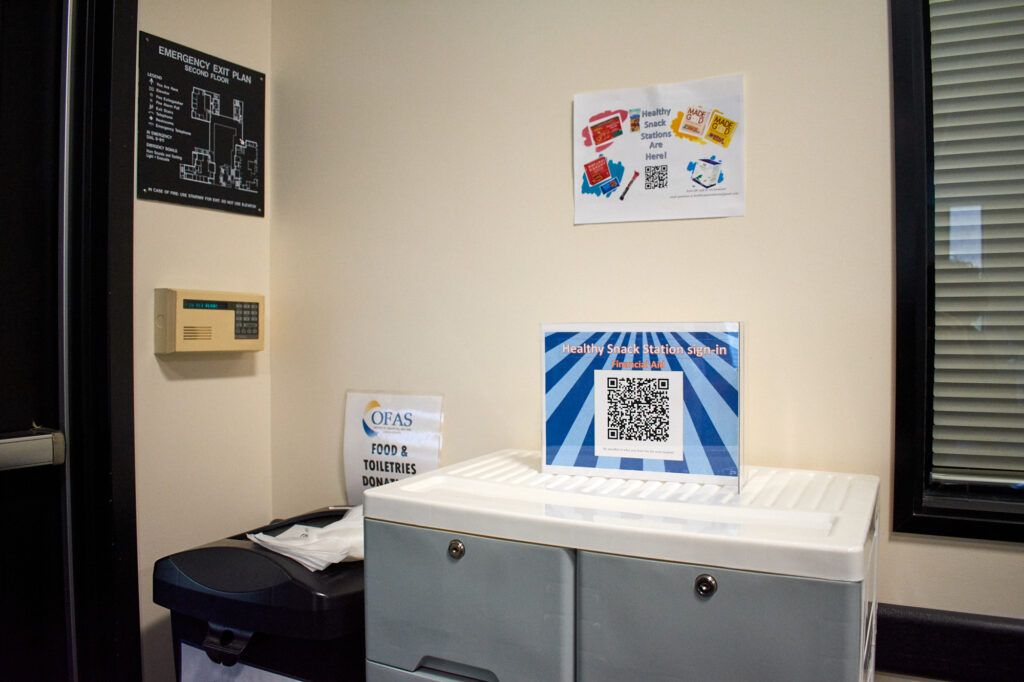 The goal of the stations is to provide hungry students with a quick snack during the middle of their days. Ida Kazerani / Daily Nexus

The Promise Scholar Program is comprised of 500 students who are a part of underrepresented and low-income groups and who have an average family income of $25,000, according to Program Director Holly Roose. Students who qualify for the program are promised an estimated $120,000 in financial aid over four years if they remain Cal Grant or Pell Grant eligible.

Roose said that the goal of the stations is to provide students who are hungry with a quick snack during the middle of their days, with options such as granola bars, trail mix, fig bars and fruit snacks, and to supply menstrual products.

“One of the frustrations that motivated this project was that in order to get into the dining commons and access the [A.S.] Food Bank, you need to have a student ID, and our [Promise Scholar] kids often lose their IDs so $35 is a lot of money to replace it,” Roose said.

The stations have been placed in 10 locations on campus, including the Transfer Student Center, Opening New Doors to Accelerating Success Student Center, UCSB Student Health, the MultiCultural Center, the Office of Financial Aid and Scholarships, El Centro, College of Letters and Sciences Advising in Cheadle Hall, the Athletics Department, the Educational Opportunity Program and the Resource Center for Sexual and Gender Diversity.

Roose explained that the new project was funded by the California government, which allocated around $80,000. The grant is designated to be spent by June and will be a contender for renewal if the project succeeds.

For students with a heavy academic workload, sitting down for a meal during the day is not always feasible. Fifth-year biochemistry and molecular biology major and Promise Scholar Sami Kaayal said the conveniently placed snacks have helped him stay fueled during busy days.

Although the Promise Scholars Program represents low-income students, Roose explained that the healthy snacks and menstrual products are available to all students on campus, regardless of income.

“At the end of the day, I just want hungry students to get food and proper sanitary products.”