Professor and activist Anita Hill spoke to a sold-out crowd at Campbell Hall on Wednesday evening, discussing how the discourse around sexual harassment has evolved in the nearly 30 years since she first gained national attention for accusing then-Supreme Court Justice nominee Clarence Thomas of sexually harassing her in 1991. 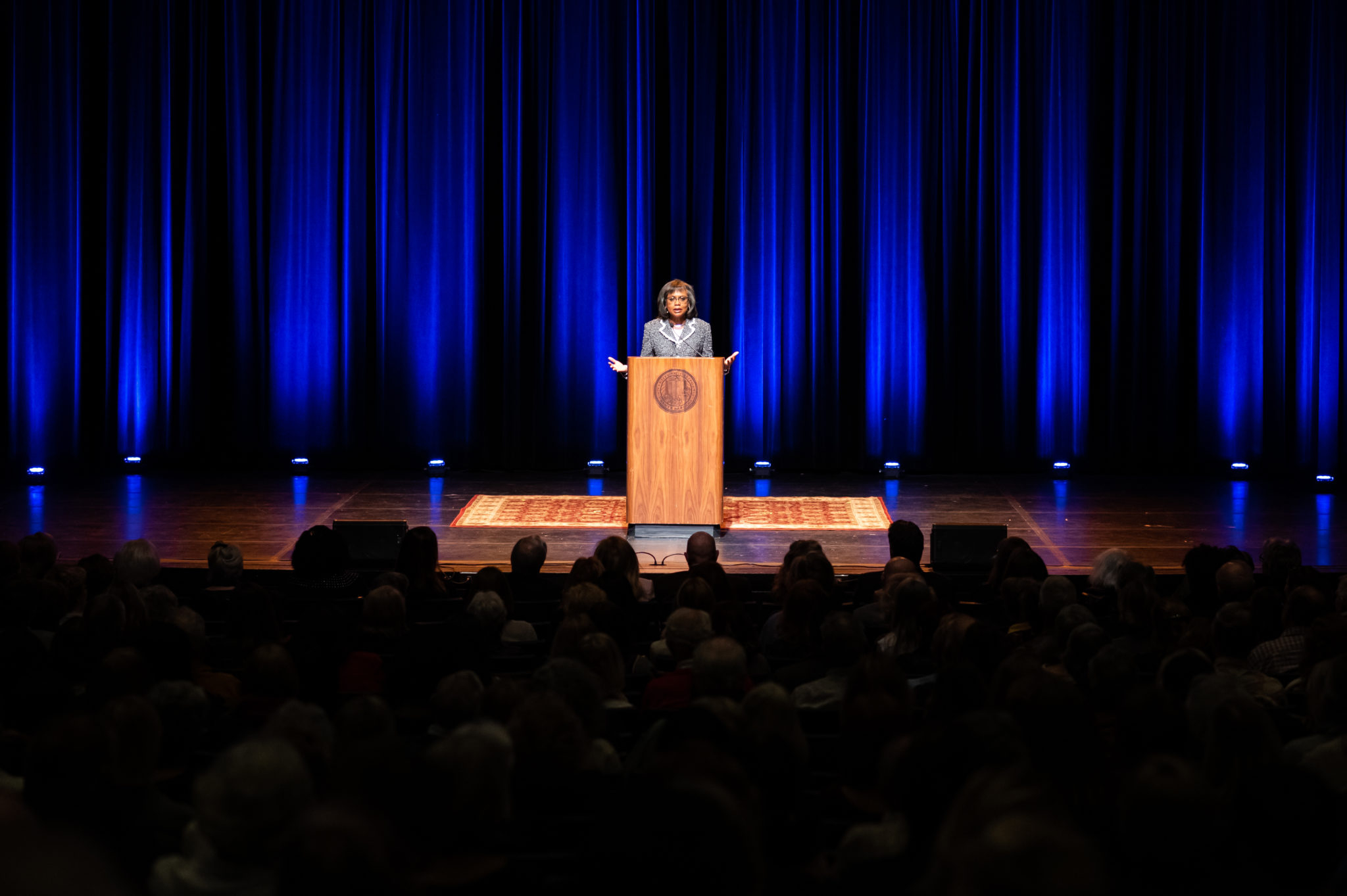 “We can relate to the individual stories, but it is just as important for us to see what is happening on a larger scale, on the social scale, if we are going to address it,” Hill said. Max Abrams/Daily Nexus

Her discussion, titled “From Social Movement to Social Impact: Putting an End to Sexual Harassment,” challenged the audience to expand their personal definitions of gender-based violence and emphasized the structural change required to transform the culture around sexual harassment and violence across the U.S.

Earlier in the afternoon, Hill met with over 30 high school students, undergraduates and graduate students, some of whom are engaged with researching sexual harassment on campus, according to Professor Leila Rupp, associate dean of social sciences, who introduced Hill.

“None of the students this afternoon were even born when Dr. Hill gave her courageous and world-altering testimony before the Senate Judiciary Committee,” Rupp said.

Hill also spoke at UCSB in 1995, and at the beginning of her speech noted that, after 25 years, it is “hard to imagine we are still in the struggle together.”

But Hill did not dwell on her own experiences in the Senate Judiciary Committee and instead focused her speech on the work that still remains after the launch of the #MeToo movement, which reignited the conversation about accountability of those in powerful positions regarding sexual harassment.

Hill noted that her own experiences in the Senate parallel that of Christine Blasey Ford, who in 2017 testified before the Senate Judiciary Committee that then-Supreme Court Justice nominee Brett Kavanaugh sexually assaulted her when she was in high school.

“We have to understand that what happened to Dr. Christine Blasey Ford should never happen again, but we also have to recognize that it is happening every day to somebody in this country,” Hill told the audience.

Hill said that outrage over the Kavanaugh confirmation changed the course of the 2018 midterm election, but that the response from the federal government since then has been lacking.

“No robust government response to gender-based violence has occurred and in this primary cycle, little or no attention has been given to what many call a moment of reckoning that happened back in 2017,” Hill said.

The lack of conversation around sexual violence, Hill said, includes current 2020 Democratic primary candidates, who participated in a debate in Nevada on the night of Hill’s speech.

“We are in another debate tonight and if the history proves to be a reflection of what’s going to happen in the future, those questions are not going to be had,” Hill said.

Hill challenged the audience to expand the way they view gender justice to include not only sexual harassment, but sexual assault, domestic violence, rape and incest. To fully understand the problem of gender-based violence, Hill said that society needs to examine the “bigger picture” of how survivors are treated beyond the specifics of their own experience.

“We can relate to the individual stories, but it is just as important for us to see what is happening on a larger scale, on the social scale, if we are going to address it,” Hill said.

“Our solutions have to be multi-dimensional because the impacts of gender-based violence are multi-dimensional. It impacts [people’s] ability in many cases, depending on the nature of the problem, to have housing, to be educated, to live safely in their communities.”

Hill said that the U.S. government has “taken on huge social problems,” such as the opioid crisis, by addressing the problem as a matter of public safety, and that the same approach needs to be taken to address gender-based violence.

But Hill said that this can’t be left to the government to solve alone, that individuals need to also view gender-based violence as a matter of public safety and “problem solve as a community.”

One structural change Hill proposed to address gender-based violence is to challenge how society as a whole approaches masculinity.

“This idea of manliness is curated to make us believe that to be a man you must be emotionally restrained, strong and brave, aggressive and awesome,” she said.

“[That] is not masculinity, it is abuse.”

Hill also elaborated on what she said is the systematic practice of silencing people who choose to come forward with stories of gender-based violence.

“Believing women to be truthful is consistent with fairness and justice,” she said. “Now all of you believe that, right?”

After cheers and applause from the audience, she continued, “We are now in a time where if we say we believe survivors, we are met with the claim that we are denying due process. In other words, due process has been weaponized to silence survivors.”

“I do not support a system that presumes every time a woman testifies about abuse, she is lying. But that is what many of us start with: that she cannot be trusted to tell the truth,” Hill emphasized.

Hill’s testimony against Thomas in 1991 raised complicated questions about the intersectionality of race and gender, she said. Opponents criticized Hill for coming forward, saying she “did a disservice to the Black community by testifying.”

To those critics, Hill asked for the trust that she believes all survivors deserve.

During the Q&A portion of the event, Hill spoke with UCSB feminist studies graduate students Amoni Thompson and Megan Spencer, answering their questions about her career and life.

Responding to a question from Spencer about solidarity with student movements, Hill expressed her support for UC graduate students calling for a cost-of-living adjustment, a movement known as COLA.

“Affordable housing is an issue for everyone,” Hill said to audience applause. “Unfortunately, most families have to fight that issue on their own, but our students should not have to fight this battle on their own. Universities should be using their resources to help them.”

Hill left the audience with a challenge: No matter how difficult it may be to fully change the culture around gender-based violence, she said, it is just as important now as it was when she first spoke to the Senate in 1991 to fight for structural change.

“It is natural to revert back to the status quo. It’s inevitable. But the problem is so severe, we cannot afford to do that.”