Bacteriophages, or phages for short, are viruses that hijack bacterial cells to reproduce. Phage therapy uses phages to fight bacterial infections. Its main appeal is its potential to work on organisms resistant to antibiotics.

However, concerns regarding phage therapy stem from it being a poorly controlled technique, with an incomplete characterization of phage biology. Risks from phage evolution or its exponential replication create apprehension about its biocontrol, for instance.

Popular in former republics of the Soviet Union, phage therapy is viewed generally as a last-resort option. Treatment is not available in the United States, though clinical interest is increasing with North America’s first phage therapy center having opened at UC San Diego in 2019.

“Despite these problems, people have been turning to phage therapy in extreme situations. Our work is geared toward bringing phage therapy under control so that it can be used safely and more widely,” Irene Chen, an associate professor in UC Santa Barbara’s department of chemistry and biochemistry, wrote in an email.

The study’s results appear in a paper published in the Proceedings of the National Academy of Sciences of the United States of America.

Chen and her team aimed to address phage therapy issues by conjugating the phages to gold nanorods (AuNRs), creating “phanorods.” They worked with UCSB mechanical engineering professor Beth Pruitt and her lab, who provided the proof of concept on the selectivity of phage therapy to target bacterial cells without killing non-harmful cells.

“[W]e were delighted to be part of testing this new exciting technology for the selective killing of bacteria while preserving mammalian cell health in culture,” Pruitt said via email. “This preliminary work supports the idea of using such an approach in a wound healing environment to safely stamp out bacterial infections [with] little or no toxicity to the healing tissue.” 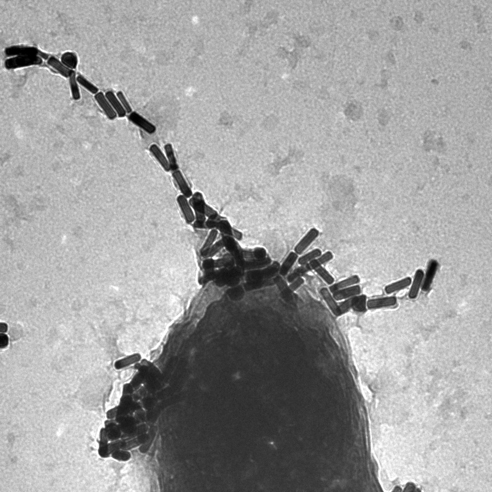 The phanorods were engineered to carefully target certain Gram-negative bacteria including E. coli, P. aeruginosa and V. cholerae which infect humans, and X. campestris, which infects plants. By exciting the AuNRs with near-infrared light, the researchers could locally generate heat to efficiently and selectively kill bacterial cells and the phages themselves, quelling any undesired future phage evolutions or replications.

“When the nanorods are exposed to certain wavelengths of light, they absorb the light and convert the energy to heat (the photothermal effect). This leads to very high local temperatures around the phanorods, which essentially cooks the bacteria as well as the phage, while leaving non-targeted cells alive,” Chen explained.

Huan Peng, a postdoctoral fellow in Chen’s lab, stumbled upon the idea to use AuNRs in phage therapy.

“We were actually initially looking for a quick assay to check the binding of some engineered phages to bacteria,” Chen recalled.

The photothermal effect of AuNRs has been used in nanomedicine techniques to treat cancer, as according to Chen, “that was the genesis of the idea to use the AuNRs to specifically kill bacteria. We then realized that this method would have important advantages over other phage therapy approaches.”

To test the potential of these phanorods further, the researchers applied them to a P. aeruginosa biofilm. Biofilms consist of a dense buildup of bacterial cells. They present a crucial problem in treating bacterial infections due to their greater resistivity to penetration by antibiotics. The assemblage of cells provides an advantage as even after being subjected to antibiotics, more cells can survive than if they were individually exposed to antibiotics.

Chen and her collaborators showed extensive bacterial cell death in the biofilm as a result of the phonorods. They additionally tested how well the phanorods could kill bacterial cells without harming surrounding mammalian cells by using them on a P. aeruginosa biofilm growing directly on top of canine kidney cells. Once again, the scientists were able to demonstrate widespread bacterial cell death along with survival of the majority of kidney cells (84%).

“Showing that biofilms can be destroyed by the phanorods suggests that phanorods might work in physical scenarios when antibiotics might not,” Chen said.

The next major step is to study phage therapy in more realistic models of bacterial infections, according to Chen. “In addition, it is important for us to expand the number of microbes that we can target.”

“Right now there are many reasonable hesitations about phage therapy stemming from the lack of control over these biological entities. We believe that controlling phage therapy in this way could allow phages to become an acceptable therapy for use in antibiotic-resistant infections,” Chen said.