The Daily Nexus
Sports
Red-Hot Gauchos Look To Extend Win Streak Against Aggies
February 13, 2020 at 6:14 am by Spencer Ault 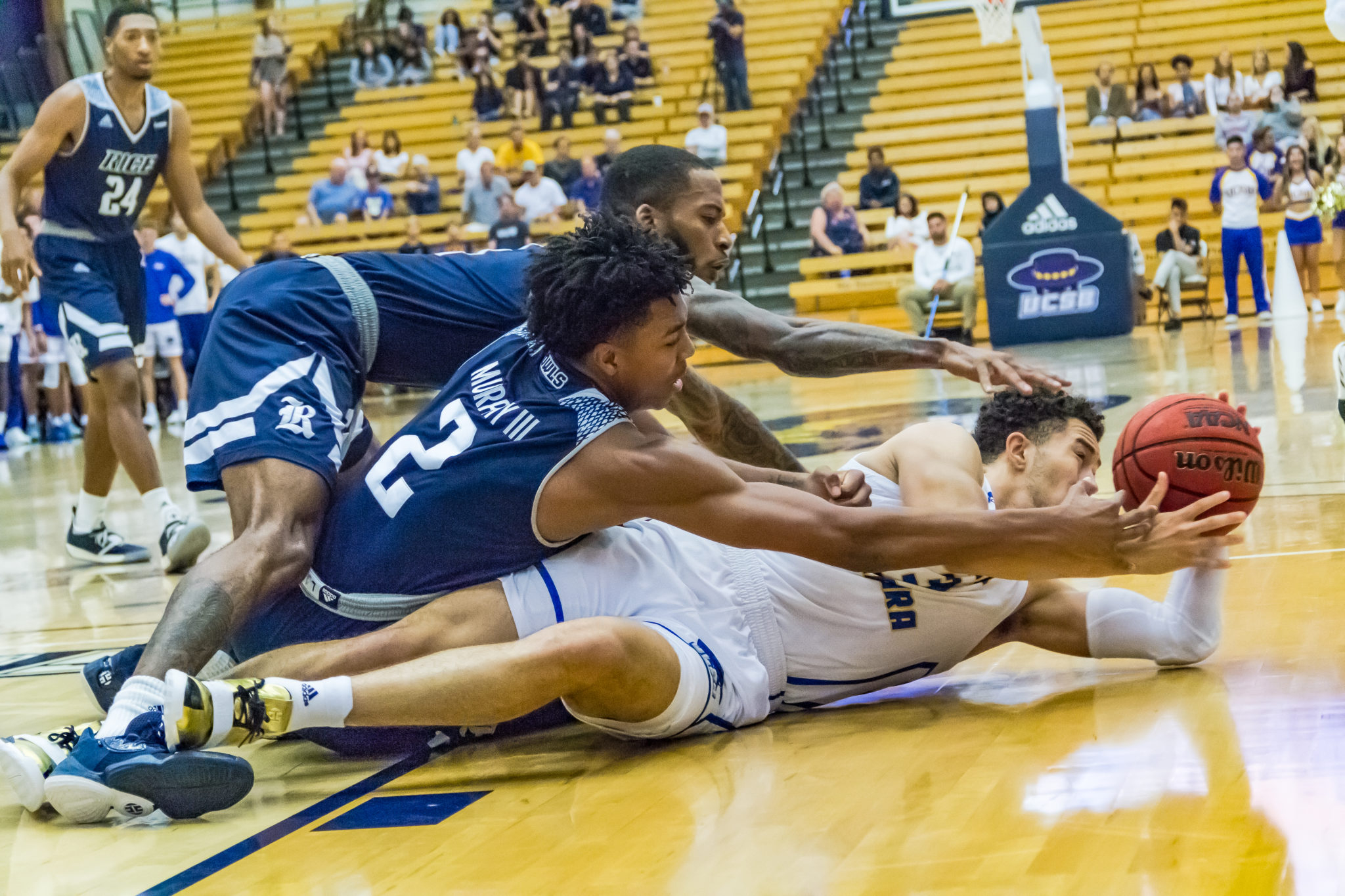 After two huge victories last week, the UC Santa Barbara men’s basketball team is riding high. That could be an issue against UC Davis, whose record and small size make them easy to overlook.

While there’s no easy way to avoid overconfidence, the Gauchos have just the right tool to take advantage of the Aggies’ short stature: sophomore big-man Amadou Sow.

Sow, who earned Big West Player of the Week honors for his team-leading performances in UCSB’s wins over Hawai’i and UC Irvine last week, is on a roll and ready to overwhelm UC Davis. The Aggies are 10-15 overall this season and 4-5 in the Big West and have exactly one player over 6’3” who plays more than 20 minutes per game.

UC Irvine recently pulled off a season sweep of UC Davis and provided UCSB with a blueprint on how to do so. The Anteaters’ size was too much for the Aggies, whom they outscored 74-30 in the paint and outrebounded by a combined total of 25 rebounds.

Sow will get his chance to do similar damage on Thursday night in Davis. The sophomore is coming off of a dominant week that saw him set a career high for points with 30 in the Hawai’i game and then followed that up with a 21-point, 10-rebound performance against UC Irvine.

“Amadou has done a great job,” UCSB Head Coach Joe Pasternack said. “He’s had some poor basketball games, and he’s done an amazing job of recovering, and I’m really happy for him.”

UC Davis’ lack of size presents opportunities not just for the Gaucho big men, but for the guards as well. Senior Max Heidegger and junior JaQuori McLaughlin both excel at getting inside and finishing at the rim, and they should have plenty of opportunities to do so against an Aggie team that blocks a Big West-worst 1.8 shots a game.

While they don’t block very many shots, UCD does boast some of the quickest hands on the West Coast. The Aggies average 6.1 steals per game this season and have forced a conference-best 14.2 turnovers per game in conference play.

“UC Davis is number one in the conference at forcing turnovers,” Pasternack said. “That’s their best thing they do. They really do a great job of defending the three and forcing turnovers.”

On the other end of the court, UC Davis tends to live and die by the 3-pointer. The Aggies are shooting a stunning 40.1% from 3-point land in conference play, and they lead the Big West with 79 made 3-pointers against conference opponents.

“Matchups are very hard [against UC Davis],” Pasternack said. “They’re very small, and they can really shoot the ball. We’re going to be challenged to defend the three.”

Senior guard Stefan Gonzalez isn’t just UCD’s top sniper; he’s one of the best shooters in the country. Gonzalez is third in the NCAA with a .479 3-point field goal percentage and makes about three 3-pointers a game.

When Gonzalez is clicking, and he has been in pretty much every game this season, there’s not much the opposing team can do but relentlessly deny him the ball.

Gonzalez’s fellow senior guard Joe Mooney is UC Davis’ leading scorer with 13.2 points per game, although he’s scored in the single digits in five of his last six games. Freshman point guard Ezra Manjon has stepped up instead with 15.4 points per game in Big West play while averaging 4.2 assists per game over that same time span.

The Aggies have won two of their last three games, with the most recent win an 87-81 victory over Cal State Fullerton that saw sophomore forward Caleb Fuller explode for a career-high 23 points. UCD’s 4-5 conference record is somewhat middling but is just a game back of UCSB for third place in the Big West.

For the Gauchos, the task on Thursday evening will be to keep the Aggies from doing too much damage from behind the 3-point line and to stay steady after three wins in a row. The winning streak and the feeling of beating two of the Big West’s best in Hawai’i and UC Irvine is undoubtedly intoxicating, but UC Davis won’t be forgiving if UCSB gets too cocky.

“Every single game has a different life of its own,” Pasternack said. “We just have to keep playing team basketball and sharing the basketball and getting assists and defending.”

The Gauchos are far from a Goliath, even with three wins in a row, but they’d still do well to follow that prescription when they take on the David-sized UC Davis team.

UCSB plays UC Davis in Davis on Thursday at 7 p.m.