The University Council-American Federation of Teachers held a rally on Monday in front of UC Santa Barbara’s University Library and marched to Cheadle Hall in support of better pay and teaching conditions for lecturers following the union’s contract expiration on Jan. 31, after nine months of contract negotiations. 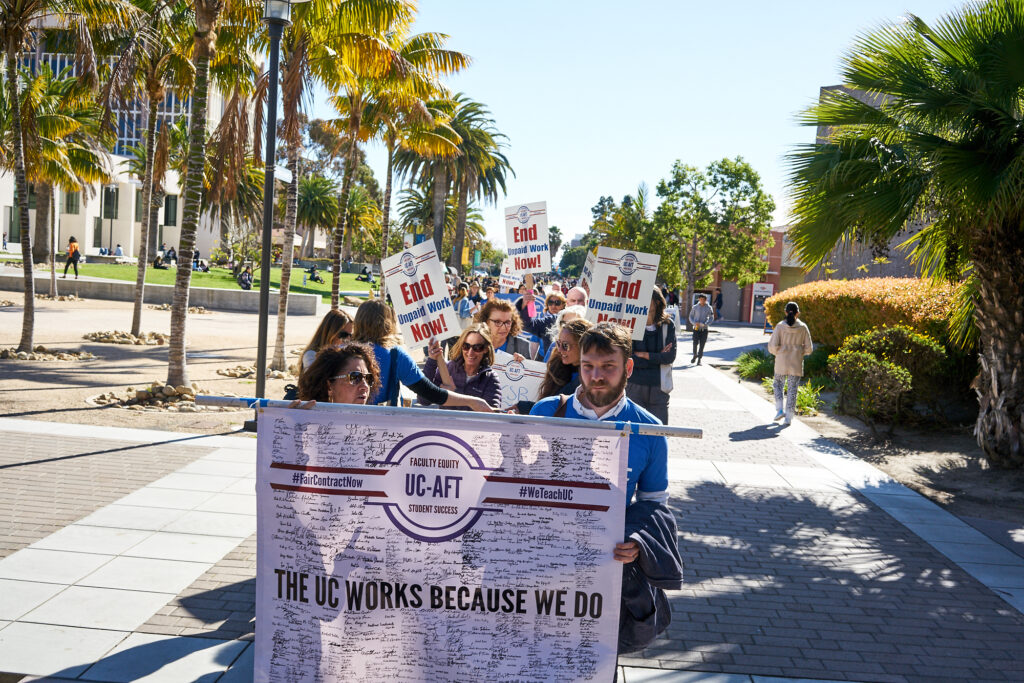 According to a statement released by the University Council-American Federation of Teachers (UC-AFT) on Feb. 1, “the UC has yet to make a serious proposal on any of [UC-AFT’s] key demands,” such as longer-term appointments and fair workload standards. The rally at UCSB was part of a UC-wide movement at each of the campuses in protest of the negotiations.

The rally garnered a crowd of approximately 40 lecturers and union members. Various lecturers from UCSB shared their experiences on teaching, along with their desires to see improvements in their contracts with the university.

“We are creating the next generation of leaders, but we do need now fair wages, fair working conditions and equitable treatment and respect,” Deborah Williams, a lecturer in the department of environmental studies, said to the crowd.

After the speeches, people gathered together to sing a song in demand of equitable treatment for lecturers. The statewide UC-AFT plans to splice together videos of the rally songs from every UC campus.

One speaker referenced the six strikes the American Federation of State, County and Municipal Employees (AFSCME) Local 3299 held for contract negotiations, alongside protests against the university’s alleged illegal outsourcing.

“Sometimes it’s going to be tough, but AFSCME just had three years without a contract. They had six strikes over the period of that time and they ultimately beat the university back on contracting out,” the speaker said.

The rally continued with a march to the fifth floor of Cheadle Hall, where the protesters intended to voice their concerns and pass brightly colored cards containing student support and comments to David Marshall, the executive vice chancellor of the university.

As the march reached the Office of the Executive Vice Chancellor — where Marshall was absent — the protesters passed along messages to office staff.

“We make up well over half of the teaching power of this institution. If David Marshall and other people want us to succeed and want the UC to succeed, they need to pay us living wages,” one protester said in Cheadle Hall.

A major point of contention among protestors revolves around the workload lecturers have. While tenure-track professors only have to teach four or five courses per year, lecturers have to pick up seven or eight courses a year at a lower pay, according to James Donelan, associate director of the Writing Program and a negotiator with UC-AFT.

The higher workload forces lecturers to spend less time developing their courses and helping students, whereas tenure-track professors are able to conduct research with the extra time they have available, according to Aazam Feiz, a lecturer in Persian language and literature.

Feiz talked about how she pushed to expand the teaching of the Persian language at UCSB since coming to the university in 2016 — a move that she said she did out of love for teaching, her students and the language.

“Creating these courses, doing these things, I have done it myself. So, if I am paid well and if I have a secure job, I can do these things more,” Feiz said.

“We have family, we should think about our lives. So, people may think about finding another job, a place that they appreciate and work more,” Feiz explained. “I have 60 students here and I have one right at home too. I need to think about my child too.”

According to Donelan, lecturers have no way to climb the ladder and get on the tenure path. In order to be hired on the tenure track, people have to compete in the university’s national search for a professor; a lecturer cannot be “promoted” to tenure track.

“You can get promoted within at any major corporation, but you can’t do it at a university. You can’t change that track,” Donelan said.

“It’s part of how the university continues a tradition of excellence, picking the absolute best candidates from wherever, but it also eliminates any kind of possibility for lecturers to stop being anything other than lecturers.”