The Daily Nexus
Opinion
Remembering Kobe: Reflections on the Loss of a Legend
January 30, 2020 at 8:00 am by Kian Karamdashti 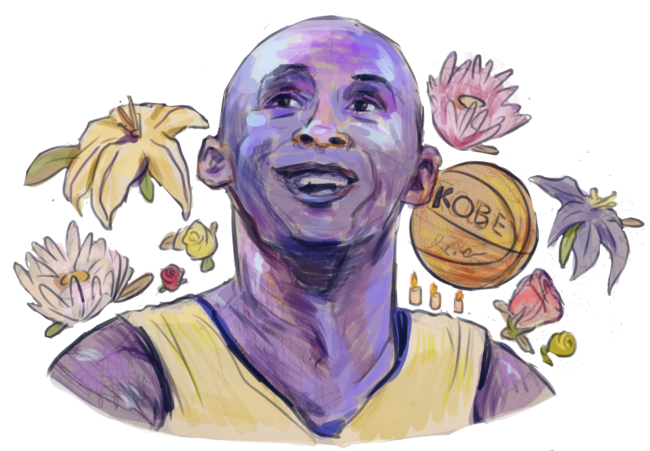 “Look at that night over there.”

“No, the fog rolling in. That stuff is my worst nightmare.”

I looked at what he was pointing at and saw a gloomy fog looming behind the majestic orange sunset.

It was Saturday evening. My pilot friend and I had a brief conversation on his Del Playa Drive balcony regarding the dangers and fears of flying in foggy conditions. It seemed like such a random and inconsequential conversation at the time. Afterward, I went on with my Saturday night not thinking anything of it. As many may know, it never really feels like anything that happens in Isla Vista has a connection to the real world, much less an effect on the people that we see under bright lights on television.

On Sunday morning at 9:47 a.m., a helicopter crashed into a steep hillside in Calabasas, killing all nine people on board. Along with seven other victims, the helicopter carried NBA legend Kobe Bryant and his daughter Gianna Bryant, an up-and-coming basketball player. The exact cause of the helicopter crash is still being determined; however, authorities suspect that low visibility was a major factor.

Seeing the words “Kobe Bryant is among those dead in a helicopter crash outside Los Angeles, a source confirms,” at the top of my Twitter feed was a surreal feeling. A feeling that I still can’t wrap my head around. My shift at work that day was a hazy, gloomy daze. I couldn’t stop picking up my phone every two to three minutes hoping for news that it was a false report. The group chats on my phone were alight as my friends and I struggled to piece together how a man who was such a staple of American culture could be gone with the snap of a finger.

In those moments, I couldn’t seem to comprehend why I cared this much about Kobe Bryant and the way he bowed out. Why was I so frantically refreshing my feed, hoping this was all just some sick joke?

I mean, you could argue that I used to hate this guy. He was the asshole villian that always seemed to crush the dreams of my then-underdog team, the Golden State Warriors. The cocky demeanor. The stone-cold expressions. The trash talk to opposing players that he always backed up with his moves. He was the big dog every time he stepped on the court. A man no one could ever step up to and emerge as the victor. A man who once confiscated his teammates’ pairs of his very own model shoes because they lost a game and he deemed they were too “soft” to wear them.

Kobe outwardly cared about the people around him, which was refreshing behavior from an A-list celebrity.

The only other celebrity death that has ever affected me was Mac Miller’s passing in September 2018. I was a fan of the man’s art and craft and truly resonated with the emotions and feelings that he brought to his music. It was often the soundtrack to my days and weeks; his evolution as an artist coincided with my own evolution into a grown man. As a guy who shows little emotion, it felt odd that Mac’s death bothered me. I didn’t know the guy at all and he certainly had no idea who I was. But I at least had the emotional connection I felt to his music to provide context for those feelings. So why did Kobe’s sudden death feel much more difficult to comprehend? Why did the death of a man who had been putting balls through hoops for my rival team since I was born conjure up such distraught emotions within me?

No one likes to talk about it, especially in the wake of his passing, but it would not be appropriate to discuss Kobe’s legacy without also mentioning the sexual assault allegations against him from 2003. The conclusion to the case did little to alleviate concerns of his guilt. It is not my place to evaluate the details of what may or may not have happened that night, but it is important in today’s era of accountability that the existence of the claim is addressed rather than swept under the rug. It is part of his complicated story, whether people like it or not.

With all of these factors in mind, I didn’t have much of a reason to feel an emotional attachment to this man. Yet over the years, I grew to respect the guy more and more.

In an era in which retired basketball players routinely criticize today’s generation, Kobe was one of the few that uplifted and supported today’s basketball stars. He was completely secure in his accomplishments and career, never feeling the need to bring new players down. He was an advocate for social justice, endorsing individuals such as the San Francisco 49ers quarterback Colin Kaepernick in a time when it was financially risky to do so.

Most of all, he honestly seemed like the ultimate family man in his post-retirement days. I had assumed Kobe was the kind of guy who would harp on and on about his glory days long after he stopped playing, but one look at his Instagram feed tells a totally different story. Picture after picture features other people: his family, his wife and kids, his former teammates, even photos of his daughter’s basketball team. It takes a solid 15 seconds of scrolling to find even one picture of his famous purple and gold Lakers uniform, and even that photo included an ode to a former coach. Kobe outwardly cared about the people around him, which was refreshing behavior from an A-list celebrity, especially in a world where personal recognition is intensely sought after.

This familial love was particularly apparent in his relationship with his daughter Gianna. The two were seen at sporting events everywhere: front row at NBA games and WNBA games, on the sideline at the United States women’s national soccer team matches and behind the scenes at events such as the NBA All-Star game. Just last month, a viral video of Kobe and his daughter sitting courtside analyzing the game in front of them showed just how deep their bond was. As a father of four girls, it was easy to make jokes at Kobe’s expense for not having a son to be the “heir to his throne.” However, he didn’t seem to care. In a late night interview, when asked about who would carry on the family legacy Kobe said, “[Gianna’s] got this.”

What makes the two’s sudden death even harder to swallow was the intended destination of the ill-fated helicopter ride — Gianna’s basketball tournament at the Mamba Academy, a facility for boys and girls to hone their basketball craft, built by none other than Kobe himself. If there is any solace to be found in this tragedy, it is the fact that Kobe spent his last minutes doing what he loved — being a father.

For many people — the poor, sick, rich and down-on-their-luck — Kobe Bryant was the closest thing they ever had to a goddamn superhero.

As I began to acknowledge this other side of Kobe, one that I had ignored for so long, I began to understand why he was so revered and idolized. His “asshole” uber-competitive traits were signs of resilience and determination. His penchant for cockiness was the swagger of a man who truly earned every ounce of confidence he had. He was the guy who refused to come out of the game after an Achilles tear and scored two free throws for his team before hobbling off the court. The guy who retired from basketball and went on to win an Oscar two years later, because of course he could. A man who consistently upheld the values that many strive for, while achieving heroic feats on a nightly basis on the court. He was the reason so many children grew up yelling “Kobe!” everytime they shot a paper ball into a trash can. For many people — the poor, sick, rich and down-on-their-luck — Kobe Bryant was the closest thing they ever had to a goddamn superhero.

And that’s what makes it so difficult. This was not how it was ever supposed to end. There was no way in hell Kobe was ever going out on anything but his own terms. No fucking way. Kobe was a public pillar of strength and composure. The image of Kobe Bryant being in a helpless state in his final moments with his daughter beside him is unimaginable and crushing to everyone who revered him. It’s a disturbing image. It just wasn’t possible. If a superhero like Kobe Bryant could fall victim to the fragility of life, what chance do any of us stand?

So I get it. I get why my friends were crying all day when they heard the news. I get why NBA figures touched by this man were struggling to keep their composure. I get why the city of Los Angeles mourned publicly over a man many of them had never met. I can grasp why Kobe’s shocking death shook me so much.

So how do you memorialize a person like Kobe Bryant, an imperfect but legendary figure? I honestly don’t have the answer. From one angle, he should 100 percent face some sort of judgment and ramifications for his actions — no level of celebrity omits you from that. But on the flip side, you cannot deny the inspiration he instilled in millions of people all over the globe — not only from his playing days but from his evolution during the second half of his life as a father, an advocate for women’s basketball and a person.

When I sat on that balcony on Saturday evening looking at the dooming fog, I had no idea the emotions and moral evaluations that it would bring forth. More importantly, I never believed it would mortalize (and immortalize) Kobe Bryant.

All I know is I really wish it never happened.

I wish we could have seen Gianna grow up to be the basketball star she was destined to be.

I wish we could have seen Kobe right there on the sideline, cheering her on.