The Daily Nexus
Sports
Alum Recounts How Kobe Brought Purple & Gold Euphoria to UCSB
January 30, 2020 at 6:02 am by Jonathan Neal 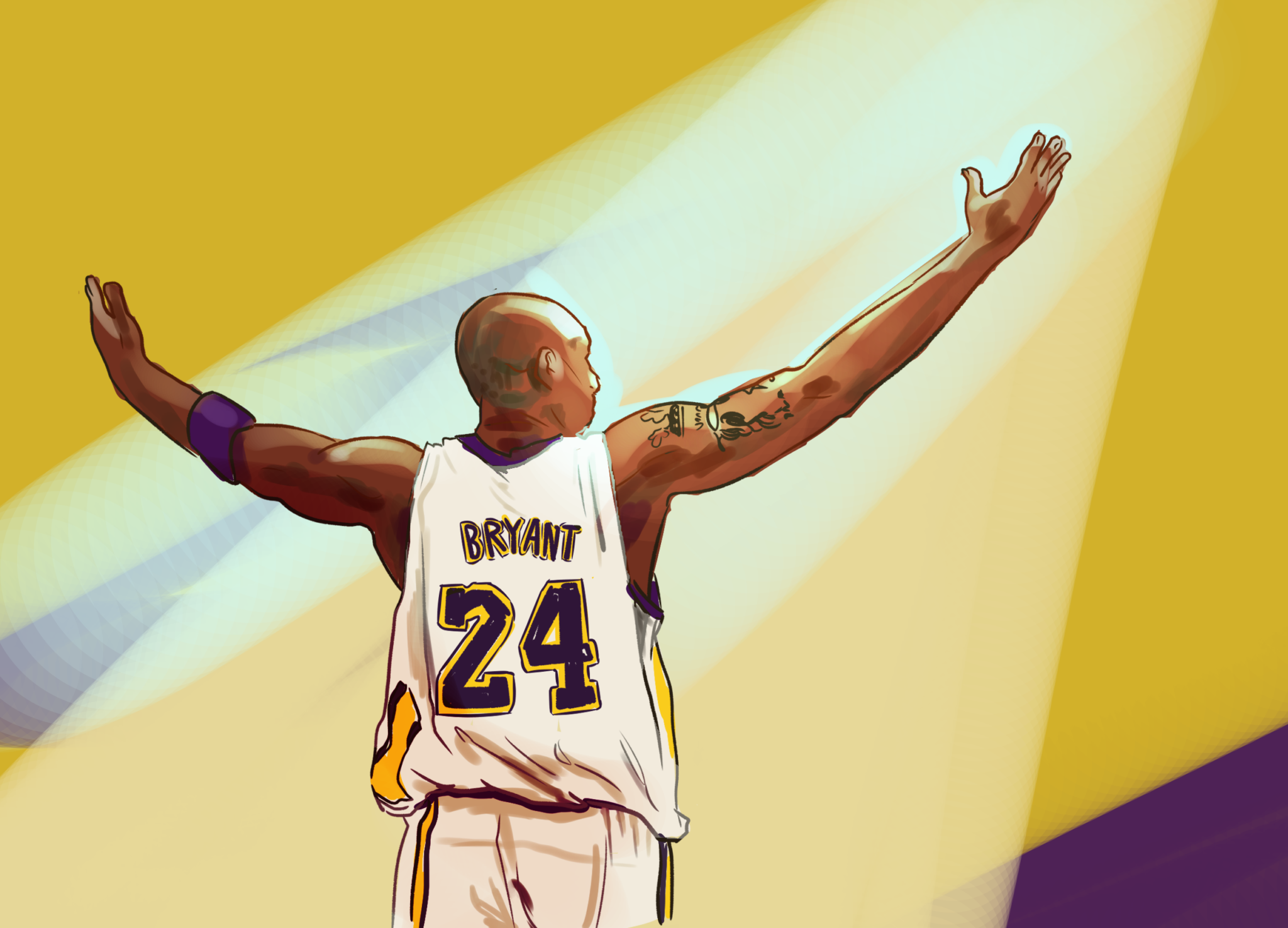 My experience as a student at UC Santa Barbara was full of sweet excitement, stunning beauty, a rigorous education, lifelong friends, ridiculous fun and a feeling that my youth would never end. Of all of my experiences as a Gaucho, some of my most thrilling were when Kobe Bryant and the Los Angeles Lakers came to UCSB in October of 1999 and deeply and visibly engaged the campus community into a magical wave of purple and gold euphoria.

It was extremely exciting when the Lakers announced that they would return to UCSB for their training camp. They had been there the prior season, but I had been too engrossed in midterms to participate (they were there in February of 1999 — a strange time for NBA training camp — due to a strike-shortened season). This time, the Lakers would be on campus from early to mid-October, right after the school year started. Perfect! No need for much studying.

The Lakers conducted their practices at Rob Gym.  Being a lifelong, die-hard Lakers fan, I was determined to connect with the players, and I had the two necessary items that would help me accomplish this. The prior summer, I had bought a gold Shaq jersey, and I had also just purchased what remains my most prized possession — a Sector 9 longboard that I still skate with in 2020.

I decided that I was going to get as many Lakers as possible to sign my jersey.

To achieve this goal, I decided to use the skateboard to my advantage. I figured out that I could place my jersey on top of the longboard and hand the entire board to the players I wanted to sign my jersey.  That way, it took up a lot of space in their field of vision and it would be harder to refuse.

One afternoon during the training camp, I stood at the exit to Rob Gym where the players would pass as they got onto their bus. The players began exiting the building.

First, Shaq signed nothing as he passed, saying with pomp: “I’m not signing anything.” It’s all good. He wasn’t the one I wanted anyway.

Lots of other players signed autographs though. I handed my skateboard to five players who signed my jersey: Robert Horry, Tyronn Lue, Derek Fisher, Glen Rice and one Kobe Bryant. For the last 21 years, I’ve been skating on my board, loving that Kobe held it.

After a few minutes, all the Lakers got on the bus — except Kobe. Kobe kept signing and signing, with a smile. Finally, the bus with the players on it started honking at him! He just ignored the honking. He kept signing away outside of Rob Gym, again, with a smile on his face. He was doing what he wanted to do — making the fans happy — regardless of his teammates’ wishes.

Once Kobe got on the bus and the Lakers departed, my jaw dropped as I realized that I had hit the mother lode — I was standing there next to Rob Gym with a bright gold Lakers jersey with the signatures of five players, including one superstar. 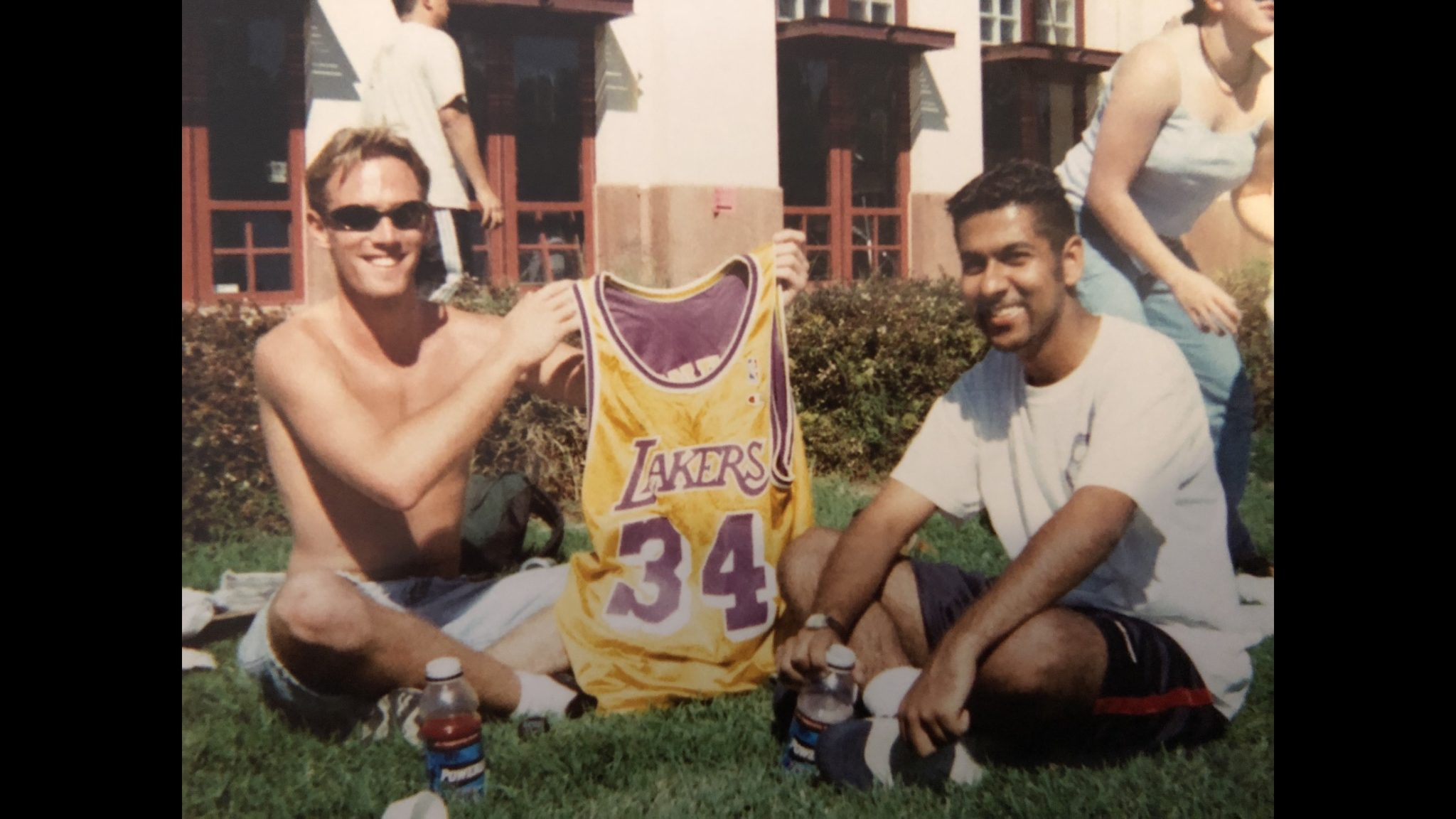 My time interacting with the Lakers was not through, however. At the end of camp, the Lakers held a free intrasquad scrimmage for the UCSB community at the Thunderdome.  In Phil Jackson’s book, “More Than a Game,” he discusses this public practice, stating “we were certainly well hosted in Santa Barbara.” Jackson also refers to UCSB as “one of the most beautiful college campuses in the country.”

Right outside the Thunderdome, the Lakers showed up in front of a handful of fans, and walked into the arena basically in a line. I asked Phil Jackson for an autograph (even calling him Mr. Jackson) but he told me that he had to start practice. Fair enough.

The last player who passed? A certain Kobe Bean Bryant.

He turned his head toward me: “Yes.”

“Can I get my picture taken with you?”

“Sure,” he said. He walked the 15 feet or so from the entrance of the building to where I was standing.

Let me point out that this was in the pre-digital camera era. I didn’t even own a camera. Before I showed up to the T-Dome, I bought a disposable camera from the Isla Vista Market, just in case I got lucky, and as Kobe approached, I gave the camera to some random dude to take it, hoping that he wouldn’t blow my chance for a souvenir for the ages.

Kobe came up to me and wrapped his arm tightly around my shoulders, like I was his little brother. The disposable camera snapped.

I was in absolute nirvana. I was flying above the ground. It was a total exhilaration. I was dizzy. Kobe had shown himself to be, without a doubt, the most accessible Laker, the kindest one and the most devoted to his fans. 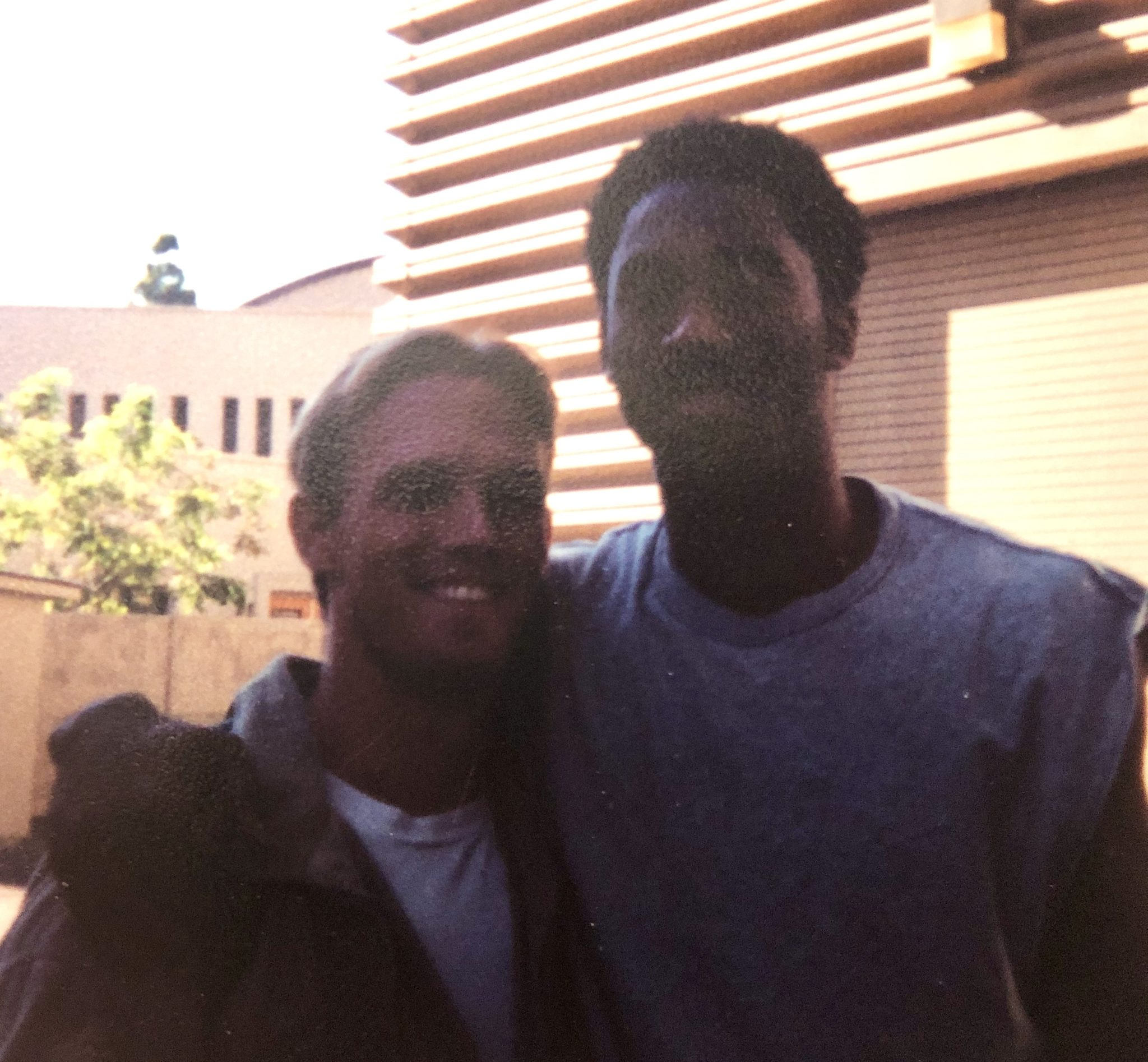 Eventually, the Lakers meandered their way into the room, unannounced. There was big applause for all of the players. Except there was one player missing — the youngest player on the team. When Kobe nonchalantly entered the arena, there was a cacophony of ear-splitting applause, a standing ovation for the ages, one that put the thunder in the Thunderdome. The deafening ovation was even bigger than the crowd had given for superstar Shaquille O’Neal.

The scrimmage itself was delicious. It was the purple team against the gold team. For pure fans, how wonderful is it to see players on one’s favorite team play one another? I wish I had more precise memories of the game, but I clearly was in the afterglow of my time with Kobe. I just remember being so happy. Feeling so lucky. To be at my beloved, beautiful university and to have the basketball team I had loved since I was 6 years old visit my campus and interact with me.

The Los Angeles Lakers won the NBA Championship that season for the first time in 12 years. They clinched it exactly two days after I walked in my graduation ceremony on June 17, 2000. So two extremely meaningful and emotional life events for me happened within a week. The Lakers also won the championship the next year … and finished off the three-peat the following season.

I want everyone reading this to remember this: The three-peat all started in Isla Vista.

I spent half of my life watching Kobe dazzle and amaze. I always thought that he would be an ambassador for the Lakers and the NBA for the next 40 or 50 years. I am deeply sad.

As I remember this story, I feel immense gratitude and love — for my magical and wonderful college experience at UCSB, for basketball, the Lakers and for Kobe Bryant. The experiences I’m recounting happened 20 years ago, but they feel like they went down yesterday.

My memories as a Gaucho are sweet and exhilarating. In the midst of my sorrow about the loss of Kobe Bryant and his daughter, Gianna, my wonderful recollections from when Kobe and the Lakers came to campus are swirling in my mind. Thank you, Kobe, for being so kind and friendly to the fans, and, for the briefest of moments, making me feel like we were 21-year-old brothers.

Jonathan Neal graduated from UCSB in 2000 with majors in Business Economics and Political Science. He lives in Los Angeles and works in the film industry.