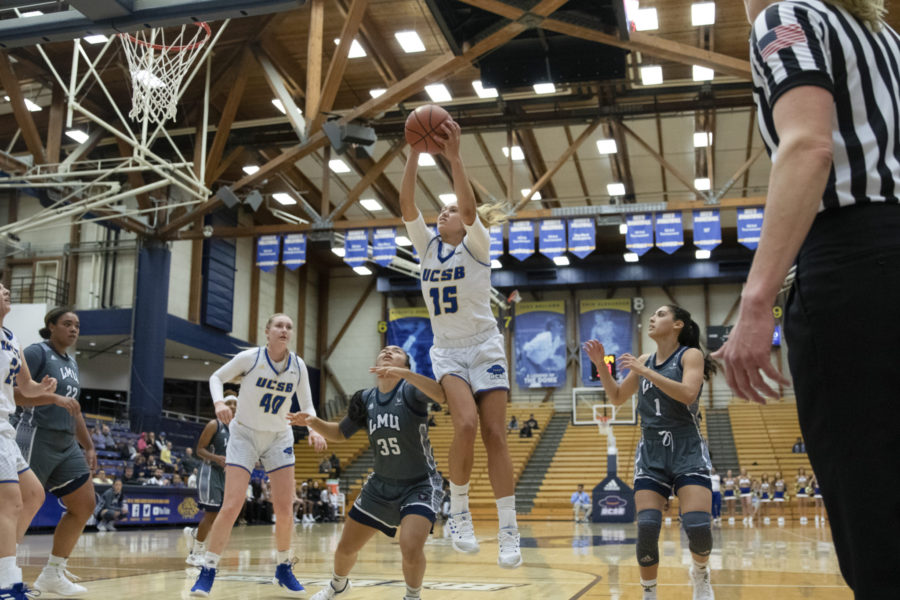 With the loss, the ‘Chos fall to seventh in the Big West with a 2-3 conference record, while the Aggies catapult to second place with their 4-1 record in conference play.

From the get-go, UCSB struggled with their shooting stroke against a tenacious zone defense from Davis. In the first quarter, Santa Barbara only shot 23.1% from the floor en-route to a 9-point quarter. With the Aggies throwing numbers at freshman Ila Lane in the post, UCSB was forced to lean on its perimeter offense, which struggled to get going for most of the night. In total, the Gauchos made only 5 of their 24 three-point attempts on the night.

“You have to be able to score, to knock down open shots,” Head Coach Bonnie Henrickson said. “I didn’t feel like we had any rhythm tonight. We got some good looks, but we couldn’t knock them down.”

While Lane was able to get going a bit in the second quarter — scoring 6 of her 12 points of the night during that quarter — Davis made a concerted effort in the second half to limit her touches in the post. Despite a gaudy 12-point, 14-rebound box score, Lane was largely stymied by UCD’s defensive approach on Thursday.

Despite the Gauchos’ cold shooting for much of the game, their defensive effort kept the game close for much of the night. Even though the team shot 28.2% from the floor in the first half, they only trailed by five at the half, 26-21.

The third quarter proved to be UCSB’s Achilles’ heel however. Davis opened the quarter on an 11-2 run — including a back-breaking 3-pointer from sophomore center Sage Stobbart, who the Gauchos opted not to guard on the perimeter. For her part, Stobbart put in one of her finest performances of the season on Thursday, finishing the game with 8 points and 10 rebounds despite the unenviable task of matching up with Lane.

UCSB did its best to chip away at Davis’ lead in the fourth quarter, but the damage had already been done. To open the quarter, senior guard Coco Miller hit 2 deep 3-pointers to bring the ‘Chos within six. Despite an uneven night from behind the arc, Miller’s range proved to be one of Santa Barbara’s only viable weapons against the Aggies’ zone defense, finishing the game with 12 total points and three 3-pointers.

Nonetheless, every time the Gauchos seemed to threaten them, senior guard Katie Toole seemed to make a key basket to keep the ‘Chos at bay. Just as she has done all season, Toole quietly impressed on Thursday, using her smooth mid-range jumper and shiftiness in the paint to lead UC Davis with 18 points on 8-14 shooting — including a team-high 5 points in the fourth quarter.

In addition, Davis dominated Santa Barbara on the glass, outrebounding them 46-38. On a night where neither team shot the ball particularly well, that proved to be the difference.

“We defended the 3-point line well, but we gave up 18 offensive rebounds,” Henrickson said. “ It was the second-effort play and the second-chance points that killed us.”