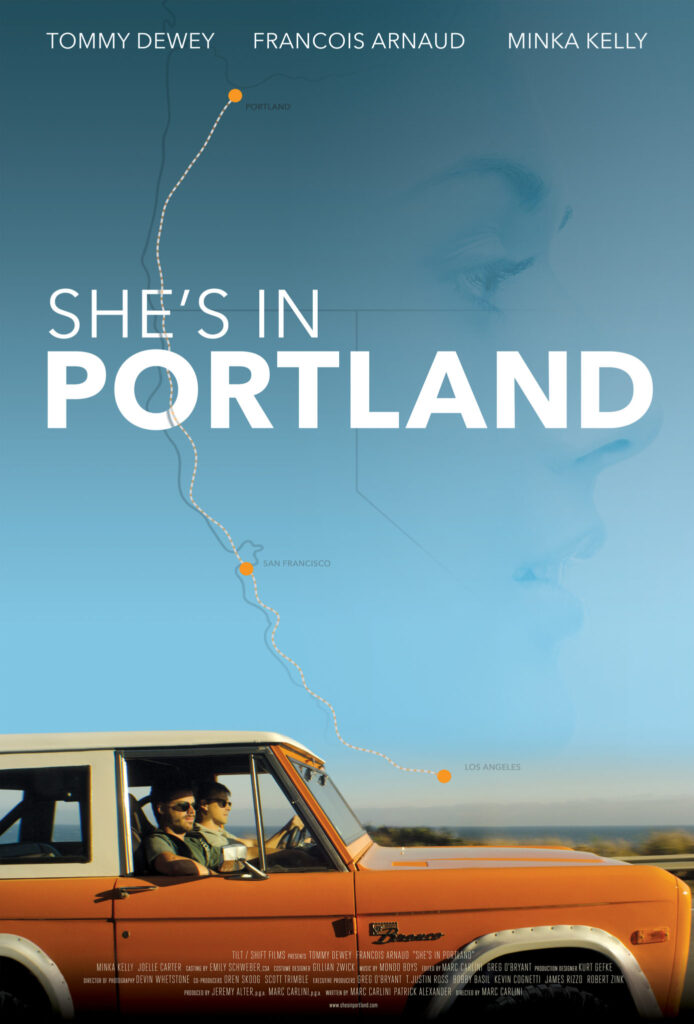 As an avid appreciator of independent films, I was intrigued when I received an email from co-producer Oren Skoog about the film “She’s in Portland,” which was having its West Coast premiere at the Santa Barbara International Film Festival. The film previously premiered at both the Boston Film Festival and the Alexandria Film Festival. The plot description was interesting on its own: Two friends, Luke and Wes, decide to travel up the West Coast to find Luke’s “one who got away.” Scenes shot in Isla Vista were featured in the film, with the crew hoping to capture some of “the magic of a DP Saturday night.” Writer and director Marc Carlini and Skoog discussed these aspects of the film.

While it was initially hard to ask questions about a movie that I hadn’t seen prior to the interview, Carlini’s passion for his project was immediately apparent in discussing his motivation behind the story of the film: conveying that “stuck” feeling we all have at some point in our lives, confused about how to make a change in our lives for the durability of our future. The film stars Tommy Dewey (Wes) and François Arnaud (Luke), known respectively for their roles in “The Mindy Project” and “Blindspot.” Each main character faces his own perils, with Wes stuck in a demanding corporate career and Luke a starving artist. Wes drags Luke on a California coastal road trip to Portland to find Maggie (Nicole LaLiberte), Luke’s former almost-flame in college. Not surprisingly, the inspiration for this plot piece stemmed from Carlini’s own experience with a girl who lived in Portland.

Carlini was adamant that the storyline of the film could appeal to UC Santa Barbara students in particular, not only because of the unique nostalgia of a weekend night in I.V. but also because of the atmosphere of the film — reminiscent of the “what now?” attitude that pervades us as college students as we navigate building a life after college that we’re passionate about. After watching the film, I echo his sentiment. Although the characters are in their mid30s, there is an essential message in the film that can appeal to college students in general about how growing up can be a time that is marked by the constant inner questioning of our own life choices.

Skoog’s experience as a student at UCSB and as a resident of Isla Vista inspired Carlini’s decision to include Isla Vista in the film, a location that is difficult to replicate in a Hollywood studio. Isla Vista is the first stop for the main characters in the film, and the cinematography alone was enough to leave me satisfied with the portrayal of our beloved college town as the film showcased shots of I.V. businesses, the beach (of course) and students skateboarding and biking the streets without a care in the world. The decision to include I.V. in the film was not one taken lightly, as Carlini did not want to delineate or perpetuate the stereotype of I.V. as just a “party town,” but as a town that contributed significance to the film. Carlini recounted his bewilderment at his first encounter with I.V. and how it evoked a dreamy vibe unlike typical college campuses. For filming, the crew had a group of students voluntarily throw a party at a house in I.V. that could’ve rightfully blended into a typical night on DP. The main characters, Wes and Luke, quickly befriend two girls from UCSB who tag along on their road trip to their next stop — Big Sur. Perhaps the most telling significance of including I.V. in the film was the wistful feeling that young adulthood, especially at UCSB, is an unparalleled experience and a stage of life that passes by fleetingly and without warning.

Other notable locations featured in the film include Big Sur, San Francisco, Monterey and Crescent City. While the connection between the two main actors is undeniably authentic, the Pacific Coast Highway almost acts as a character within the story too, each stop on the California coast signifying a break in the emotional journey of the two characters. The detailed cinematography in the film takes an otherwise typical road trip and adds a magical essence. At the close of the film, the significance of location again arises as Luke has to make a crucial decision with regard to his route that could potentially change his life forever.

You can catch the screenings of “She’s in Portland” on Jan. 16 at 5:20 p.m. in Metro 2 Theater downtown or on Jan. 20 at 4:20 p.m. in Fiesta 4 Theater during the Santa Barbara International Film Festival.