The Daily Nexus
Sports
UCSB Men’s Basketball Trying To Rebound Against Hawai’i
January 16, 2020 at 5:05 am by Nick DiPierro 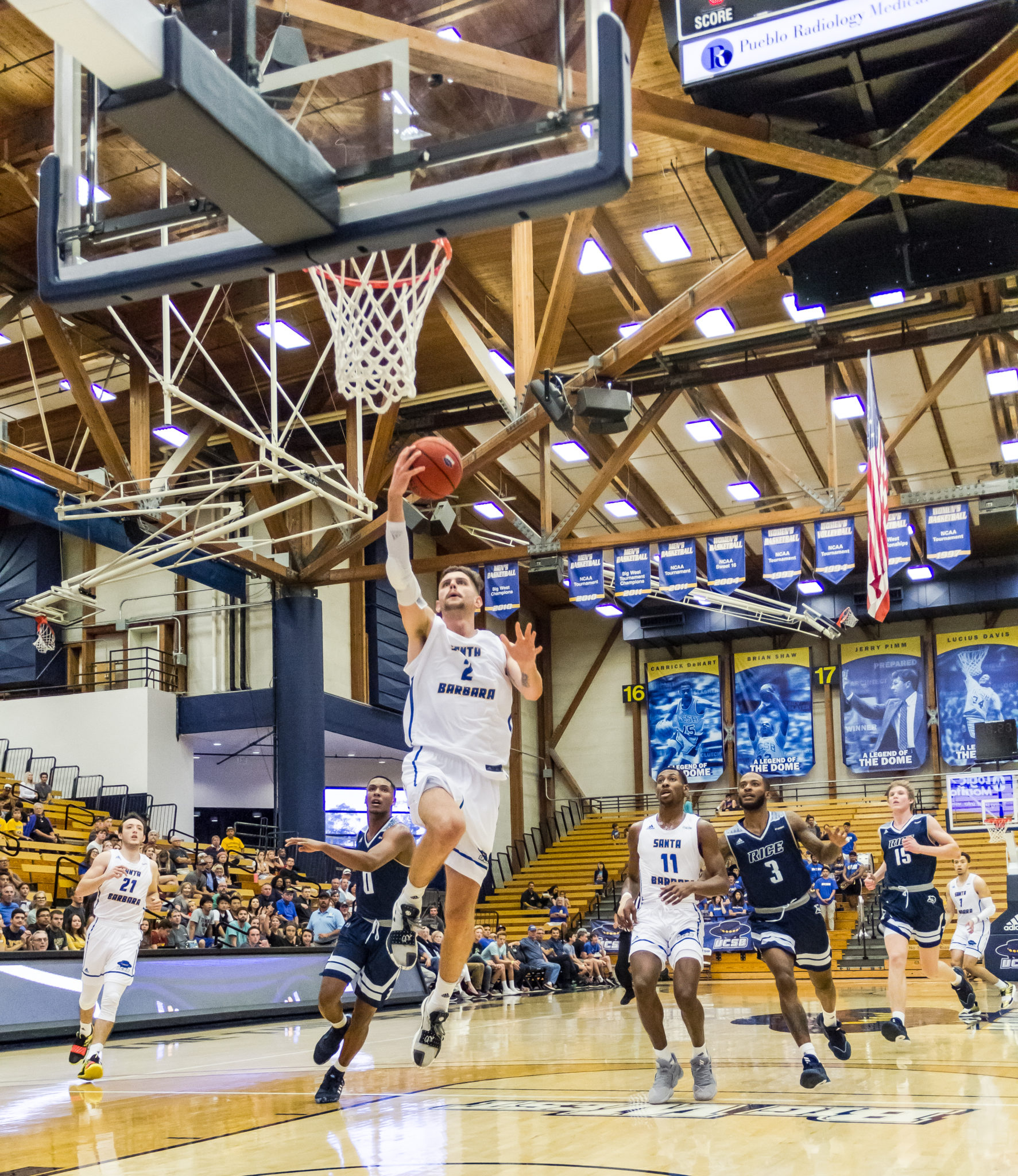 The UC Santa Barbara men’s basketball team will hit the skies for a conference showdown at the Stan Sheriff Center in Honolulu. There, they’ll take on fourth-place Hawai’i in what should be a highlight reel match between two of the best the Big West has to offer.

UC Santa Barbara (UCSB) will come into the match winners in 11 of their last 13 games including a sensational victory in this year’s first rendition of the Blue-Green rivalry.

That game was also UCSB’s opening match in conference play, where they now have a record of 1-1 after last Saturday’s nail-biter of a loss to Long Beach State at the Thunderdome.

Gaucho junior guard Devearl Ramsey opened his account early with a dominant defensive showing in the opener against Cal Poly. Ramsey collected 8 defensive rebounds, dished out 2 helpers, had 4 steals and then decided to add 6 points off of a 3-6 showing on the floor.

He followed that up with a 10/3/5 line, 3-steal performance against Long Beach State. Expect him to play a big role in this weekend’s match.

UCSB’s junior guard JaQuori McLaughlin put up 15 points in each of these past two games. He’s got sophomore forward Amadou Sow in tandem who scored 13 and 15 in each of the two, respectively.

Despite the solid performances from around the court, the Gauchos opened the season 1-1 because they did and didn’t do the basics.

They followed up a 51% shooting percentage from the floor against the Mustangs with a 32% showing against Long Beach State. Had Sow not shot 6-9, UCSB would have finished the night at 24%.

Regardless, no team could expect to find themselves at the top of the conference with a 32% efficiency from the floor by season’s end. Expect the Gauchos to have a much better night with the ball in their hands come this weekend.

Every team in the conference has played two games, save for two: UC Irvine and UC Davis. The Anteaters took down Hawai’i in their opener while the Aggies saw different results against UC Riverside.

So while UCSB seemingly broke down during their loss, Hawai’i lost to last year’s champs — champs who swept their season series against the Gauchos.

Even if it’s a small sample size, 2-0 is still better than 1-1 and Hawai’i might be looking more like a 2-0. The Gauchos will lose if they underestimate the Rainbow Wahine.

Prior to the loss, Hawai’i took down Cal State Fullerton 75-69 in their season opener.

Senior guard Eddie Stansberry was a scoring machine, dangling and dazzling his way to 25 points and a 10-15 record from the floor.

Both teams finished just about equal in field goal percentage and free throws made while Hawai’i made 20% more of their 3-point attempts. A couple more threes and you get the 6-point win the Rainbow Wahine did.

That same fiery sniper was more of a disengaged grunt, shooting a measly 3-13 against Irvine. Even though he did knock down three threes with a 3-9 performance, you can’t win games with that kind of display. Stansberry, at 6’3” and 190 lbs, is still just a senior and you can expect a lot of ups and downs from him as the season continues.

Don’t be shocked if he has another up night when the Gauchos get into town.

UCSB will make the transpacific trip to the Stan Sheriff Center this Saturday where they will take on Hawai’i. Game tips off at 10 p.m. PST.