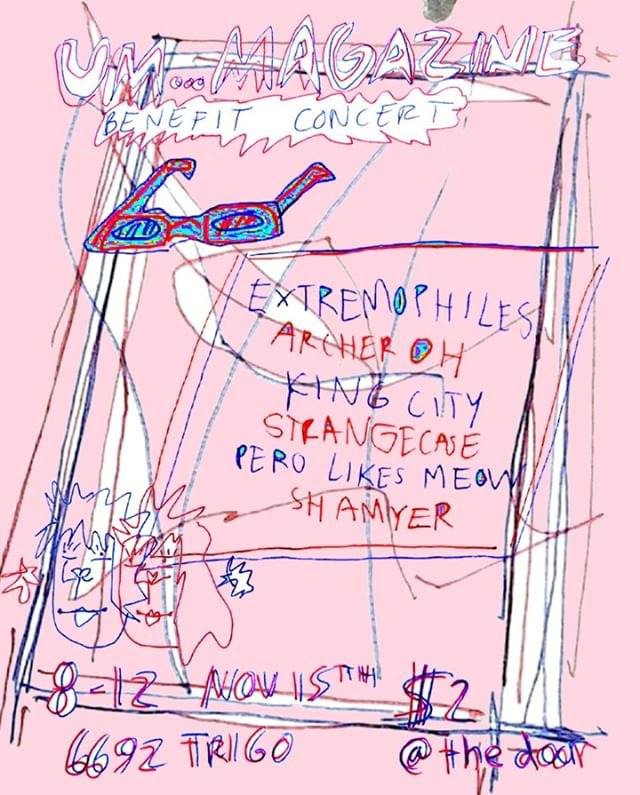 Another Friday night, another garage packed and ready to party in Isla Vista — this time for Um…Magazine’s Benefit Concert. Um…Magazine was able to do what it does best and bring talents from various backgrounds together for a good ol’ fashioned indie rock mosh. However, the night was defined less by the music and more by the compassionate culture exemplified by fans and bands alike. “The people here seemed really loyal to the music itself, not just one particular artist,” said Arturo Medrano of the Moreno Valley-based band Archer Oh.

Um…Magazine is a publication at UC Santa Barbara that prides itself on giving a voice to those that have historically gone unheard. Not limited to solely music, the magazine shares a wide spectrum of art from a variety of marginalized creators. Their self-appointed responsibility to represent the unique was respected with no two acts looking or sounding the same. However, this show was particularly special, with Extremophiles inviting industry friend Archer Oh to come over and pay Isla Vista a visit.

Shamyer opened the show with dreamy chords, expressing some bedroom pop influences to start the night off on a sweet note. Pero Likes Meow was up after, with their infectious energy delivered in Spanish, even performing Latin classics like Maná’s “Oye Mi Amor.” When it was time for the next two acts, Strange Case and King City, the crowd was tired of standing and swaying and the room quickly became a bustling bunch of kids bashing into each other. With every kid there open to any good sounds that were offered, the show remained at its peak through Archer Oh and Extremophiles’ sets, both of which gave the kids the garage-surf style experience that is only spread here in the southern coast.

The bands had wrapped up, and the crowd made their way into I.V. shortly after midnight with plenty of night left, but the magic could still be found on the set as Extremophiles and Archer Oh got a chance to catch up with the show having concluded. The two groups had met at a previous show in the Inland Empire, both bands having originated from that area.

“It’s like a farmer’s market for parties here,” Medrano, the lead singer of Archer Oh, pointed out, laughing at the way residents seemed to feel out the energy of the functions before dedicating to one. “Yeah, you know, this is the one. I like the vibes here,” he mocked. He then elaborated that, although finding it funny, that was his favorite part about Isla Vista.

“If you’re saying something, people will give you a chance and listen here,” he said. “I personally felt super welcomed, which isn’t always the case, some crowds act all weird, but these kids were super receptive.”

Extremophiles were quick to clarify that although the audience members are quick to come in and party, most of them are not as quick to leave. “They’re really dedicated too. A lot of them are really trying to help you,” said Charlie Kernkamp, drummer for Extremophiles. “We had a show shut down by the cops and we were just like ‘fuck it we’re moving all the way across I.V.’ Everyone just grabbed our stuff and nothing got stolen. It’s a music community out here man.” The other I.V. residents agreed with Kernkamp. Around here the main goal is to help one another be heard.

The two bands said farewell at the end of the night, both having shows to prepare for the next day. But both were excited to work together in the future, with Archer Oh affirming their hosts of their great time and eagerness to return to an I.V. stage very soon.  Um…Magazine is a publication about loving each other, so it only made sense that a defining moment of I.V.’s love for sharing good times and good art was found at their function.