A longstanding, controversial plan to build affordable faculty housing on Ocean Road — effectively demolishing the separation between the university and Isla Vista — was formally presented at last week’s UC Board of Regents meeting, one of the first public moves for the project since it was revived last year. 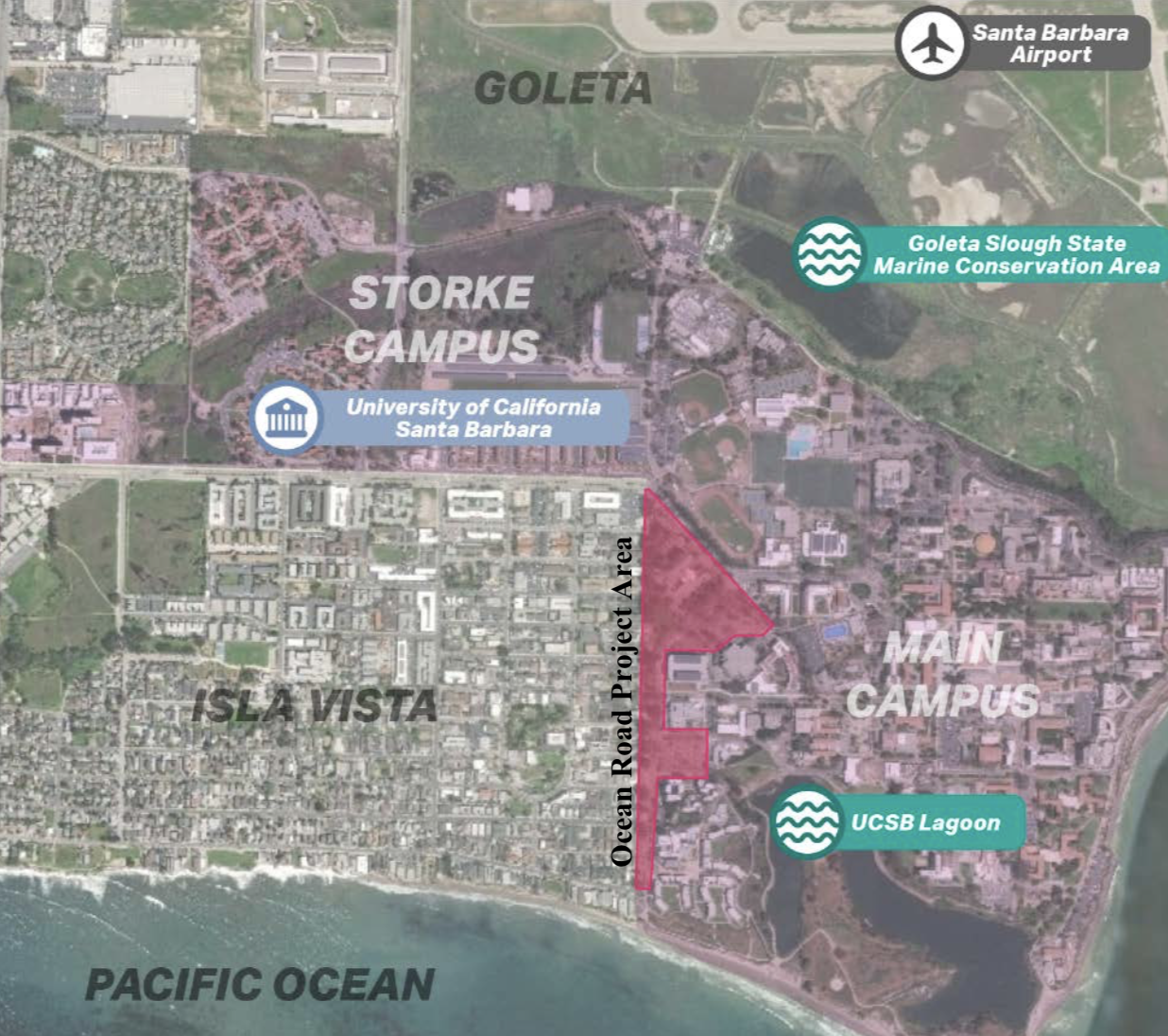 The proposal would demolish Ocean Road and cover the 16.7 acres of land up and down the street with up to 540 housing units — 180 two- and three-bedroom townhomes for sale and 360 rental units.

“There is an unmet and sustained need for faculty and staff housing at UCSB, which has been exacerbated by Santa Barbara’s constrained and high-cost housing market,” the proposal wrote.

“The need for attainable, high-quality housing options remains a critical issue for recruitment and retention of faculty and staff at UCSB.”

While the proposal doesn’t specify the proposed costs of these units — only highlighting that they would be set at a “reasonable, market-based average sale price” —  it does note that according to a third-party site, home prices in Santa Barbara and Goleta over the last 30 days averaged $1.2 million, and that the average rent for the past five years was approximately $2,249, with a 98% occupancy rate.

The proposal noted that of the current faculty and staff housing options provided by UCSB, both Ocean Walk, made up of for-sale properties, and Sierra Madre Apartments, made up of rental properties, are at 100% capacity. The wait list for Ocean Walk housing is at 185 people, and the Sierra Madre waitlist had been capped at 200.

“In addition to providing clear indications of interest and demand, survey responses also confirmed long commute times (over 45 minutes) and distances (over 25 miles) for a significant number of faculty and staff, further highlighting the need for housing options close to campus,” the proposal wrote.

One of the key differences of this project, compared to typical UCSB housing projects, is that it will include “30,000 to 55,000 gross square feet of retail space.” The university hopes to help alleviate the costs of the townhouses and apartments through a subsidy program, which will be funded, in part, by the “ground rent” generated by the project.

“The rental and retail portions of the Project are expected to be developed, owned, and managed under a long-term ground lease,” the proposal stated.

In addition to the housing and retail space, the proposal said that the project would include “realignment of the existing Ocean Road roadway and physical improvements for connections to Isla Vista, new and replacement parking for the community, and open space, vehicular, bicycle, and pedestrian pathways.” 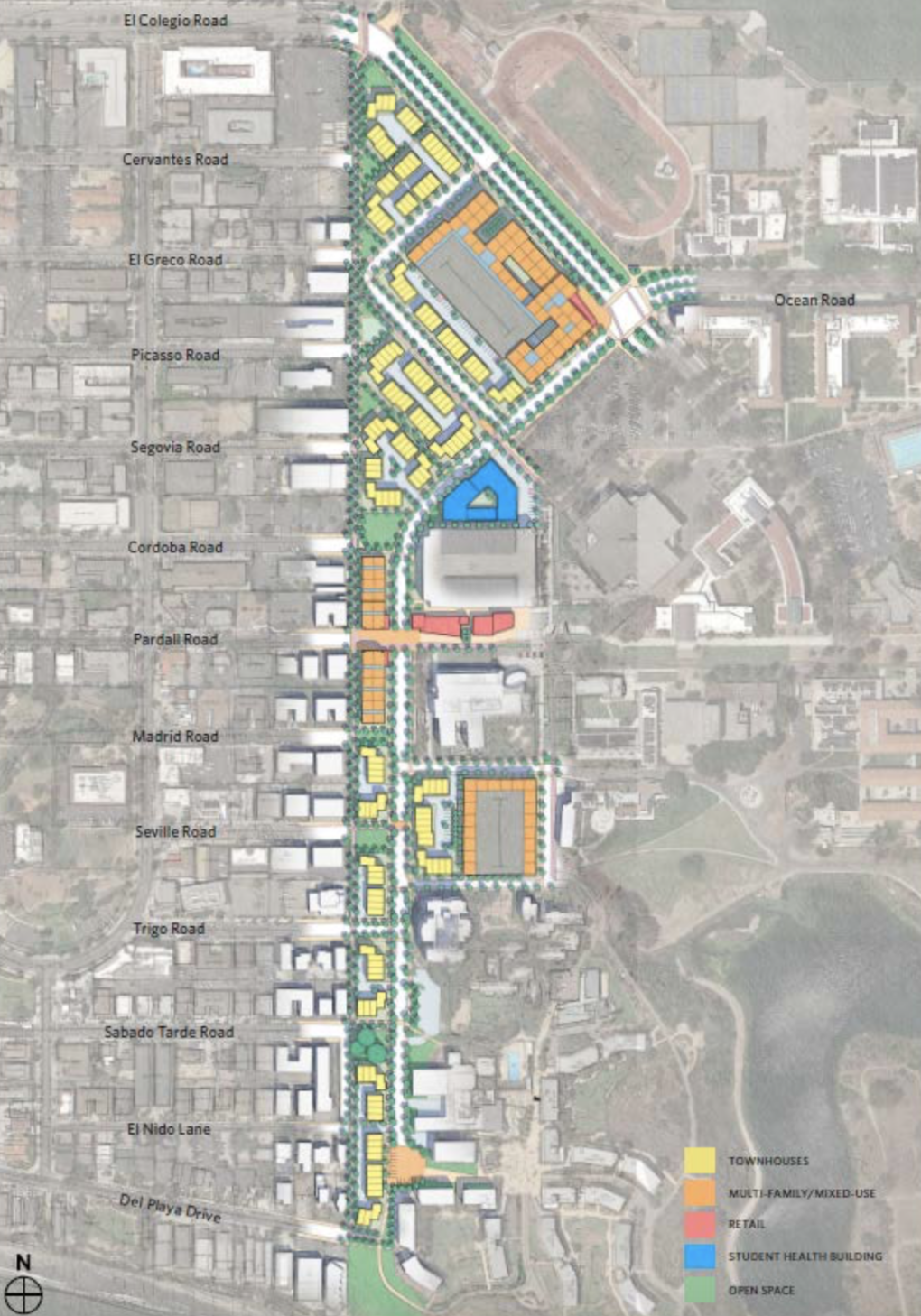 A 2018 article by The Current, a publication run by UC Santa Barbara’s public affairs office, boasted that the project would create a “dynamic residential community” and “redefine the border between Isla Vista” — but that is exactly the problem that Isla Vistans had with a former version of the project.

Nearly 15 years ago, in 2005, campus planners approved a similar Ocean Road housing plan, which would involve 536 units divided into apartments, lofts and townhouses.

It was reported at the time that construction was scheduled to begin in 2007, but in 2009, the university postponed its attempt to demolish Ocean Road amidst severe public pressure to halt the project, the Nexus reported in 2009.

A Nexus op-ed regarding the university’s previous attempt denounced the 2009 program, noting that the project would involve tearing down the famous eucalyptus trees that line Ocean Road; similarly, in recent months, a few citizens have shown up to Isla Vista Community Services District meetings expressing similar concerns about the trees.

If the current plan is approved, Student Health would also need to be relocated from its current location.

The 2018 Current piece also said that “input from people both on and off campus will again be crucial, and multiple opportunities for such public discussions will be provided and welcomed every step of the way” — but no such publicization of the project has been prevalent until the Regents meeting last week.

“Outreach and community engagement were central to the original Ocean Road proposal and project approval, and they will remain important considerations throughout the project planning stage and beyond,” UCSB spokesperson Shelly Leachman said in an email about the project in June 2019.

Leachman added that the Office of UCSB Community Housing Authority on campus had administered a survey to students, staff and faculty earlier in the year regarding the Ocean Road Housing project, and that the office planned to conduct additional surveys as the project planning continued.

“In accordance with the California Environmental Quality Act, the university will prepare an addendum to the 2010 LRDP Environmental Impact Report. That addendum, along with designs, will be considered for approval by the UC Regents in a public meeting in January 2020.”

The proposal presented to the Regents updated that timeline, confirming that the UC Regents would be presented with the business terms for the project in the first financial quarter of 2020, and the design plans and “an environmental document pursuant to the California Environmental Quality Act” in the second or third quarter of 2020.

UCSB is “is currently in the final stages of a robust solicitation process” to select the developer for the project, according to the proposal, after which it will be able to “finalize the key business terms for the Project and to implement predevelopment agreements to finalize design, planning, entitlements, and Project approvals.”

UCSB’s investment in forming the Community Services District is primed to pay off. That herd of sycophants will line up and extol the virtues of high density housing in the coastal zone. UCSB will plant a forest of tax free housing that sucks the life out of IV and places yet another tumor on the side of Santa Barbara County. One word comes to mind–mitigation–you want to build a town in a town sustained by built in new businesses?–you need to pay taxes like the rest of us–through the nose.

They are building on almost all of the parking lots over there–where will people park?

The same places they always have parked — at home (former member of the UCSB parking committee).

This is stupid. Like seriously, here’s a bright idea UC why don’t you quit being greedy landlords (because YES if you didn’t know the UC owns ALL the major leasing companies in IV and all throughout California, primarily around other UCs. SO they control market prices for housing). Pay your workers living wages, quit outsourcing!! If people were given a living wage to begin with at this so called ‘world-class’ university, we wouldn’t have faculty or staff with hour commutes from oxnard or lompoc.

The housing is an attempt to attract faculty. They make living wages (mean = @ 130,000/yr). They will not come due to housing costs (compare to housing at UA, e.g.).

Your points may be valid but they are not relevant to the concerns driving this issue. Try to stay focused.

They’re gonna take 2 thousand cars off the highway and put them on Ocean Road, along with families, kids, dogs mini-marts, and maybe a “nite spot”. This is a MASSIVE CITY, an “urban street”, a gridlock traffic and parking tsunami at the heart of the I.V./UCSB community. The Eucalyptus curtain is public open space, environmentally sensitive habitat for migratory birds, as well as monarch butterflies. It will be handed over to developers for their exploitation and profit. That monument to free speech, the Pardall Tunnel, will be replaced by a monumental traffic jam. The Univerisity is a California State Agency… Read more »