The Daily Nexus
Science & Tech
Mental Health in Medicine: Presented by Vania Manipod, D.O., at UCSB
November 21, 2019 at 9:30 am by Sean Crommelin and Jacqueline Wen 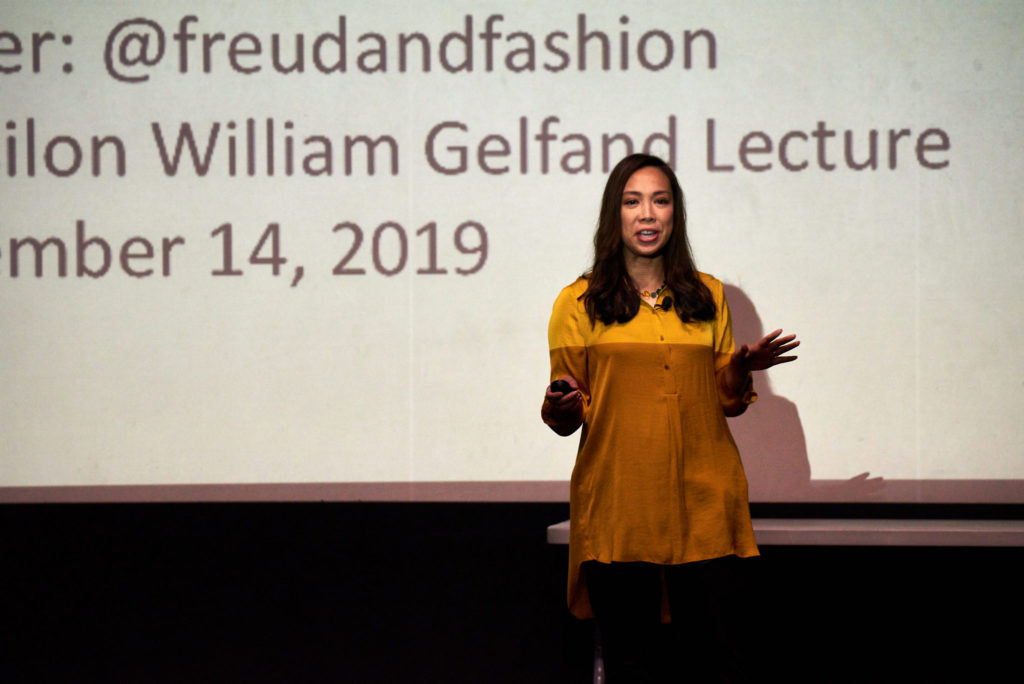 Manipod, D.O., described her own experience with occupational burnout and how living with the condition led to her reevaluate her career and her priorities as a psychiatrist.

After years and years of schooling, Manipod entered the psychiatric profession, eager to connect with her patients and make an impact. She spent numerous sleepless nights cooped up studying. But her struggles in moving up through undergrad to reach medical school and residency — all of it finally paid off and netted her the job of her dreams.

So as an attending physician, why was she so exhausted and unhappy?

“I hated seeing patients; why would I hate seeing patients, like this is what I went to school for! I hated waking up in the morning. All of a sudden I was like, ‘Why do I not want to go to work?’” Manipod said.

Manipod searched for answers online, hoping to bridge a gap in her knowledge and make a recovery plan but found a dearth of information. It was only until she discussed her symptoms with a therapist that a clearer picture began to emerge.

“At that point, I thought, you know what, nobody’s talking about this. This was 2014,” Manipod said.

Although she was fearful of how the medical community would react, Manipod resolved to fill the void. She wrote a blog about her experiences with burnout as a psychiatrist.

“I said, ‘Screw it, maybe other people are feeling this way.’ It got posted on KevinMD, under the title ‘A psychiatrist is burnt out and depressed. Here’s what she did about it,’” Manipod described.

“When it first came out, I was mortified,” she continued. “I thought to myself, ‘Great, now everyone’s going to think I’m a failure,’ but instead … I got messages from doctors all over the world telling me, ‘Thank you so much for writing about your experience. I feel the same way, and I feel like I’m not alone.’”

Burnout is a state of exhaustion stemming from prolonged and excessive stress. According to Manipod, what makes burnout so pernicious is its tendency to linger and relapse quickly when the one afflicted is reintroduced to the source of their stress — even after they have taken time to relax and recover.

A single source of stress is difficult to pinpoint. According to Manipod, often “it’s actually everything that has accumulated throughout our training that builds up to the point that we experience symptoms.” In other words, it’s the sum total of a person’s lost sleep, backlogged work medical notes and all of their other obligations which coalesce and coalesce into an inescapable feeling of fatigue and burden.

Someone with burnout begins to doubt the significance of their work, and they lose the sense of personal accomplishment which would normally provide momentum and motivation during times of stress.

“We start to view our work negatively, without value and [as] meaningless. This doesn’t make sense. I mean, all of you are striving to become a physician or whatever your career goals are; you’re high-achieving. But despite this, we start to view all of those things as negative,” Manipod said.

Practitioners afflicted find themselves unable to connect with their patients. They may find themselves resenting the people they’re meant to care for and develop a negative attitude toward seeing patients, according to Manipod.

“I’m a psychiatrist and I love my patients, but when I was burned out, I was really hoping that none of my patients would show up, And then when a patient showed up, I was like, ‘Ugh, I have to see a patient,’ and that’s when I knew that something was wrong.”

Manipod described the perfectionist mentality that many in the medical community have — something admirable and to a point, necessary, in such professions, but also something which leads to incredible stress. She pinpointed it as a reason for their tendency to blame themselves for their mental health issues.

“I think what happens when we experience this is that us as pre-med, pre-health people, we internalize it, we think, ‘What’s wrong with us?’ We experience symptoms and we assume it’s weakness.”

However, she also stressed the systemic issues which contribute to burnout and brought to the audience’s attention the general resiliency of prospective medical school students.

Manipod cited a nine-year study from 2007 which assessed the personalities of incoming medical students, compared them to the U.S. general population and found the students to be livelier, more adaptive and more emotionally stable than the general population.

“These are all factors that contribute to resiliency. I don’t want people to assume that people who go into medicine are just prone to burnout because of who they are as people and their personalities. This is something that occurs over the course of our learning and our training. We start off being very resilient compared to the U.S. population,” Manipod noted.

That said, the medical track takes its toll on even the most resilient, and high incidences of burnout are indicative of this. According to Manipod, systems and institutions in their current form are not adequately resolving this.

“This is a system-wide issue. So many people are experiencing this, it’s something that the systems need to be able to address as well. Burnout is not solely your problem. There are ways that we can learn to deal with our own individual stress, but it is a systemwide problem that educators and our health care system needs to address.” 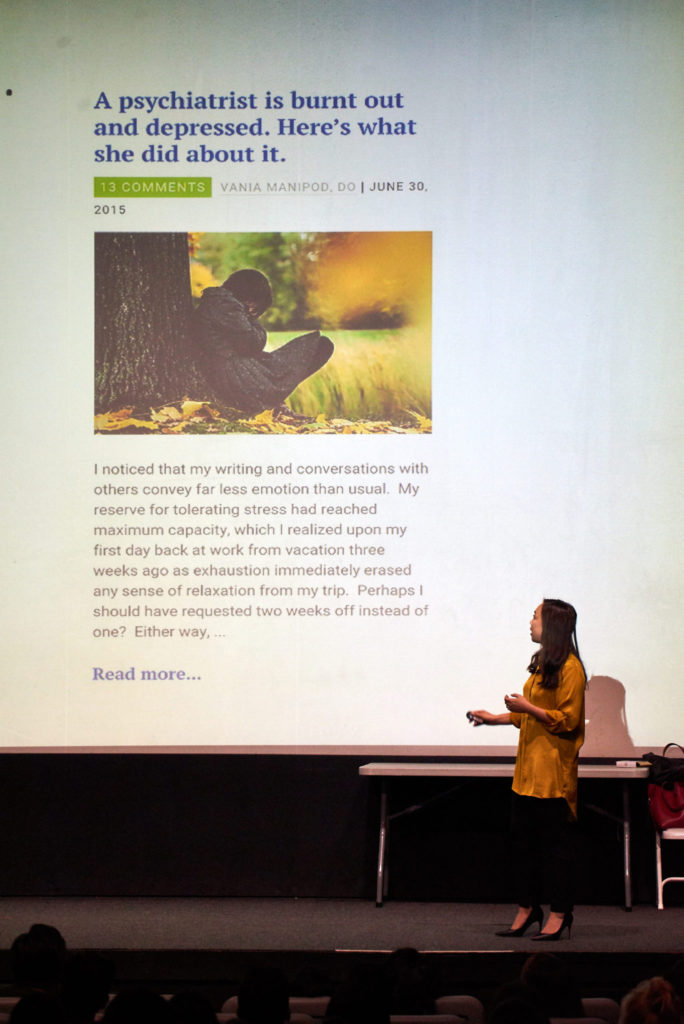 A significant takeaway for many audience members was that they weren’t the only ones having these feelings or thoughts relating to burnout, which was “reassuring” for third-year biopsychology major Krystle Ortega.

One common concern among pre-med students in the audience was hesitation over taking time for themselves — to practice self-care.

“I know before this talk I felt very guilty about taking a gap year before entering into medical school. But now I feel more comfortable about being able to take a gap year, that needed break from after doing four years at UCSB,” Angela Calaguas, a fourth-year biopsychology major, said.

In addition to dealing with academic pressure, many pre-med students face familial pressure that may intensify their sense of burnout or mental health issues that they are experiencing.

Calaguas said, “It stems from being the first one in my family to pursue something higher than a bachelor’s degree … I’m going to be the first person in my family who’s going to be pursuing [medical school]. So that puts on a lot of familial pressure on me as a student.”

Planning to pursue psychiatry, Ortega reported feeling pressure “because what I’m doing is not something that is widely recognized, especially in just Asian cultures, in general or just even in the world … At least in collectivist cultures, [talking about mental health concerns] is widely looked down upon. In my family, it seems like you’re either lazy or like you’re faking, but it’s more than that. [Mental health] is something I want to advocate.”

Manipod’s presentation personally resonated with Calaguas and Ortega for these reasons.

“I think the reason why we both really wanted to go to this event was because it’s representation for us because we don’t get as much representation of diverse people like her —  especially a Filipino —  [and] a woman in psychiatry, in the medical field. Especially someone who isn’t afraid to pursue this subject matter,” Ortega said.

Nicole Glick, the vice president of programming at Phi Delta Epsilon, organized the event as part of the fraternity’s annual public Gelfand Lecture. Following their first lecture last year featuring a male physician with the San Francisco 49ers, Glick wanted to “mix it up” and “bring a woman to the table” to include “more women representation in medicine on campus.”

Glick, a third-year biopsychology major, found Manipod through Instagram and thought she would be “a perfect speaker” since Manipod was based nearby in Ventura and “mental health isn’t talked about too much in the pre-health community here at UCSB.”

Glick stated that she didn’t perceive many mental health resources to be easily available or accessible on campus, and that she has to “dive deep” if she wanted to find more information. Through hosting this event, she found it to be “an easy way for people to come and gain some knowledge about how to maintain their mental health and avoid burnout, as opposed to diving deep into the pre-health advising pages about what kind of events, if any, are available to students.”

One insight Glick took from the talk was to more seriously consider her mental health further along in her medical track.

“Sometimes we don’t think ahead about how as pre-med students, if we continue these bad habits of not caring about our mental health, it can continue and then affect our [future medical] practice,” she remarked.

After all, there is a danger to working endlessly.

Manipod described an impactful moment that stayed with her. “I gave this talk one time in New York. And that was around the time that I think two medical students in New York had died from suicide. I kept thinking, ‘What if they felt less shame to take time off? Would they still be here?’ I don’t know. But maybe.”