At the University of California Regents’ Nov. 13 board meeting, UC Santa Cruz graduate student Rebecca Ora publicly accused Regent George Kieffer of sexually harassing her in 2014, calling for a change in the way the Regents handle misconduct cases against themselves. 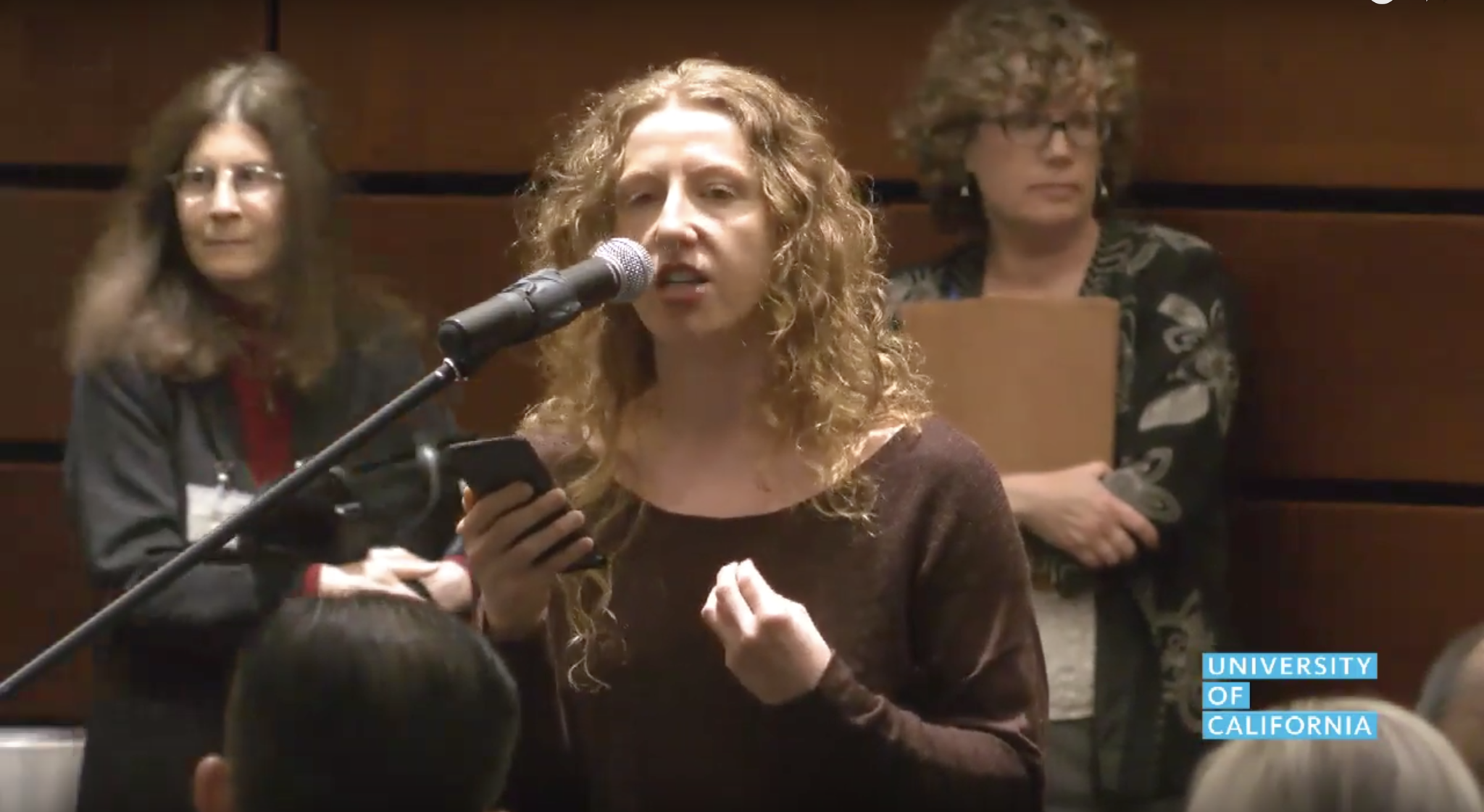 Ora spoke at the Nov. 13 Regents meeting, accusing Kieffer of sexual misconduct against her in 2014. Courtesy of UC Regents Video.

During the board meeting’s public forum, Ora, the external vice president of the UC Santa Cruz Graduate Student Association, accused Kieffer of grabbing her thigh numerous times throughout a dinner between Kieffer and various undergraduate and graduate students, held prior to the Regents’ board meeting in July 2014.

“Kieffer purchased wine for the table despite the undergraduate students present. I do not drink and did not drink that night, but Kieffer did,” Ora said during public forum.

“At one point in the conversation, I was shocked to feel pressure on my upper thigh and looked down incredulous to find Kieffer’s hand firmly grasping my leg. This persisted throughout the evening. I was unsettled, uncomfortable and felt powerless to stop this figure of authority from putting his hands on my body.”

Kieffer, a UC Santa Barbara alumnus, has served on the Board of Regents since 2009, and his term is set to end in 2021.

UC spokesperson Claire Doan said in an email that due to student privacy laws, she could not comment on specific allegations raised at the board meeting but said the University of California “takes these allegations — as we do any allegations — seriously.”

Ora’s testimony also shines a light on the difference between the University of California and the UC Regents when it comes to handling sexual misconduct allegations — all decisions regarding Regent misconduct are handled by the Regents themselves, according to Regents Policy 1112 .

Ora told the Nexus that she has experienced instances of sexual misconduct before but said the power differential between herself and Kieffer limited her voice in the reporting process.

“I was in a train station and somebody put his hand on my behind and squeezed, and I turned around and punched him in the stomach. That is who I am. But when you’re sitting next to somebody who’s talking about being best friends with [former California Governor] Jerry Brown, and you’re in a public space, you can’t punch him in the stomach,” Ora said.

“The difference in power among people determines the type of response they’re capable of having in that moment. And I know it’s opening up a huge amount of complexity, but when a power differential was so steep that you literally cannot stand up for yourself, that makes whatever is occurring so much worse.”

Ora said that she is the first person to go through the Regents misconduct investigation process, described in Regents Policy 1112, which outlines the specific policy for allegations of misconduct against a Regent.

“Apparently the UC Regents have a policy all their own, written by the Regents, which states that all complaints against a Regent will be handled by the Regents … with a clear focus on ensuring the utmost delicacy toward the powerful Regent reported, rather than the individual reporting,” Ora said during public forum.

“In the words of a Title IX employee, ‘In the Regents policy, I, the complainant, do not even exist.’”

In response to Ora’s allegations, UC Student Association, the UC Graduate and Professional Council and the UC Council of Student Body Presidents published a joint statement on Nov. 20, supporting Ora and condemning the process for reviewing misconduct cases against the Regents.

“We believe Rebecca, and we agree that the process for reviewing her case is deeply flawed. Regents Policy 1112 essentially requires Regents to hold themselves accountable by tasking a three-member panel of Regents to oversee an investigation. This is not survivor-centered, trauma-informed, impartial, or just, and it clearly prioritizes the powerful over those who may have been harmed,” the statement reads.

The leaders further called on the Regents to adhere to the same Title IX policies as students, staff and faculty, calling for further accountability by state elected officials.

Ora first spoke during a June 2018 Regents meeting about her general experiences navigating Title IX as a graduate student — not relating to Kieffer — and was approached by someone following her comments.

Ora said she had told the person about what had reportedly happened with Kieffer in 2014, when he let her know that he was a “responsible employee,” also known as a mandated reporter, which means he is required by UC Title IX Policy to report Ora’s story as an instance of “sexual violence, sexual harassment or other conduct prohibited by the policy to the Title IX officer or designee.”

Ora was given a few options by the case’s mediator: pursue a case against Kieffer, or let it go. If she pursued a case, she would have to decide whether to go directly into an investigation against Kieffer or attempt to settle through the internal alternative resolution process, where a mediator would handle the case directly with the appointed Regents.

“Even though I’ve been a student leader for so many years, it took me this horrendous conversation to realize like, ‘Oh, wow, I do need to follow this through,’ because it’s not a matter of whether I’m okay or not and how many meetings I have to step out of and avoid. It’s a matter of somebody with such lax judgment is determining the consequences of all of the perpetrators in the system,” Ora said.

During public forum last week, Ora said she was encouraged at the time of reporting to “informally resolve the matter so as to avoid an investigation” and said in the interview that she felt pressured then by the case’s mediator to first handle the case internally.

“I was given no direction and I had no idea what to choose, so I just chose the one that seemed the safer one.”

But Ora said that earlier this year, the alternative resolution to handle the case internally failed. She described the Regents’ response to her allegation as “deeply disappointing.”

“They were so invisible on any item that was clear to me that there was no use bothering to continue negotiation,” she said.

Ora’s case will now move on to the outside investigation process.

Ora told the Nexus she chose to speak during public forum due to frustration not only with the Regents’ system, but the entire University of California process for investigating sexual misconduct, which takes years and often re-traumatizes the person reporting sexual misconduct in the process.

At public forum, Ora discussed how the years-long investigation process has personally affected her, specifically her mental health and relationships.

“I’ve been told not to bother trying to fix the world and told to let it go. I’ve been excluded from committees because of Kieffer’s presence, I experience regular panic attacks and have fallen behind in my academic progress. I’m afraid of being hacked and of being harassed and followed, as I’m aware other [people who reported sexual misconduct] have been. I had to move, I’ve lost friends and relationships,” she said.

“Until now, I’ve tried to follow the appropriate process, but it has failed because it is fatally flawed,” Ora said during public forum.

“I know that all the headlines have been about someone accuses someone of something. And I do think that is a problem, like yes, somebody did something to me … it did harm me. What I think is the larger and more long-term problem to fix is UC Regents wrote a policy for themselves that is unjust and inappropriate,” Ora said.

“This all happening at this very moment that we have impeachment hearings going on in the government, we have to beg the question of what is oversight of power,” Ora said.

“If the standards for them are lower than those for the rest of us, then we’re doing something horribly wrong.”