Breakups aren’t always the easiest or most painless experiences to go through; they can be some of the messiest parts of the college experience. So, save yourself the brainpower and send your soon-to-be ex one of these ten songs we’ve diligently curated. Who doesn’t like a good song recommendation by their (soon-to-be ex) significant other? 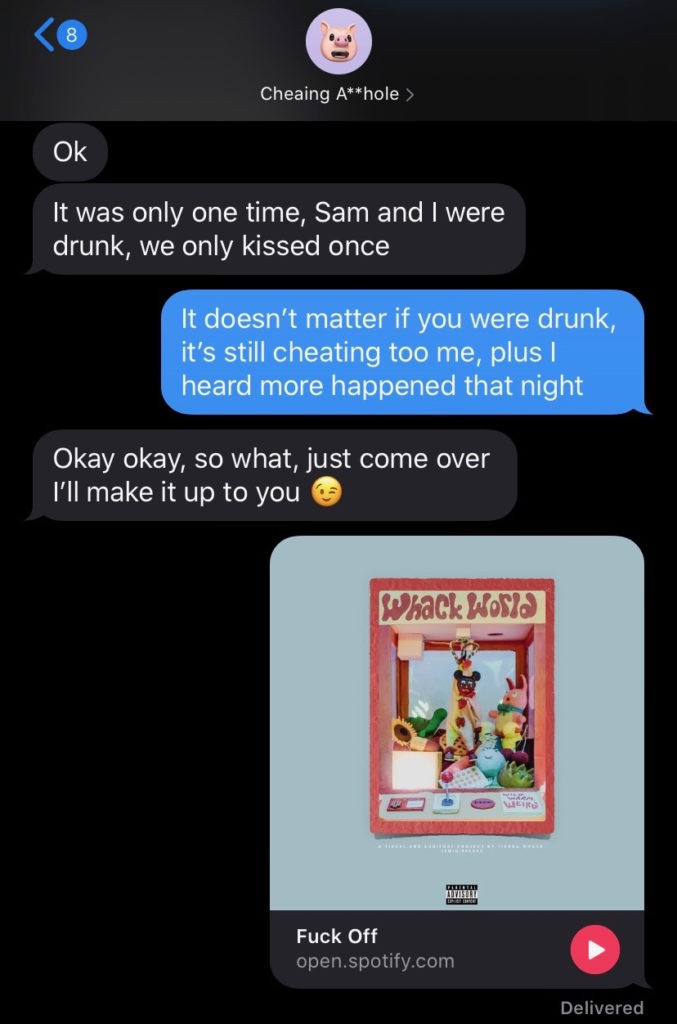 Lil Uzi Vert had it right when he made this song off his mixtape, “The Perfect LUV Tape.” Vert is no stranger to heartbreak, making this song even more fitting for the occasion. So if you’re having trouble dumping too-controlling Kyle, just send him this song — the first couple lines will make it clear: “Now I do what I want / Now I do what I want.”

After countless disappointments, gaslighting and manipulation, you’ve had enough and there is nothing more they can say to you to change your mind. There’s nothing else you want to tell them and Tierra Whack says it perfectly: “Fuck off!” Whack leaves it all on the table with this song: “You broke, you ain’t no good for me at all / I wrote this ’cause I feel ten feet tall / I know you don’t ever wanna see me ball” and “You remind me of my deadbeat dad.”

This one’s a double whammy as it can double as a song title you send to your ex just to be cheeky, but it’s also a song you can simp to after realizing that the post-breakup sex you had with that one girl in your section just made you feel awkward and even more shitty. Cheers!

How do you break it to the Type A pre-med student you’ve been dating for a couple of weeks that you really aren’t looking to be a part of his 10-year plan in which he’s already scheduled your 25-minute lunch dates during his residency at U. Washington? Well of course, just take TLC’s classic, literally, and let him know you aren’t looking to date a scrub-wearing micromanager.

What do you do when you accidentally lead someone on for months and now they think you’re dating but you’re really trying to get with their best friend? Just send them this song. There’s no way they won’t get it after repeatedly hearing “I just, I just wanna be your friend.”

6. “I Thought About Killing You” by Kanye West

Some of you cannot wait to get rid of your significant other; you’ve told all your friends you’re going to break up with them but something just keeps coming up. When you’re in the final cathartic state and you’re just done, nothing speaks your mind better than just telling them “Today, I seriously thought about killing you.” 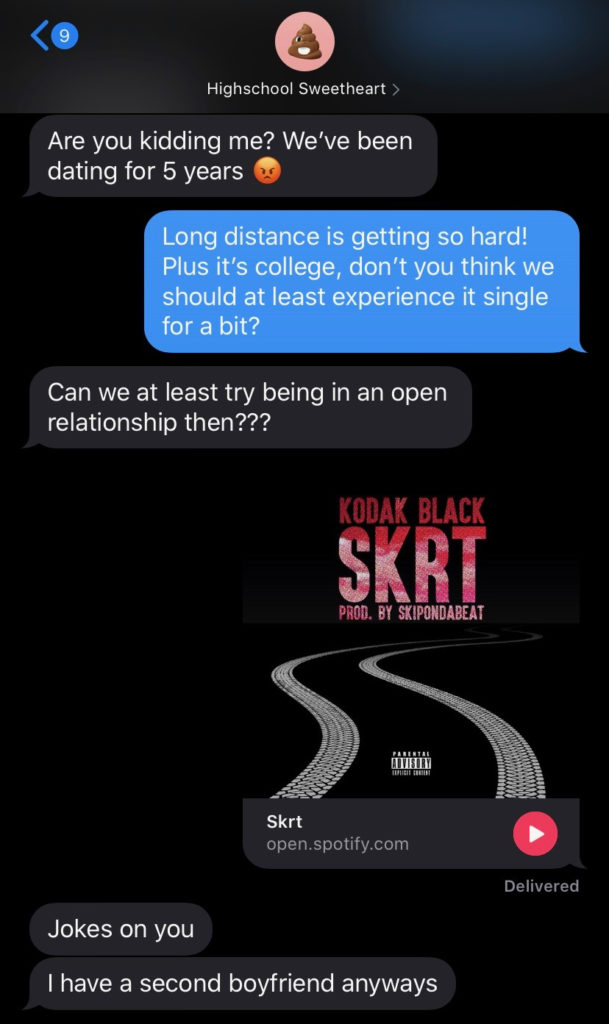 7. “What More Can I Say” by NxWorries

You’ve tried to break up with them countless times, but the conversation always ends in you being convinced to give it another chance and thus another round of make-up sex. Well, not this time! You’ve already got it all off your chest, there’s nothing else to say.

You remember that uncle that would have a few too many beers at your family parties as a kid, especially at random ones like a kid’s birthday party or first Communion? No? Well just imagine it. This song would come on and he’d grip his beer extra tight, use it as a mic and yell at the top of his lungs, “Y ya pa’ qué quiero la tumba / Si ya me enterraste en vida / Ajaja, ayy!” You’d look at him confused, laughing and wondering who hurt this man. Twenty years later, you’re sitting on the floor, tears dripping on your phone in one hand, a bottle of something unholy in the other, sending this song to your ex-amante. Guess who’s laughing now.

Sometimes after all is done, all you want is to be left alone. Although Kaytranada’s version is a classic, Kari Faux’s cover really puts the message across with her chorus, “Don’t hit my line, don’t call my phone / And don’t waste my time, leave me alone.” Amen Faux, amen.