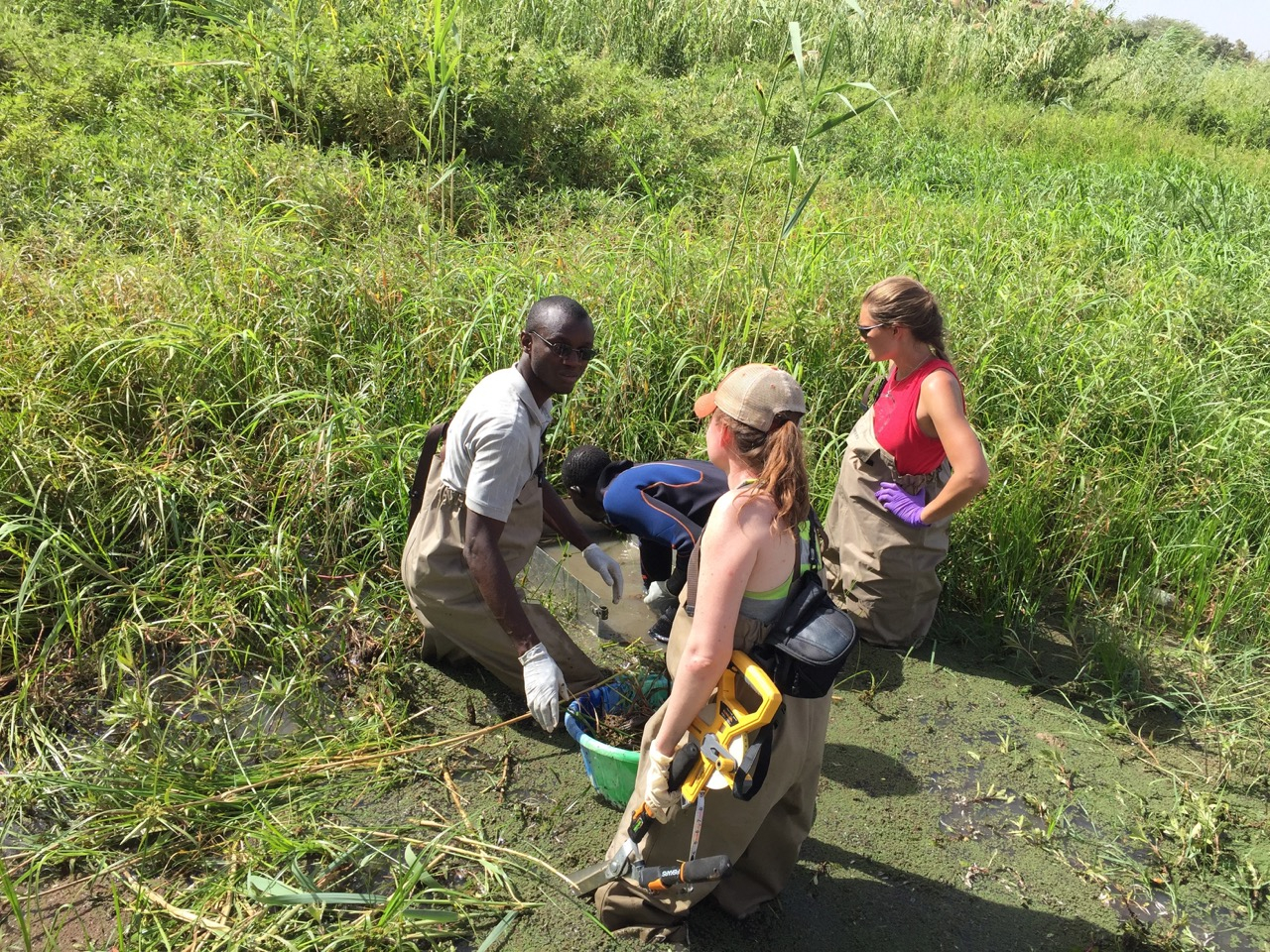 Researchers in Senegal sample for freshwater snails that can transmit schistosomiasis among the unrooted, floating vegetation that is a robust predictor of their presence. / Courtesy of Kevin Lafferty, USGS

Schistosomiasis, an acute and chronic disease caused by parasitic worms of the genus Schistosoma, affects over 200 million people worldwide. Although not found in the United States, schistosomiasis is the second most devastating parasitic disease, according to the Centers for Disease Control and Prevention.

Human infection occurs from contaminated freshwater, where freshwater snails carry larval blood flukes that can then penetrate a person’s skin. Within the blood system, the larvae develop into their adult forms and release eggs. Symptoms occur from the body’s reaction to the parasite’s eggs and can include abdominal pain, diarrhea, possible liver enlargement and bloody urine and stool.

While drugs such as praziquantel can be used to treat patients infected with schistosomiasis, “the problem is people can get reinfected the day after they’re dewormed,” said Armand Kuris, a professor of zoology in UCSB’s evolution, ecology and marine biology department and a biology faculty member in the College of Creative Studies.

Schistosomiasis control has largely been focused on mass drug administration. This approach has drastically reduced the rate of reinfection to a very low percentage — 2 or 3% — of infected people, according to Kuris. “But if there’s any sort of social disruption or any sort of competing costs for public health, and there always are, and for a while it’s not continually pursued with the drug, the disease can come roaring back in three years,” he described.

Along with researchers from numerous other institutions, Kuris and U.S. Geological Survey and UCSB Marine Science Institute ecologist Kevin Lafferty are studying how to improve snail control efforts in West Africa. Their study site, the Lower Senegal River basin in northwestern Senegal, is where the world’s largest recorded schistosomiasis epidemic occurred in the mid 1980s.

“In each village, there are two or three places where people go to water their animals or women gather to wash clothes at the same time. It’s a social thing. There’s a lot going on — kids are out there playing and so transmission occurs between people engaged in various social and economic activities,” Kuris said. “They’re interacting with snails that are releasing these worms that have about less than a day to penetrate the skin of a person.”

Initially, the scientists tried methodically counting and tracking snail distributions as they found a positive relationship between the abundance of snail hosts and human schistosomiasis reinfection.

“It would be really good if we could figure out where the snails are, how many there are, so we would know which places need more help than others,” Kuris said.

However, since the Senegal River is over 1,000 miles long and an open system, factors such as water movement, snail movement and wind can shift the locations of river features.

Kuris and his collaborators looked for other ways to detect snail prevalence that could then predict human infection, such as through certain environmental factors. Their findings are detailed in a new paper in the Proceedings of the National Academy of Sciences.

They found that floating freshwater plants, which the snails feed on and cling to, were the most robust indicator of the presence of snails.

“If you could look at the plants — that really predicts where snails are. And you could do that more indirectly than going in very carefully and you counting snails,” Kuris explained. 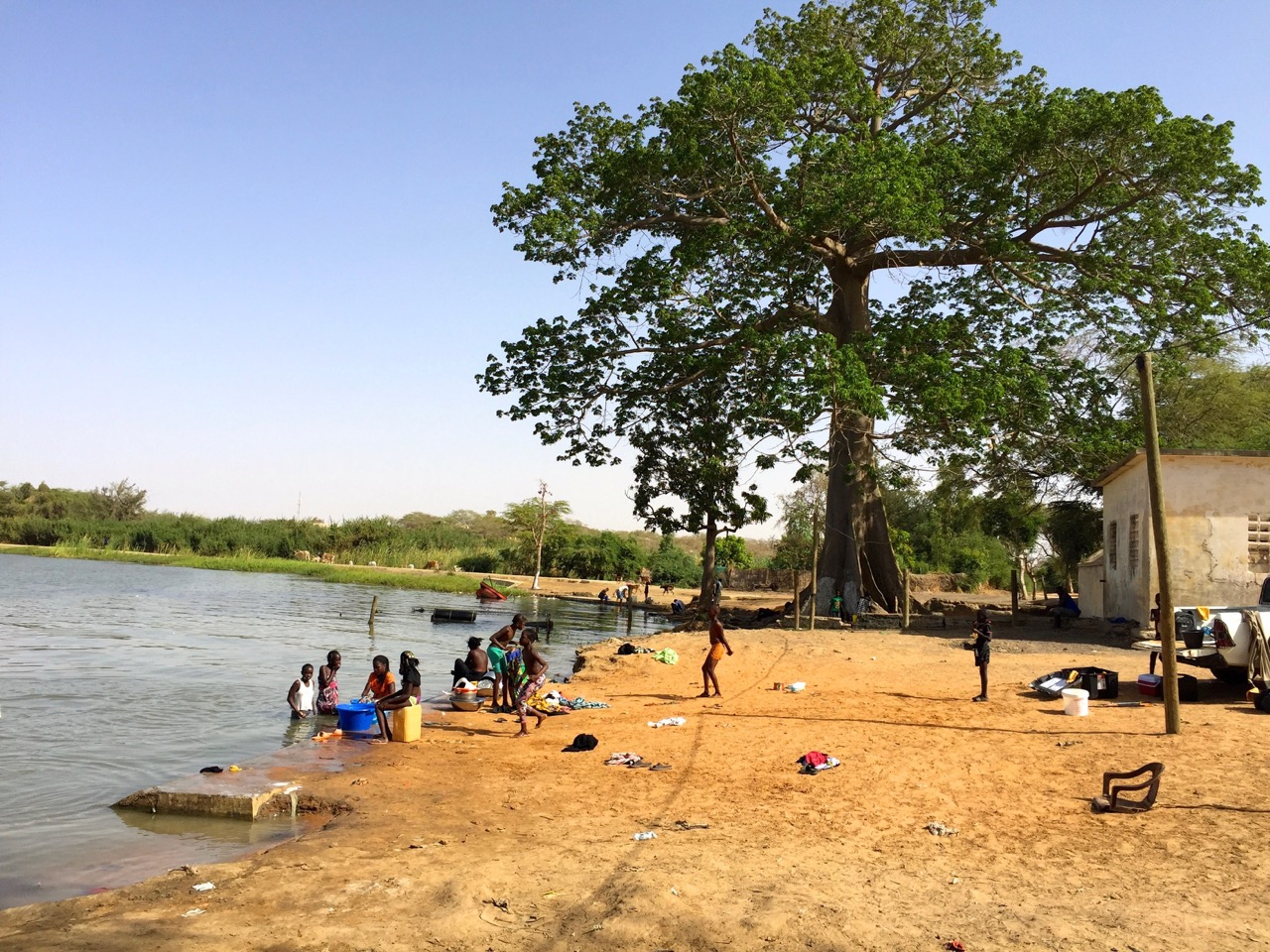 Villagers converge at a water access site in Senegal for social and economic activities, including bathing, doing laundry and providing water for livestock. / Courtesy of Kevin Lafferty, USGS

With this ability to accurately predict where snails inhabit through tracking the floating vegetation, public health agencies have a better idea of which areas to address for treatment and can get a better sense of infection rates. Snail control efforts, including using chemicals to target the snails or placing snail predators, can also be carried out.

“Even though the percentage of people infected has gone down, the caseload has not gone down. It continues on up. This is the combination of medical issues, public health issues and ecology, because in the end, it’s about studying snails,” Kuris said.

Another key point in the study is the potential to use drone or satellite imagery instead of small surveys to track snail prevalence. The vegetation and other snail habitat features can be easily seen in aerial images.

“Now that we really understand that if we could get a good grip on quantifying the floating vegetation in particular, we could get a better idea of where the snails are and the infected snails are then likely to be by using this relatively inexpensive remote sensing approach. Because right now it’s very expensive,” Kuris said.

Instead of having trained people dedicate hundreds of hours to go out and attempt to estimate snail abundance and still end up with potentially fallible data due to temporal factors, remote sensing strategies may help provide accurate estimates of snail habitat coverage and site areas. This enables possible “large-scale, high-resolution estimation” of infection risk, the paper states.

In addition to providing a less costly method to study schistosomiasis transmission, satellites and drones can help regions with fewer resources to better control the spread of the tropical disease.

“There are other places that are much more challenging [to study than Senegal], and so a remote sensing approach will really help the work in some other areas,” Kuris said.

Kuris emphasizes that coming up with a more effective approach to snail control will play a key role for global schistosomiasis control. He and his research team are also exploring the use of snail predators, including prawns, in the Senegal River to better control snail abundance.

“Because [the prawns] are crustaceans, they have shells. Calcium ions are uncommon in freshwater, and so edible calcium by eating snails really helps something like a crayfish or a prawn,” he said. “This also can be applied to other areas where there’s less money.”

In this very extensive study, Kuris recognizes the contributions of his colleagues to the project.

“It’s an honor and a challenge to be able to work in West Africa on something like this. You need a lot of very dedicated people … especially the Senegalese working on this.”