The UC Santa Barbara administration, in collaboration with student organizations both on and off campus, held a public forum Wednesday evening at the Student Resource Building, aiming to open discussion between the university and students regarding the university’s response to the recent allegations of sexual assault against fraternity Sigma Pi. 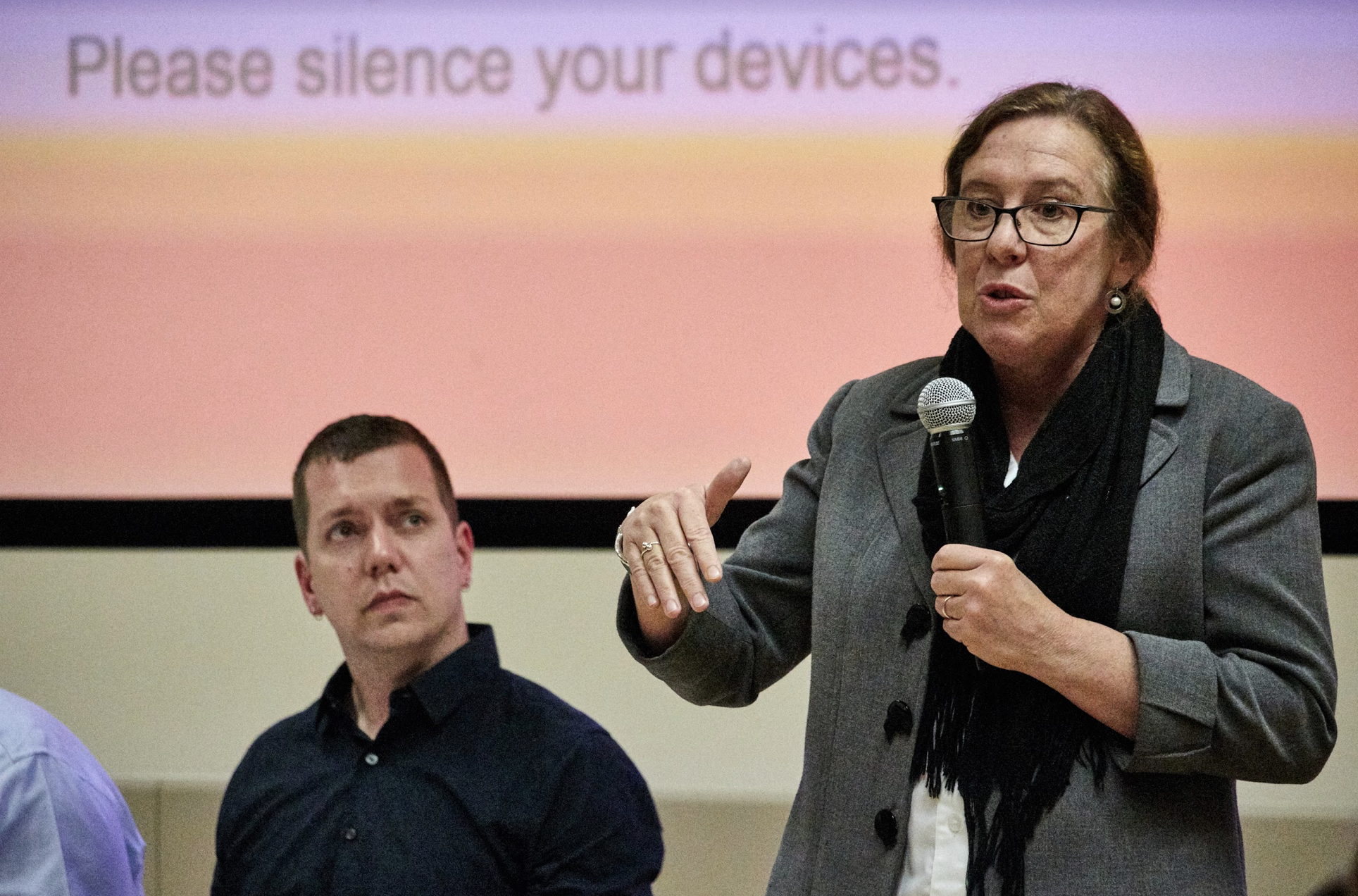 The forum was held by the university as an attempt to clarify misinformation regarding the allegations and for students to have their questions answered about the administration’s steps toward preventing future instances of sexual assault.

Margaret Klawunn, vice chancellor for student affairs, opened the forum by explaining that the university sent out a mass email on Oct. 30 in response to the alleged sexual assaults in order to clarify misinformation regarding the prior two timely warnings — one about the reported use of drugged drinks at fraternity events, and the other about a reported rape at the fraternity Sigma Pi.

“Because of the amount of concern and confusion we were hearing as a community, we sent out quite a lengthy email… trying to clarify that information, what the reports were that we’d received, what a timely warning is,” Klawunn said.

She added that the university also wanted to provide students with a list of resources for survivors of sexual assault, and also to make sure “that students knew where and how allegations could be reported.”

Title IX Director Ariana Alvarez followed up by walking forum attendees through the process of submitting a Title IX report. A student can submit reports of sexual misconduct — anonymously or not — either online, over the phone, via email or in person; the office will then establish a case file and reach out to the student in order to explain how they can move forward with the case, Alvarez explained.

However, that can only happen if the complainant responds to the office’s follow up, she emphasized, explaining that if students submit through an anonymous report and provide scarce information, it can severely limit the office’s ability to continue a case.

“If it seems that we have insufficient information, meaning not enough information to move forward with one of those response options, then we may proceed with closure. That doesn’t mean we can’t reopen [the case] when we receive new information in the future.”

Alia Reynolds, president of Students Against Sexual Assault, emphasized to the panel and attendees that communication between the university and students needs to be open at all times “without students having to ask for that.”

“I think students need access and communication of this information continuously and constantly, versus sending out updates on everything that’s been done after the fact,” she said.

Many students pressed the panel for answers on what the university is going to do moving forward regarding the allegations against Sigma Pi.

“You have answered [with] appropriate actions to take once the investigation is complete,” one student said. “With all due respect, I believe you still haven’t answered the question about what actions are being taken now against these fraternities.”

Miles Ashlock, acting associate dean and Office of Student Life (OSL) director, said that as soon as the OSL members heard of multiple allegations against fraternities in I.V., they held a meeting with the Interfraternity Council (IFC) to have a “long and very open dialogue about our very explicit concerns about the reports that we had received.”

“You have answered [with] appropriate actions to take once the investigation is complete… With all due respect, I believe you still haven’t answered the question about what actions are being taken now against these fraternities.”

“The IFC council made a decision immediately in that room… to create a self-imposed moratorium on social events. They originally imposed that for four days, and after that period they reassessed and decided to institute it indefinitely while ongoing discussion and internal rulemaking and conversations with the university administrators and advisors continued,” Ashlock said.

Klawunn added that the IFC’s ban on parties was just one step in creating a safer environment for students, but another student pointed out that the moratorium would only cut off the liquor and leave the root cause ignored.

“[We’re] saying we don’t want to have parties in these houses where people are going to be unsafe,” Klawunn said. “We believed that not having social events in those houses until we could put some safe steps into place was the right direction, and so that’s where we stand.”

Students voiced similar concerns about the university’s Rape Aggression Defense (R.A.D.) initiative, a sexual assault defense training program offered through the UC Police Department. One student emphasized that getting to the underlying cause of the sexual assaults should be the university’s primary focus, rather than creating defense programs.

“It seems that the R.A.D. training is the only tangible outcome of what we’ve heard going on  campus, and it seems as though [it’s saying] ‘Let’s train women to defend themselves’ instead of ‘Let’s get to the root of the problem,’” the student said. “There’s a culture, there’s a problem with these criminals out there who are doing this who think it’s okay — and they’re getting away with it.”

Eli Diaz, a second-year pre-economics and accounting major, also voiced his concerns over the language used in the timely warnings, particularly over the word “victim.”

“I heard Ariana, the Title IX officer, use the word ‘victim’ to refer to survivors and I feel like it’s been widely accepted that ‘victim’ isn’t the right word to use for people that are survivors of sexual violence. That felt like a strong disconnect, especially coming from someone that is from Title IX,” Diaz said in an interview with the Nexus.

Ashlock explained to forum attendees that the university must be careful when it comes to the use of the term “survivor” compared to “victim” or a neutral term such as “complainant.”

“When we’re trying to hold someone accountable, it actually puts us in a less credible position to use the term ‘survivor.’ We are expected to be neutral, and if our investigators are making this linguistic assumption of the truth, it actually degrades the credibility of the case of the investigation when it goes before a hearing or a trial,” Ashlock said during the forum.

Klawunn further mentioned that in the immediate future, the Task Force for Safer Social Events — an ongoing project organized by Assistant Vice Chancellor for Student Affairs Katya Armistead, Associated Students President Alison Sir and Klawunn — will attempt to bring organizations from all over the community, including IFC, the OSL and the Isla Vista Community Services District, among others, to enact change for students.

However, one student believed that allowing IFC to take part in the task force could lead to a bias in the task force’s actions, referring back to the self-imposed moratorium. Armistead countered by stating that not including IFC would be counteractive to the change trying to be made.

“Here’s the thing, if we’re going to make change, we’ve got to make change all over. And I think it can be really dangerous to not include any entity,” Armistead said.

“I think it’s important that we all work together as a community to make some really positive change. I’m not comfortable not having IFC nor any group on this task force. We have to work together to make change.”

lots of blathering and hand wringing by a ridiculous number of organizations. this is a police matter. If and when arrests are made, charges filed, and a conviction ensues the perpetrator will go to jail. it would, however, be lovely to see UCSB burn over this. Their Title IX record is abysmal.