A plan to create an Associated Students app — one of President Alison Sir’s campaign ambitions  — gained footing Wednesday night after the Senate voted to move forward with the hiring of a software developer. 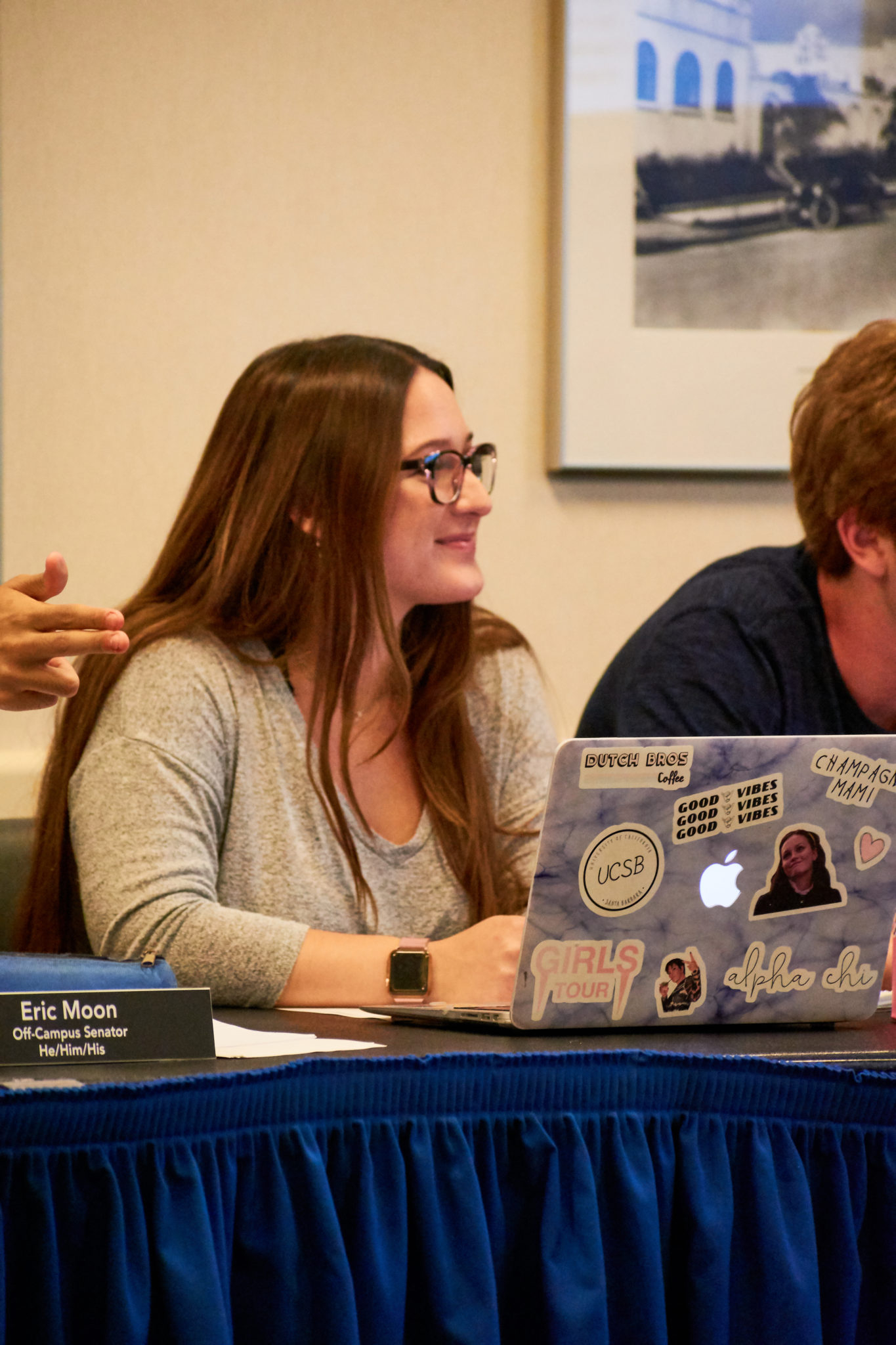 The app was introduced to the A.S. Senate through a resolution authored by Letters and Science Senator Olivia Campos (above) and Off-Campus Senator Tianna White. Ida Kazerani / Daily Nexus

The app was introduced to the Associated Students (A.S.) Senate through a resolution authored by Letters and Science Senator Olivia Campos and Off-Campus Senator Tianna White; however, it was Sir who first proposed the idea during her presidential campaign in the Spring Quarter 2019 election.

“We’re keeping it simple,” Sir said to the Nexus, explaining that ideally, the app will have two main features: a “feed” with all Office of Student Life (OSL) organizations and A.S. events — similar to other social media apps, with reminders that can be customized to each student — and a notification system that would inform students of free food available on campus.

If there is, for example, a “catered event on campus with lots of leftover food” the app would then alert students, Sir explained. Users can also input their food preferences into the app and indicate any food allergies they might have.

“This is gonna be the hook that brings people in,” Sir said.

Sir, who has spoken to the Nexus several times regarding the project, said her goal is to bring “A.S. out of the dark ages” with the app, which would contain all A.S. and OSL-related sources in one place.

Campos and White’s resolution echoed several of Sir’s points, stating A.S. resources “are in need of being updated and more readily available to the student body.”

“The student body does not have a cohesive source of information regarding Associated Students and the Office of Student Life events and meetings,” the resolution states.

Campos said that Sir initially approached the Senate a few weeks ago, looking for the senators’ support for her project. Campos and White then offered to write the resolution in support of the app.

“[The app] follows closely with a lot of things we hoped to accomplish as a 70th Senate,” Campos said to the Nexus. She added that she believes the app will make it easier for students to see the programs and resources available to them.

During Senate’s meeting on Wednesday night, College of Engineering Senator Diana Reyes Carrillo brought up her concerns about the app, pointing out that creating it would be “time consuming” and that it is “naive” to start the process of creating an app if there “hasn’t been research if students want one.”

The hiring of a developer would be handled by A.S. Executive Director Marisela Márquez, according to the resolution. During Senate, Internal Vice President Alli Adam explained that a “significant portion” of the app has already been built by UCSB Information Technology (I.T.) and that a software developer would bring the “final touch.”

Adam said that Márquez plans to hire a developer within two months but does not know how long it will take the hired developer to finish the work started by I.T.

This is literally such a waste of time.

It would be great to have a place where you can see all the events and resources. I often turn to Facebook and Instagram for finding out events on campus, but it’s only by working the algorithm that I get notified of some events, but not all. I only find out about a few through tabling/word of mouth/flyers. An app or website with all of this information would be amazing, a big improvement. UCSB and Isla Vista should be doing all it can to increase food security and decrease food waste, so the feature to post about extra food could… Read more »