The Daily Nexus
News
“We Will Believe Survivors”: A.S. Senate, I.V. CSD Release Statements in Solidarity With Survivors of Sexual Assault
November 6, 2019 at 12:07 am by Arturo Martinez Rivera 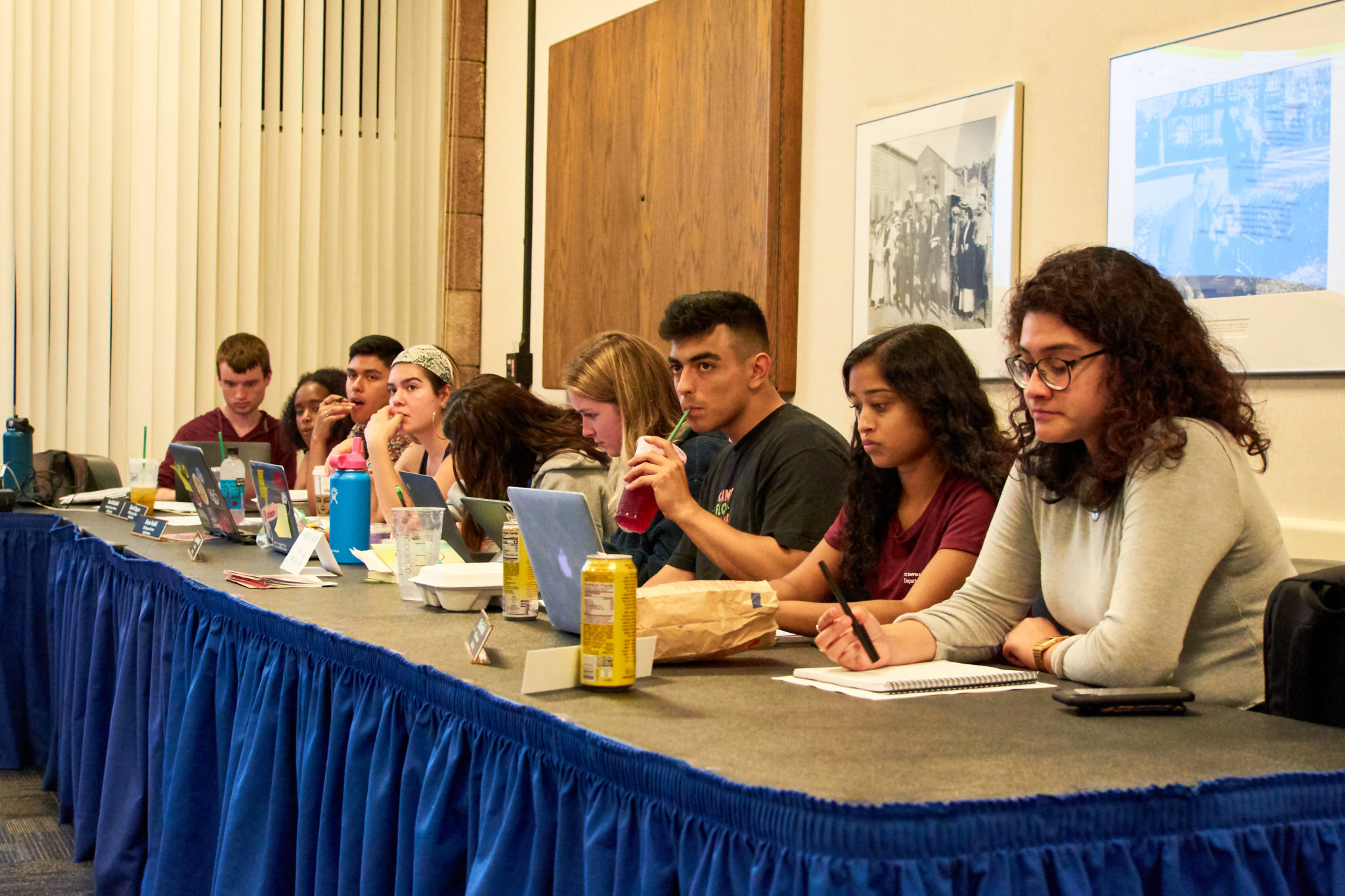 Members of the Senate (pictured at its meeting two weeks ago) release a statement in support of survivors of sexual assault last week. Ida Kazerani / Daily Nexus

The Isla Vista Community Services District’s statement was released in an email to its mailing list on Oct. 24, while the Associated Student (A.S.) Senate’s statement was posted on the A.S. Senate Facebook page on Nov. 1.

There have been three allegations of sexual assault brought against Sigma Pi; the first two were reported by the Nexus on Oct. 24, while the third was reported by the university through a timely warning sent out on Oct. 28.

Off-Campus Senator Daniel Segura was the one who first brought up the recent allegations to the Senate during the Wednesday night meeting, emphasizing the importance of making survivors of sexual assault aware of the resources available to them through A.S.

The Senate then went into a working group to write a draft of the statement, which was later posted on Facebook alongside a note encouraging attendance of a town hall hosted by Students Against Sexual Assault on Nov. 14.

The statement condemns “unsafe spaces” and “any student organization that perpetuates the harassment and abuse of any person”; it also calls for the UCSB administration to respond to “environments that enable sexual violence.” The statement did not name any particular organization or environment.

In its statement, the Senate added that it believes these allegations are not isolated incidents and are instead “a reflection of a greater culture that allows sexual violence to continue.”

“This harmful culture needs to be addressed and stopped,” the statement read.

Internal Vice President Alli Adam echoed similar points in a statement to the Nexus, stating A.S. “[doesn’t] condone what’s going on in our own community and [has] no problem standing up to fellow community members and confronting this unfortunate culture.”

She also mentioned that the Senate emphasized the need to demonstrate support rather than simply listing resources for survivors.

“Something that [the senators] brought up that I thought was really powerful is they didn’t want to just list resources because students kind of feel like that’s redirecting the issue, but [the senators] all were willing to make themselves available as well. So I thought that was a really unique perspective to take, and I’m proud of that,” Adam said.

“No one should have to spend their nights out in fear. It’s on us to take a deep look at the culture that enabled this incident, and correct it,” Board President Spencer Brandt said in the statement.

According to Kristie Nguyen, board director for the I.V. CSD, the problem doesn’t lie within Greek life as some social media posts have said, but with the individual.

“I don’t want to see [people] blaming the Greek community for recreating this culture because this culture has already been prevalent throughout society. It’s a huge epidemic,” Nguyen said in a phone call with the Nexus.

“When you look into it, a lot of people in the Greek community – like fraternities – don’t condone that kind of behavior. It was more of an individual choice to make those disgusting decisions to do that to people. We shouldn’t be blaming anyone but the people who have done what they did.”

The I.V. CSD’s statement was sent out on Oct. 24 — prior to the timely warning sent out by UCSB to all students on Oct. 28.

Brandt said he was “incredibly frustrated and disgusted” by the alleged crime in the timely warning sent out on Monday.

“The fact that under all the scrutiny that the university is providing [Sigma Pi] right now, there was another incident, really speaks to the institutional problem, a problem with the culture,” Brandt said.

The statement also lists a variety of resources for survivors of sexual assault offered by the I.V. CSD and UCSB.

“We can’t just stand by without doing something. While we’re already providing services like our interpersonal violence and sexual education and prevention program along with the survivor resource center, we also just want to continue to make it clear what our values are and how we will support survivors,” I.V. CSD Director Ethan Bertrand said.

“We will believe survivors and we will stand with that.”