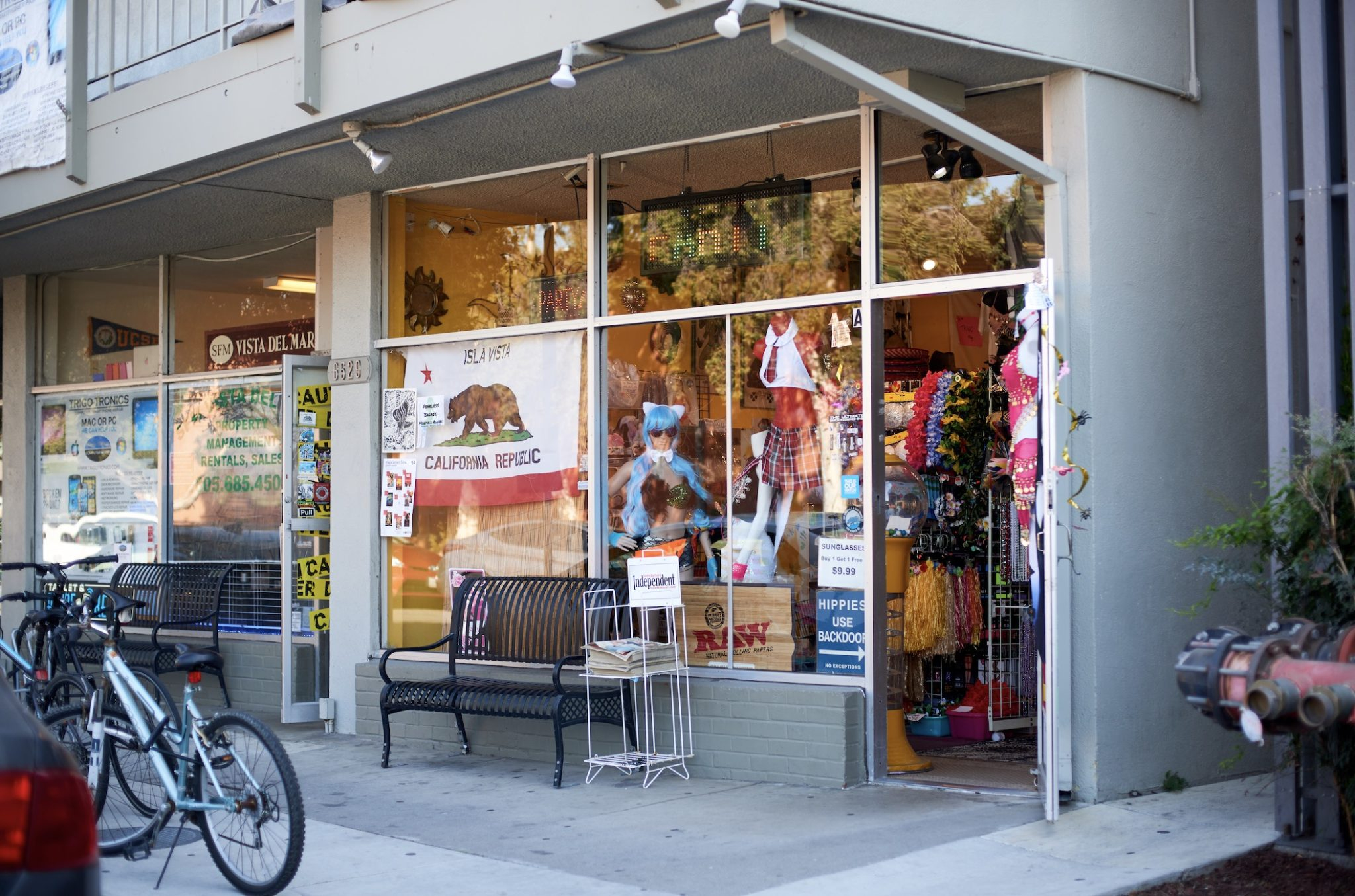 The tiny, eclectic boutique, which is tucked into the corner of Trigo Road, first opened in October 2006 as a women’s clothing store. But over the past 13 years, it has grown to become the Halloween hub of Isla Vista.

In addition to the myriad of costume-esque clothing and accessory options, Sweet Jane sells birthday supplies, festival clothes and Isla Vista-specific merchandise — like “U Can Study Buzzed” shot glasses and Isla Vista flags, various bongs and pipes and sunglasses.

“We’ve never raised the prices on our sunglasses,” owner Stella Termin added, waving toward the towering display by the cash register. “They’ve always been buy-one-get-one.”

Even though Sweet Jane is known for its costume- and festival-ready inventory, students flock to the boutique at all times of the year, drawn in by the boutique’s unique Isla Vista college town vibes.

“I keep hearing it over and over again, ‘I love this store, I want everything in here,’ and it’s like yeah, this is the store where you want everything you don’t probably need,” Termin laughed.

“I think it’s just because [the store is] unusual.”

Having been a small business owner in I.V. for so long, Termin has seen how the culture of the college town has changed as students roll through it.

For a long time, Termin said she sold a lot of clothes and jewelry with peace signs. “The kids were into revolution.”

“I never bought anything in camo or anything, and all of a sudden they started having camouflage parties,” she said. “I can see that there’s a difference — there’s a big difference.”

Termin attributes the change in culture in I.V. to the rise of social media, pointing to the Facebook event for Floatopia in 2009 that drew over 12,000 people to I.V.’s beaches.

“We were actually on the sand; we were giving out water,” Termin said. “Let me tell you — I’ve never seen so many people on that beach.”

“It took a half an hour just to get up and down the [beach] stairs; you couldn’t walk anywhere without stepping on a bottle or a can,” she added. “All the recycling people, the families, it was like their Black Friday.”

“Had that not been posted on Facebook, we could have maybe still had, at least for a few more years, some real Floatopia,” she said.

“It’s kind of sad, ‘cause I see things change, you know, since when I first started.”

Just in the past few years, Termin has seen many I.V. businesses come and go — she named Firehouse Subs, Giovanni’s Pizza Restaurant and 212° Hotpot, which closed recently.

She added that while some of the rent prices may seem doable at first sight, businesses have to consider the weeks or months during which students vacate Isla Vista, like over the summer or winter break.

“It’s not a continuum,” she said. “I’ve been lucky, knock on wood, because I was able to strategize and realize what I needed to do — I don’t know how — what I needed to do to be able to provide for what Isla Vista needed and wanted and to have fun.” 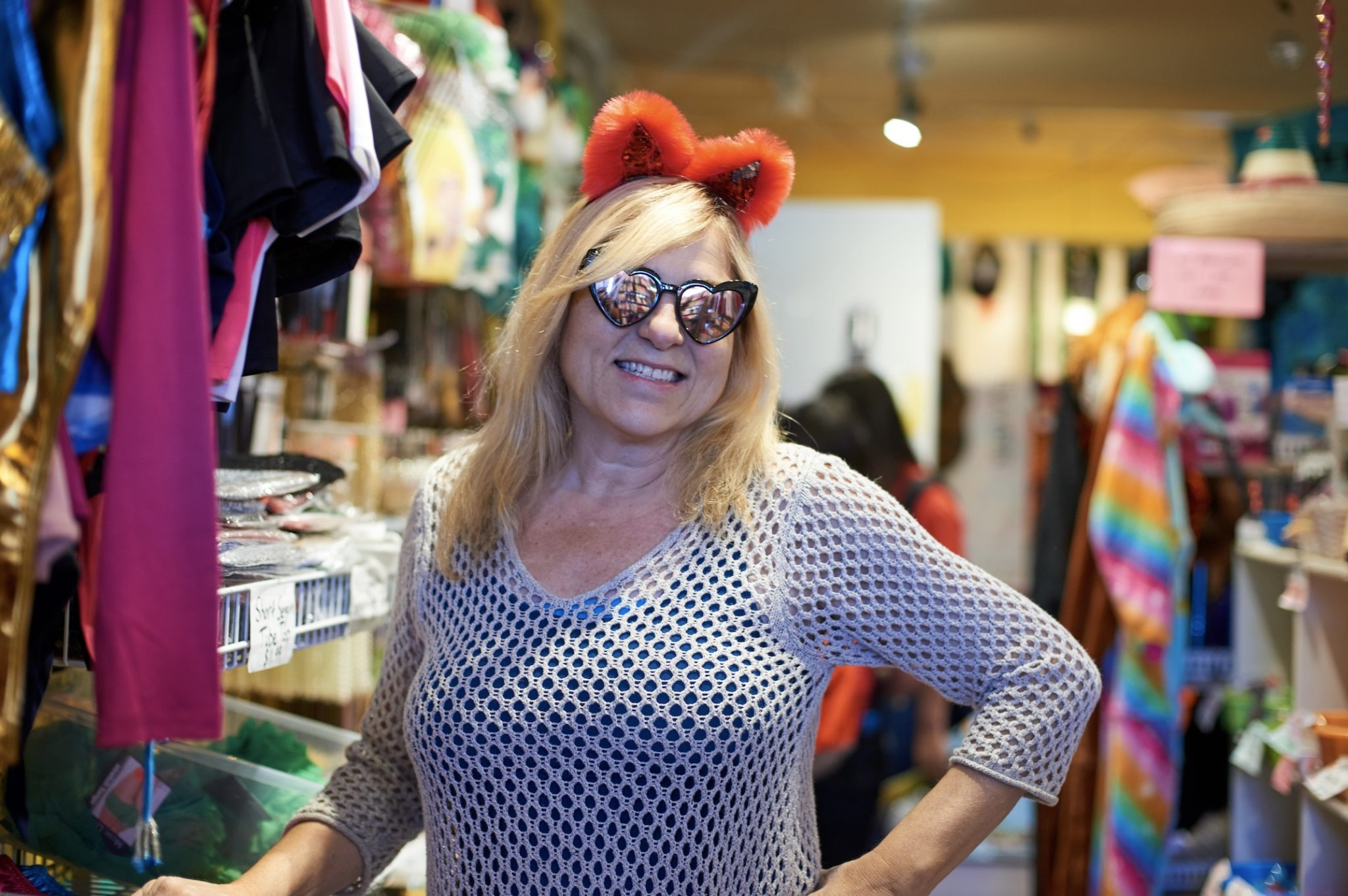 In addition to the high rents in Isla Vista, Termin added that there are a handful of licenses and taxes that she has to pay every year that make running a small business more difficult.

“I just wish that they would give smaller businesses, especially those in seasonal, this type of environment, more tax breaks and more of tax initiatives, instead of pounding us over the head as businesses that make over half a million dollars a year,” she said.

As for Sweet Jane’s success, Termin said she thinks she has been around long enough to be able to maintain her level of business through word of mouth and the fact that most of her prices are cheaper than Amazon’s.

“I just think it’s being nice, treating your customers well, understanding what they need, put a smile on your face and be lucky,” she said.

Sweet Jane has rooted itself in the community, particularly through a handful of fun traditions. During the interview, Termin was ringing up students and noticed that one student was purchasing items for a birthday.

“Is it a birthday?” she asked. The student said yes, and Termin pulled out a box of buttons and stacks of cups.

“You get to pick a birthday mug and free birthday button,” Termin said.

“Really?” the student said. “These are so cute!”

“It’s fun,” Termin said afterward. “They get excited, because birthdays are big deals, whether they’re yours or somebody else’s.”

In addition to the birthday cup tradition, Sweet Jane creates new sticker designs every month that the store gives out for free. Another student at the register fawned over the newest design, telling Termin that she had all of the most recent ones and that they were her favorites.

While Termin lived at the far end of Trigo Road for a few years in the ‘90s with a then-boyfriend, it wasn’t until a friend brought her here in 2006 that she really saw Isla Vista.

“It’s just nice, over the years, to see the road the store has been on and the different people that have passed through here. So many students have worked here, and it’s great,” she said.

“I think Sweet Jane is well loved, and that makes me very, very proud and happy. It means I did something right.”

A version of this article appeared on page 5 of the October 31 print edition of the Daily Nexus.