The Daily Nexus
News
“Haunt the Loop” Ghosted by Children: Trick-or-Treat Event Yields Lower Turnout Than Expected
October 31, 2019 at 12:04 am by Max Abrams and Katherine Swartz

With over a dozen volunteers in costume, pounds of candy, a table filled with raffle tickets and participating businesses throughout I.V., the community’s annual Haunt the Loop took hold last weekend, transforming ordinary storefronts into candy dispensaries, offering a chance for local children to trick-or-treat last Sunday afternoon.

The only thing missing from Sunday’s celebration? The children. 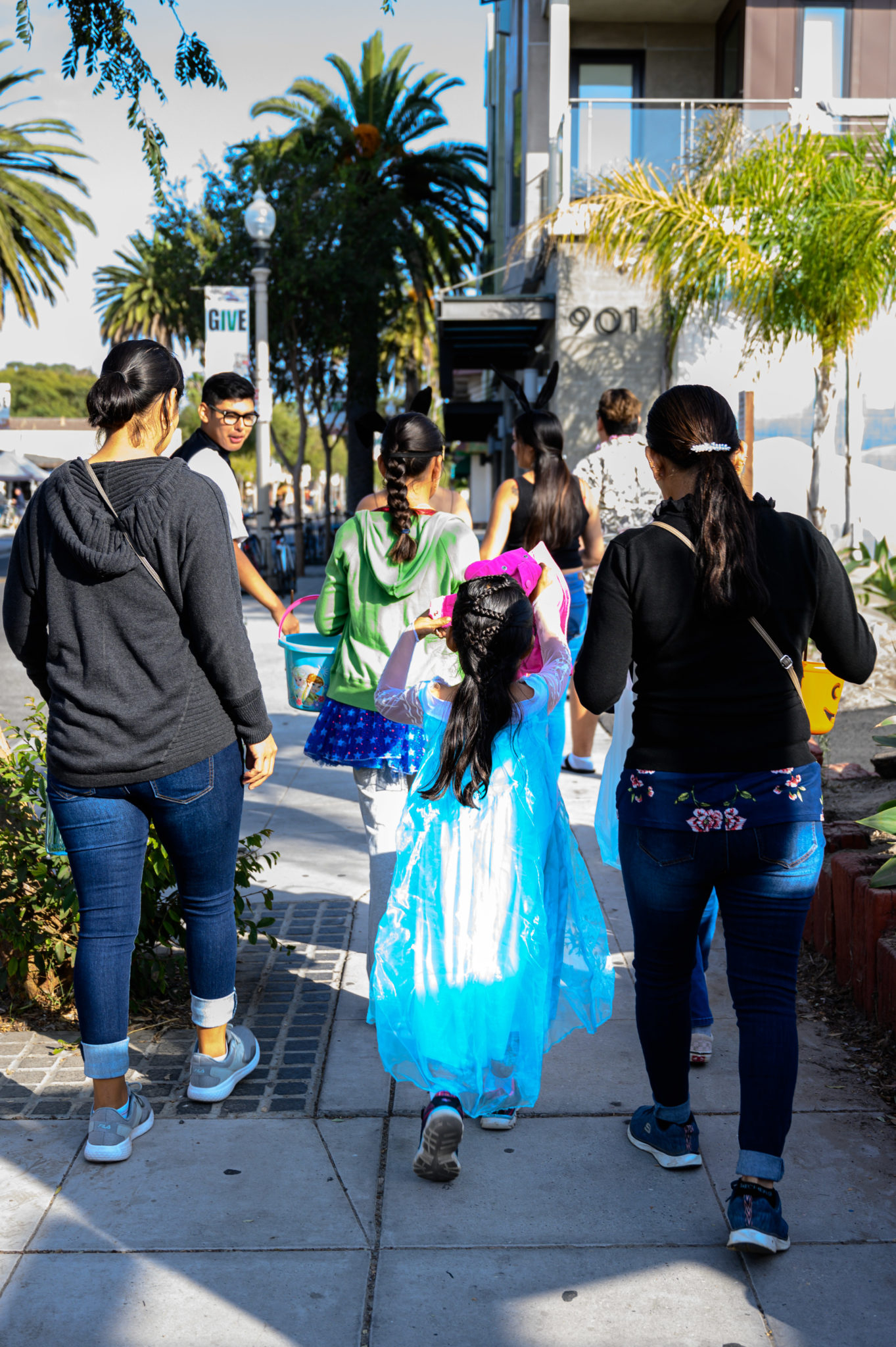 The weekend event drew six people — three of whom were children — down from fifty last year, according to Christian Ornelas, External Vice President for Local Affairs (EVPLA).

“We planned everything; we got all the volunteers. [The] day of, we all showed up, we were all ready … But the only thing is not a lot of kids showed up,” Ornelas said. “Three kids showed up, which is really unfortunate.”

The tradition of trick-or-treating is often lost on those residing in Isla Vista, especially for the local youth in search of bite-sized fun. Events like Haunt the Loop help provide an opportunity to engage in a community often tailored to a much different demographic. According to the last census in 2010, less than three percent of Isla Vista’s 23,096 residents were under the age of 18; within that, less than 0.9 percent were under the age of three.

“I feel like the children around this area don’t really have a normal childhood as other children would have, because they live in a college town,” Joana Gutierrez, a third-year sociology major who volunteered at Haunt the Loop, said.

“They’re constricted of doing many things, especially during the holidays, because it’s not really safe for them to go out when everybody is going out and getting drunk and partying. So I feel like it’s very important that [we] as students take them out to safely trick-or-treat and show them that we care about them having a childhood.”

But only a few volunteers got to answer this call. Trick-or-treating was supposed to be over a two hour period from 3 p.m. to 5 p.m. last Sunday, with volunteers leading groups of children from one spot to another. The first — and only — group to arrive came to the Pardall Center around 3:30 p.m. But around 4 p.m., Ornelas said the volunteer crew began packing up.

This year’s drop in numbers took organizers by surprise. Both the planning and the event itself were based entirely off of last year’s report, according to Shannon Sweeney, the EVPLA chief of staff, who put the event together alongside Andy Ruiz, the EVPLA community events coordinator.

“You can never really guess predictability on the kids’ end, just because every year it’s different — what they might be doing that weekend,” Ruiz said. “The businesses are always so amazing at helping out with that, being very cooperative, allowing us to invite people into their business for community betterment.”

The two worked from a report left by former Isla Vista Community Services District (I.V. CSD) organizer Alex Young, who detailed the process in which organizers hosted the event last year. Like last year, according to Ornelas, the I.V. CSD coordinated with the EVPLA office to advertise the event with posters through I.V. Youth Projects (IVYP) and I.V. Elementary.

The youth-oriented nature of the event proved to be one of the biggest challenges in planning and publicizing it, Sweeney said. While most events targeted for students are advertised through Facebook and Instagram, Haunt the Loop’s audience — children and their parents — required a different kind of grassroots approach.

To tackle that, the EVPLA staff brought their posters to the I.V. CSD, who then shared it with IVYP’s Family Resource Center.

I.V. CSD General Manager Jonathan Abboud said the planning process was “exactly the same as last year,” and couldn’t deduce why the turnout was significantly lower compared to Haunt the Loop in years past.

“It could have been any number of things … sometimes events just don’t have a lot of people come to them. It was a great success last year; it was a lot of people. Who knows why people didn’t come this year?” Abboud said.

Fifteen local businesses in and around the Loop — including Buddha Bowls, Rockfire Grill, Cajé, Amazon and the I.V. Bicycle Boutique — partnered with the EVPLA office to pitch in with candy distribution.

Volunteers were on hand to provide candy to participating businesses, but Ornelas said many provided their own and decorated for the event.

With plenty of leftover candy to spare, Ornelas also is not sure what caused this year’s small turnout. Hosting the event on Sunday afternoon — the same day as last year’s Haunt the Loop — likely isn’t the problem, he said.

Ruiz said the Sunday afternoon slot was chosen for safety concerns for children and for volunteers who would be difficult to schedule during the week.

But with this year’s low attendance in mind, Ornelas is discussing with Sweeney and Ruiz about moving the event closer to Halloween in the future.

Ornelas speculates that the areas to the north of I.V. are a more popular option for candy collecting as “a lot of children go trick-or-treating in the community behind FT” and as it is outside of I.V., which may be safer and more receptive to children.

Instead of working through I.V. CSD and other organizations, Ornelas believes that in the future, the EVPLA office should be more direct in its outreach by keeping more of the workload in-house to draw the most outreach.

This year’s Haunt the Loop was a learning experience, Ornelas said, in part because the responsibility of hosting the event fell onto new shoulders, and the small showing left most involved scratching their heads.

Despite the fliers, pounds of candy and weeks of preparation, when an event doesn’t turn out the way you had it envisioned, Ornelas said: “It just sucks.”

A version of this article appeared on page 3 of the Oct. 31, 2019 print edition of the Daily Nexus.

This is such a mean article wtf lol

How about asking a simple questions “why in the hell would any responsible parent take youngsters trick-or-treating in downtown IV?” Why not look back at your own trick or treating history. Did it ever involve visiting commercial locations in a grimy student downtown with homeless people hanging out in an dirty, unlit park? Slap yourselves and stop wasting money.