The Daily Nexus
News
Delirium Attendance Down by 20%, Special Events Coordinator Discusses Successes, Pitfalls
October 31, 2019 at 12:13 am by Katherine Swartz and Sanya Kamidi

To some students, each annual Delirium concert is similar year to year — they get in a line, someone scans their Access Card, they hear a couple of acts and head home. 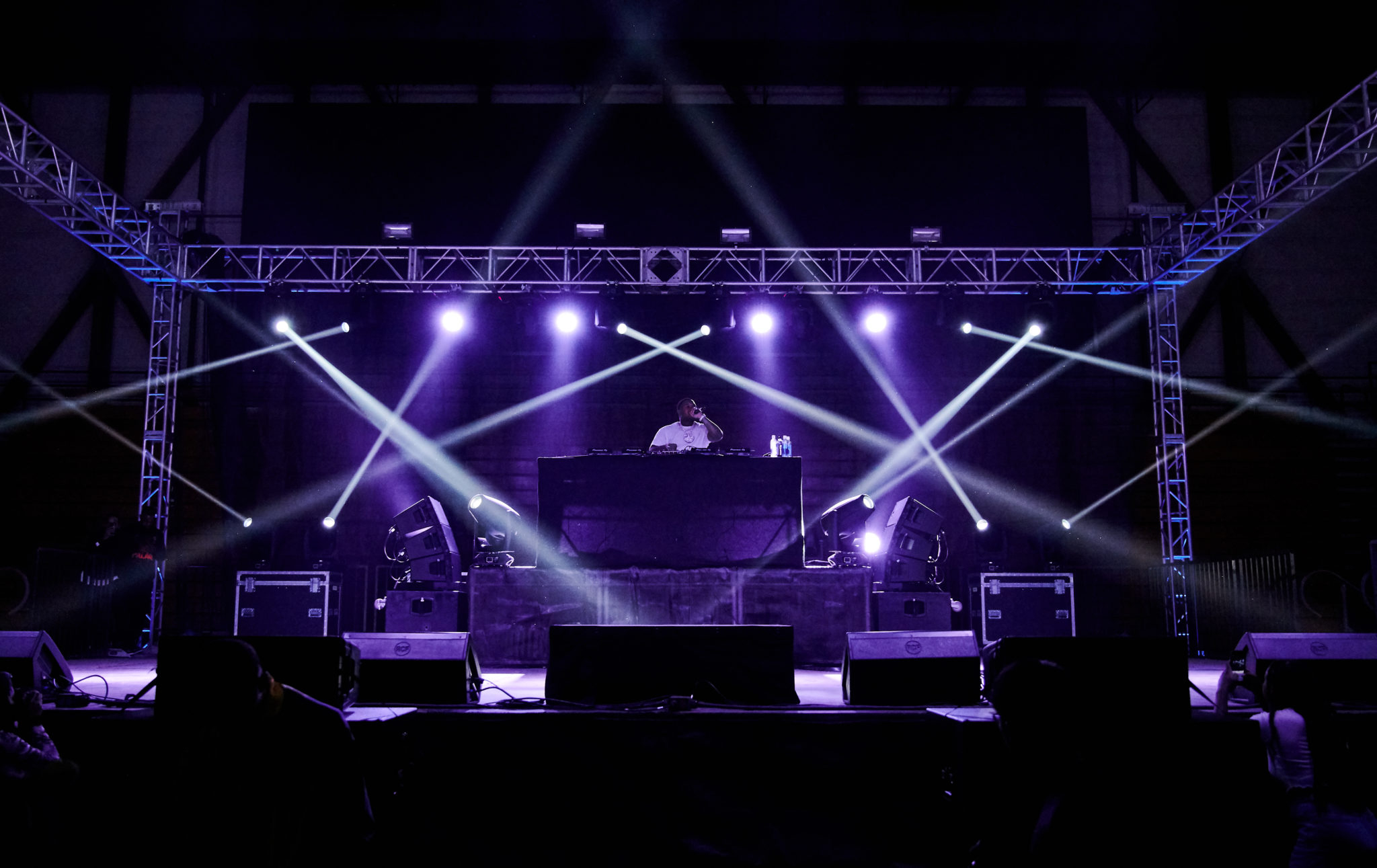 The three-performer ticket, instead of the typical opener and headline, was a welcome surprise to many.  Max Abrams / Daily Nexus

What most don’t see are the logistical successes and problems behind the scenes in the Thunderdome. From volunteer coordination to production set up, the Associated Students Program Board spends the day of the concert coordinating all the moving pieces.

As special events coordinator on the board, Nathaly Pacheco has been planning Delirium since July and was responsible for handling logistics between the program board’s departments during the concert.

Pacheco, a fourth-year economics major, had her first rodeo — but not her last — running a major event during last weekend’s show. Over the course of this year, she will continue the same responsibilities for The Warm Up and Extravaganza in Spring Quarter 2020.

After the performers — Leikeli47, DJ Mustard and Kenny Beats — were announced via social media, the three-performer ticket, instead of the typical opener and headline, was a welcome surprise to many. But Pacheco said the decision was less intentional and more out of necessity.

“We had sent our offer for a headliner and he said that he was really pumped about performing, but the set had to end at around 11:15,” she said. “We don’t want students going out into I.V. at 11:15 … we wanted to keep the students as safe as possible because that’s the purpose of the event.”

But the addition in acts didn’t translate to a larger crowd. In 2018, Delirium sold out on the second day of sales. The final total this year was 4,651, more than 1,100 students — or about 20 percent — below capacity, according to Pacheco.

“The show did not sell out and I attribute some of this to our inability to print posters and quarter sheets for campus by the Monday before show,” Pacheco wrote in her post-show notes to the board.

Pacheco said she believed that the delay in advertisements is what prevented the show from selling out. By having three artists instead of two, Pacheco had to consult more managers each time a poster was edited about the artists’ images.

“You have artists that don’t necessarily agree on who goes before who; they want to be on a different line and like all this other kind of stuff,” Pacheco said.

Additionally, technical issues before the concert delayed starting times by 18 minutes, according to Pacheco.

The scanners used to check students’ Access Cards were not operational for about an hour, so volunteers used ticket confirmations from purchases instead of scanning.

In response, Program Board had to “improvise in the moment,” Pacheco said. Volunteers, who in previous years were only stationed outside to scan Access Cards, were also walking up and down the lines to organize entry.

Pacheco noted that entry into this year’s concert was a smoother process than in past years, attributing the speed of the lines to the higher number of volunteers.

Inside the concert, disconnect between contracted security and program board leadership led to minor problems that Pacheco addressed in her debrief with the board.

For most concerts, the program board hires the outside company Miller Security Guard Services to handle backstage and barricade security. When Miller was unavailable, Program Board instead went with Contemporary Services Corporation, who service professional shows and handle security for other universities.

Even though Program Board has a running policy to not allow students on the stage due to safety concerns, Pacheco was frustrated that DJ Mustard ignored that policy, despite her emphasizing it. She added that Leikeli47’s team had approached her before the show and asked to bring students onstage, but she had to turn down the request for liability reasons.

“Her manager and her team came up to me and said ‘Hey, we usually like to bring students on stage during her set.’ For me as a booker and our board, it’s really nice when they decide to ask us instead of doing it on the spot. It’s like when things are happening, in the moment, there’s very little that you can do to stop something from occurring.”

Pacheco thought the issue was put to rest, until she got texts from other Program Board members saying Contemporary Services allowed DJ Mustard’s team to pull two students onstage.

“We went and we talked to Contemporary Services and we were like, ‘We said no students on stage; this is a professional show,’” Pacheco said.

“The artist is not running the show, this is a school, you have to abide by our rules and regulations. If anything were to have happened, you are breaching a contract.”

In her post-show notes, Pacheco wrote to the board that there were instances of staff spending too much time backstage listening to music and approaching artists for pictures.

“People should not be jumping and dancing side stage at all, we are WORKING the show,” Pacheco wrote in her post-show notes to the staff. “If you want to bop your head tap your feet that’s fine, but I should not see anyone breaking out IV dance moves backstage.”

Despite the various hiccups they ran into, Pacheco was proud of the show her team put on.

“This was like our first really big show, so it was everyone’s first time stepping into this position,” she said.

She added that she had been nervous about the student body’s reaction to the lineup, especially since “people can be pretty ruthless on the meme page,” she laughed.

“I was pretty surprised by how positively the school reacted … I had a lot of people coming up to us, there were people that came up to our office throughout this week, coming to thank us,” she said.

While she spent most of the show running around, Pacheco said she always takes a few minutes during every show to just stand and watch the crowd “dancing and jumping around with their friends,” which reminds her why she loves doing this work.

The next events in Pacheco’s job description are the spring quarter The Warm Up and Extravaganza concerts, but Program Board has been throwing around the idea of a winter special event as well, especially since winter quarter can be gloomy due to the rain. The conversation was “on pause” until after Delirium, but Pacheco is now revisiting the idea with her staff.

Pacheco has proposed the winter concert as a general admission show so it wouldn’t be restricted to UCSB students — a notable distinction from the other Program Board concerts.

Since the event wasn’t part of Pacheco’s official job planned for when the budget was finalized, it’ll take some fiddling with the budget and a higher ticket fee to make it happen, but Pacheco and her team are looking into various weekends and artists to see what they can make work.

“We want to see if we can implement an alternative show somewhere in there to lift the spirits,” she said.

shitty no name artist with no talent. But yeah keep wondering why no one wants to go