The Daily Nexus
Opinion
Why a DIY Vasectomy May Be a “Better Bet” Than Upgrading Your Light Bulbs
October 24, 2019 at 12:00 pm by Raveen Sivashanker

The Voluntary Human Extinction Movement would like you to know that they do not want to kill you. Or themselves. Suicide cults do make for very entertaining television but as VHEMT (pronounced “vehement”) says, suicide is “a hard sell” and “doesn’t set an example others will follow.” Mass murder cults are undignified and frighten the general population, so that was never an option either — not for those hell-bent on wiping out the human race, as VHEMT admit themselves to be.

Followers of VHEMT have instead chosen not to have children and kindly ask you to do the same — and not because they don’t like your choice of spirituality or skin.

The main body of the VHEMT website explains, in great detail, the rationale behind fighting for this absurd, impractical, crackpot and foolhardy cause. VHEMT would like to “Thank You for Not Breeding” (as seen on their official bumper sticker) as doing so means that  humanity will go extinct within a century, curbing environmental damage and minimizing the human and nonhuman suffering that would inevitably emerge otherwise.

You may not plan to comply or even agree with this sentiment, believing that you and your offspring have the potential to positively impact the world. But even the exhaust fumes of the ethical stink. Or, as the modern day children’s book goes: Everybody pollutes! Every unborn being and non-baby has greater innate potential than the hordes of claimed savior embryos and messiah gametes. 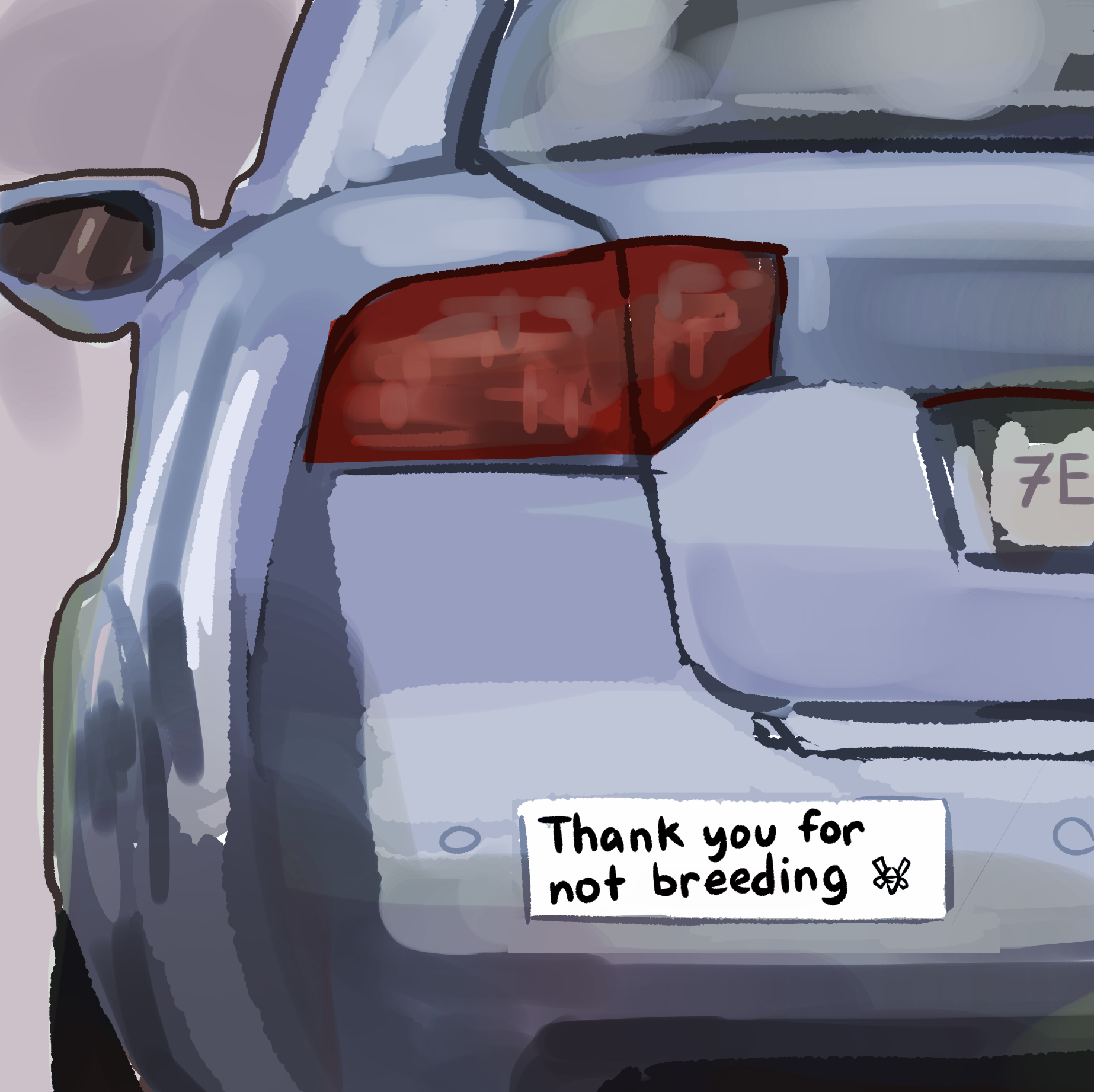 The case that VHEMT makes for the voluntary extinction of humanity is partially based on the harm and suffering that humans impose on other beings.  Human activity has drastically negatively impacted other species’ survival rates. In a 2004 article published in the scientific journal “Nature,” researchers estimated that 15 to 37% of species will go extinct by 2050, given median severity in climate change scenarios and species dispersal. These estimates only take into account the effects of global warming. Other sources of habitat loss from, say, deforestation or river damming, have already caused numerous extinctions and their effects could be exacerbated by global warming.

More recently, the UN published a report directly connecting human activity with the impending extinction of one million plant and animal species. These effects are driven by the demand for resources necessary to sustain a large and growing population and would therefore subside with fewer people. VHEMT argues that we pathologically exploit other species, digging up or polluting their homes in our violent quest for the bounty of the Earth, creating lasting ecological damage.

But until we physically experience the consequences of our destructive actions, they may be considered a little abstract, a little distant. So, more concretely, we routinely induce widespread animal suffering. We certainly produce more injury and death than would exist if we did not.

Describing climate change as a force that humanity collectively imposes onto nonhumans is an oversimplification, however. Discussions of overpopulation are inevitably tangled with issues of global wealth inequality, class, race and women’s rights — reproductive and otherwise — as well as the obvious historical precedents of genocide and eugenics. A group of people, primarily from Western nations, who run around telling people to stop “breeding” may certainly come off as racists wielding bad taste, weaponized and aimed at the global poor.

On the other hand, environmental damage caused by humans, in some cases, has its largest impact not on “the environment” in a general sense. Instead, it largely affects marginalized humans and poorer humans of color. Wealthy people in developed countries produce disproportionately large amounts of emission compared to people in developing countries; however, the effects of climate change disproportionately harm the global poor.

The evidence is clear: Having fewer offspring is one of the easiest and most impactful methods to reduce an individual’s carbon footprint. A 2017 article published in “Environmental Research Letters” backs this statement up by calculating the exact amount of carbon emissions that would be saved. It especially emphasizes that one less Western-born child saves far more emissions than one less birth of a child in a developing nation and that one fewer child can save up to about 40 times more greenhouse gas emissions per year than living car-free would.

In short, upgrading your light bulbs will not resuscitate the drowning polar bears. Undertaking a DIY vasectomy, while haphazard and bloody, would be a better bet.

But before you immediately castrate yourself in an enviro-moral fervor, it’s important to consider a few things. Should one take VHEMT seriously? Are they actually serious about this? (They are.) Despite their claims that the human desire for reproduction is culturally enforced and that the only relevant instinct here is a genital-based, pair-bonding ritual, VHEMT admits that “we’ll never see the day there are no human beings on the planet. Ours is a long-range goal.”

There are countless other considerations: the central role of reproduction in upholding patriarchy all around the world or the actual practicalities and consequences of voluntary extinction, for example. Also — does this imply that we ought to feel guilty about existing?

In short, upgrading your light bulbs will not resuscitate the drowning polar bears. Undertaking a DIY vasectomy, while haphazard and bloody, would be a better bet.

I would argue that to some extent we already do and have been, long before Al Gore emerged to teach us about the environment. VHEMT points out that their idea of a humanless world is ancient. Abrahamic religions and Sumerian mythology both contain narratives of floods, sent by disapproving gods to smite humanity; the same goes for Hindu and Greek gods. Which is to say, we’ve always been into this sort of thing. At some level, this represents humanity’s deep awareness of the amount of harm we cause, whether to ourselves, other creatures or divine law — depending on how you view it.

I think that, on some mental level, correctly or incorrectly, we all believe that the earth and its other inhabitants would be better off without us providing company. If nothing else, that ought to convince one to seriously consider the ethics of the environmental baggage that comes with existence and consumption and thus, to consider the VHEMT proposition seriously.

VHEMT may be full of crazy people; at first glance, they certainly strike one as absurd.

But the breeders of the West, whose cultures are constructed around the justification of global inequality and gross injustice, are something worse than crazy and absurd. Ironically, voluntary human extinction, as proposed by these concerningly enthusiastic undertakers, may be the most humane resolution to this pickle we find ourselves in.

In a historical sense, though, it would be singularly inhumane; such a collective act of selflessness and courage has not yet been witnessed.

Raveen Sivashanker does not expect you to immediately relinquish your reproductive capabilities. Give it some thought, and replace your light bulbs in the meantime.