The Daily Nexus
News
“It almost felt like everyone had won the world cup, in that way”: U.S. Women’s Soccer Stars Speak on Success at Arlington Theater
October 17, 2019 at 12:07 am by Holly Rusch

Megan Rapinoe and Alex Morgan, co-captains of the women’s national soccer team, spoke to a sold-out crowd at the Arlington Theatre on Tuesday evening about their 2019 World Cup win, the fight for equal pay and their personal paths to success. 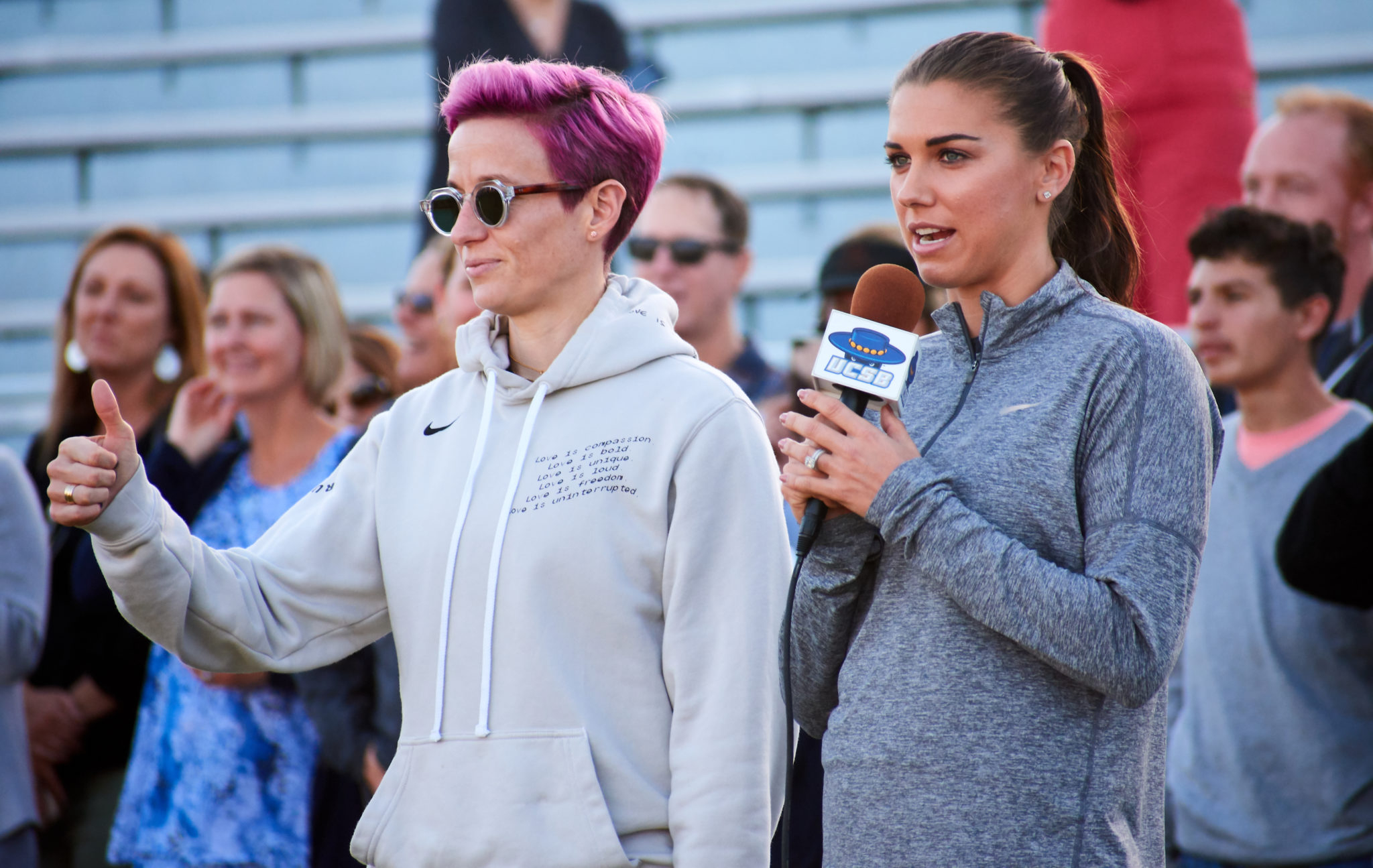 Rapinoe and Morgan spoke about their experiences on the women’s national soccer team. Ida Kazerani/Daily Nexus

Earlier in the evening, Rapinoe led a soccer clinic for over 200 girls, aged 8 to 18, with the help of the UC Santa Barbara women’s soccer team. Many of those same young girls could be seen at the theatre later in the night sporting Rapinoe and Morgan jerseys, excitedly lined up to ask the soccer superstars a question during the Q&A portion of the event.

“It’s weird seeing her in person and not on my phone screen,” Reese Termond, a 17-year-old who attended the soccer clinic, said after seeing Rapinoe. “She’s actually human and not a robot that dribbles through people and scores goals.”

Both on and off the field, Rapinoe was relaxed, personably cracking jokes as she gave advice and answered questions. Morgan was unable to assist at the clinic due to a knee injury but came later to the event to speak to the younger players, urging them to believe in themselves and their abilities.

“Did I think that this would actually happen? I’m not sure. But I had the dream when I was 7, my mom believed in me, my family believed in me and that encouragement helped me become who I am today,” Morgan said after being asked by a player at the clinic if she always believed she would play professional soccer.

Morgan and Rapinoe’s personal and professional growth was also discussed in-depth at their evening talk. Moderator Catherine Remak, from the radio station K-LITE, brought up their experiences playing high school and college soccer; Rapinoe played for the University of Portland and Morgan for UC Berkeley.

Rapinoe joked about her experiences getting “walloped” as a high school player who was “never on a winning team.” But she admitted that the experience of losing led to growth, stating how “even at this level, we’ve had some really tough losses in our career and you can’t let that define you.”

Both captains discussed some of the difficult defeats they’ve endured, referencing their loss to Japan at the 2011 FIFA World Cup on a penalty shootout in overtime as an example.

“You don’t go to the finals to lose,” Morgan stated in response to a question. “We did that in 2011, and we’re not gonna do it again.”

But the players were also happy to discuss their victories, explaining the feeling of winning a World Cup as almost indescribable.

“I mean, you can’t really put it into words … it’s what you work for your entire life, and afterwards you just want to dance ridiculous moves like this,” Morgan said at the girls’ soccer clinic as Rapinoe began to dance, showing off popular moves to audience laughter and applause.

The two also discussed being a part of what is referred to as the best women’s soccer team in history.

“This is the most competitive international soccer has ever been, so the fact that we’re able to stay on top says a lot,” Morgan added.

The U.S. Women’s national team has won back-to-back World Cups, bringing home the trophy in both 2015 and 2019. However, the spotlight on the 2019 World Cup win served as a platform for social justice, with members of the team outspokenly campaigning for gender-equal pay and respect.

When an audience member asked Rapinoe how she dealt with haters, she laughed and mimed covering her eyes.

“Block it out,” she stated matter-of-factly. “But honestly, some of the hate we receive, it’s like ‘Get back in the kitchen!’ and why should I even read that or dignify it with a response?”

Remak also asked the pair about their pending lawsuit against their employers, the U.S. Soccer Federation. The suit claims “institutionalized gender discrimination,” claiming the team’s pay, funding and working conditions are all unfairly inferior compared to the men’s team. The trial date for the suit is set for May 5, 2020, only 11 weeks before the 2020 Olympic opening match.

“A lawsuit is never a fun thing to be a part of,” Morgan said. “But we’re glad to have an ending date in place.”

“A big part of our lawsuit and fight in general is equality across the board … the salary is obviously a big part of it, but we can’t really have that conversation until … everything it takes to run this operation is equal,” Rapinoe said. “That’s why we still see the gap between men’s and women’s sports … if we had the equal investment, we would have the opportunity to be as successful, draw as much viewership and make as much money as the men.”

Rapinoe also discussed her wish for the men’s and women’s teams to be able to band together for equal pay and rights, rather than be pitted against one another.

“We’re both the labor force of the employer. I always feel like they want us to have this us-against-them mentality, when we should both be pushing for a better wage,” she said.

Rapinoe and Morgan also discussed the upcoming 2020 Olympics, which begin only 10 months from now. The team is also looking for a new coach, as their previous coach, Jill Ellis, recently resigned after five years with the team.

“It’s hard, because basically all we did under Jill was win,” Rapinoe said. “So the new coach will have some very big shoes to fill, in a very short amount of time.”

UCSB women’s soccer player Lauryn Payne assisted girls at the clinic alongside Rapinoe and Morgan and attended the speaking event later on.  She was excited to see the impact that Rapinoe and Morgan might have on young girls attending their events.

“They’re gonna see them in the flesh and think that, ‘I can be that one day.’ They’re gonna see someone so high up in the rankings standing right in front of them and be like, ‘Wow, she came to watch me play. I could be her someday,’” Payne said.

Both captains are acutely aware of the effect their win and recent rise into the spotlight are having on fans young and old alike.

“It was pretty incredible coming back from the World Cup this time … it was so apparent immediately that we had transcended the sport in a whole different way. This wasn’t people just excited about us winning the World Cup; they’re like, ‘you’ve almost changed the world and captured how a lot of people are feeling,’” Rapinoe said.

“It almost felt like everyone had won the World Cup, in that way.”