The Daily Nexus
Virtual Reality
The Fault in Our Star Signs
October 17, 2019 at 4:29 am by Pei Ja Anderson 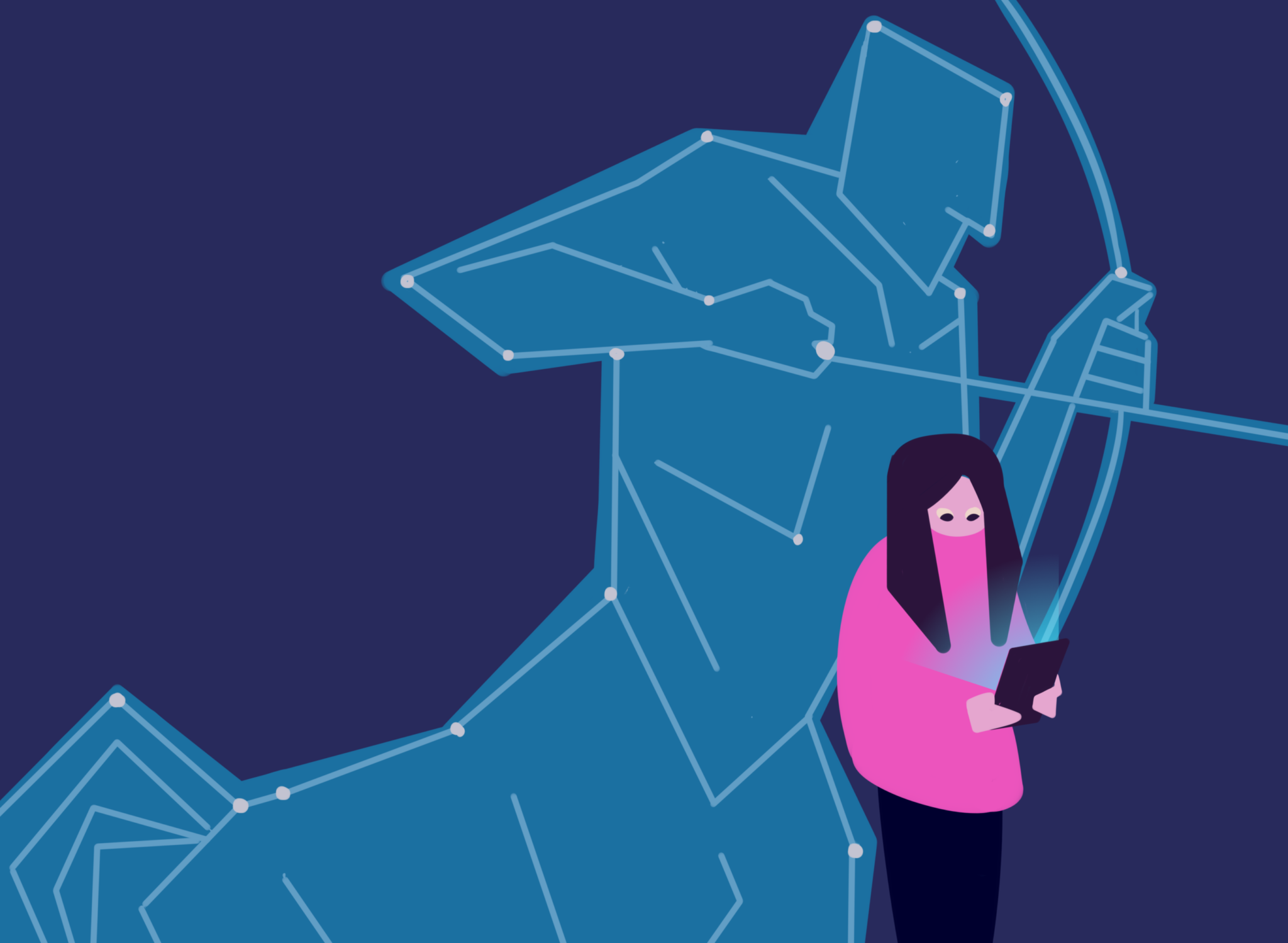 Thanks to the popularity of the well-known app, Co-Star, astrology is more prominent than ever this year. From Twitter accounts dedicated to posting daily horoscopes with half a million followers to Instagram pages that relate the signs to viral memes, astrology has long since graduated from the back pages of printed newspapers and taken on a life — and cult following — of its own. From Urban Outfitters graphic tees to dating apps, it has infiltrated nearly all domains of social life — I recently came across a Tinder bio that read, “Add me on Co-Star.” It seems as though the astrology obsession has become a cultural norm.

In the initial weeks after I downloaded the app, I let the daily horoscope notifications pile up. I dismissed them as corny platitudes (“Drastic times call for drastic measures” or “You can give them a chance today”) and eventually let them get lost in the mix of breaking news headlines and Facebook event notifications.

And then suddenly, the stars aligned and my horoscope started to get it absolutely right — almost disturbingly so. On the day Co-Star sent me, “If you want people to communicate with your heart, you have to teach them the language it speaks in,” my sister and I had just resolved a week-long fight. When I received, “It’s time to grow past your fundamental injuries from when your primary caregivers failed to understand you,” it reminded me to stop wallowing and pull my head out of my ass.

Instantly, I was hooked. I gave myself to the trusting hands of the cosmos. Doubts of “this is literally just a company who pays people to write these” and “it’s all about perception” got squashed by the immediate rush of validation and satisfaction I got from reading and confirming for the first time what a true Sagittarius I apparently was: headstrong, stubborn and spontaneous to a fault.

I started to live for the eerie sense that an inanimate entity (a fucking app) knew me better than I knew myself. That I didn’t need unique passions or interests because everybody seemed to already have their own ideas of who a Sagittarius was. It was more comforting than I cared to admit.

Every day, I would screenshot my horoscope and send it my friends, exclaiming, “That’s so me!” while hundreds of thousands of other Co-Star users did the same thing, claiming the generic platitude as their own. Still, it would give me an extra boost of confidence that would stay with me throughout the day.

I started to live for the eerie sense that an inanimate entity (a fucking app) knew me better than I knew myself.

Co-Star allows you to lean into a list of traits that the Internet says makes you a “total Virgo” and base your identity, quirks and strengths on a personality that has already been curated for you. For a time, it made being 20 seem simple. These accurate (or what coincidentally happened to be accurate) horoscopes gave me a sense of control over my life.

Astrology provided security because it was a way of creating order in an orderless world. It asserts itself as a philosophy without room for doubt and provides a self-assured confidence that is extremely attractive. The 12 sun signs — based on birth month — are taken not as suggestions or fortunes, but as permanent and reliable fixtures in our society, each with their own set of “individualized” principles.

I stopped being a die-hard believer in astrology when I started to notice discrepancies between myself and what my sign was supposed to be. Sagittariuses are generous, idealistic, extroverted, cursed with an insatiable case of wanderlust and truth-seeking. They are “independent and strong-willed,” “natural born leaders,” “seductive” and “trailblazing.”

These are wildly broad claims that feel more descriptive of a video game character than a real person. I don’t know anyone, let alone myself, who embodies all of these statements.

But there’s a defense for these blanket statements: the generalized qualities of the sun signs only scratch the surface of astrology. Apparently, your moon sign explains it all. And to figure out your moon sign you need to know what time you were born.

I don’t know what time I was born because I’m adopted, so I tried to deduce my moon sign by process of elimination. Each day, I read the horoscopes of all the moon signs and took note on which felt the most accurate. By the end of my two-week trial, 168 horoscopes later, I came to the conclusion that a Gemini moon seemed a likely fit.

At the end of this pseudo-experiment, I discovered I still had the same nagging feeling of incompleteness that I had when I first started. I didn’t feel a loyalty to any of the signs and was even beginning to doubt whether my Sagittarius-ness held any value. The fact that a Leo moon tended to gravitate to the spotlight more than a Cancer felt like arbitrary information, even silly. I didn’t possess the authority to claim I belonged to one over the other because I still didn’t have anything to prove it.

I’d spent too much of my time and energy in the world of astrology to come out feeling just as confused as I had at the beginning. It felt like I was promised clarity on the condition that I figured out my birth time, and only then would I be able to access this wealth of knowledge about myself.

Astrology provided security because it was a way of creating order in an orderless world.

A part of me knew that it wouldn’t have mattered anyway. This piece of myself I’d attached so much value to and made myself feel guilty for not knowing was trivial. What was more revealing than anything was how far I had let myself spiral into an astrology obsession.

My faith was based on insecurity. I wanted (and still want) to fast-forward through my bumbling 20s and college years to this fully developed version of myself that doesn’t exist. I wanted it to be as easy as picking an avatar in a game, complete with attractive, likeable traits I didn’t have to work for or even think about.

I thought I could use astrology as a cure-all for my doubts and anxieties about the future. For reconciling the contradictions in my personality, justifying habits of self-sabotage, for not feeling like I was not 100% any one quality. Surely one day I would develop into the full-blown Sagittarius I was if I just believed a little more.

Believe me, I tried. I based entire relationships on whether our signs were compatible or not. Even worse, I judged other people for not believing in it too, this dogma based on fear and escapism posing as cute personality traits and trendy finger tattoos.

At the beginning of this summer, I realized I was cheating myself. I had avoided engaging and actually thinking about my choices and beliefs for an embarrassingly long time. Where I had once felt confident claiming all the ways I was “such a Sagittarius,” this persona began to feel meaningless.

Little by little, I am learning how to relinquish my grip on astrology. The staff astrologer at Broadly, Annabel Gat, puts it simply: “It’s a tool for self-reflection, it’s not a religion or a science. It’s just a way to look at the world and a way to think about things.”

I realize that for most people, astrology doesn’t evolve into this type of unhealthy obsession and codependency. But I do question the underlying and often subconscious motivations of its young target audience. I do question its ability to influence its followers into a kind of group-think that poses as innocent, harmless fun.

Buying into astrology meant being content living my life like a game of Sims on autopilot. A choose-your-own-adventure, but even lazier because someone else had already chosen all the adventures for me. And that’s what astrology became for me: a way to escape my own life by stepping into an already-lived one.