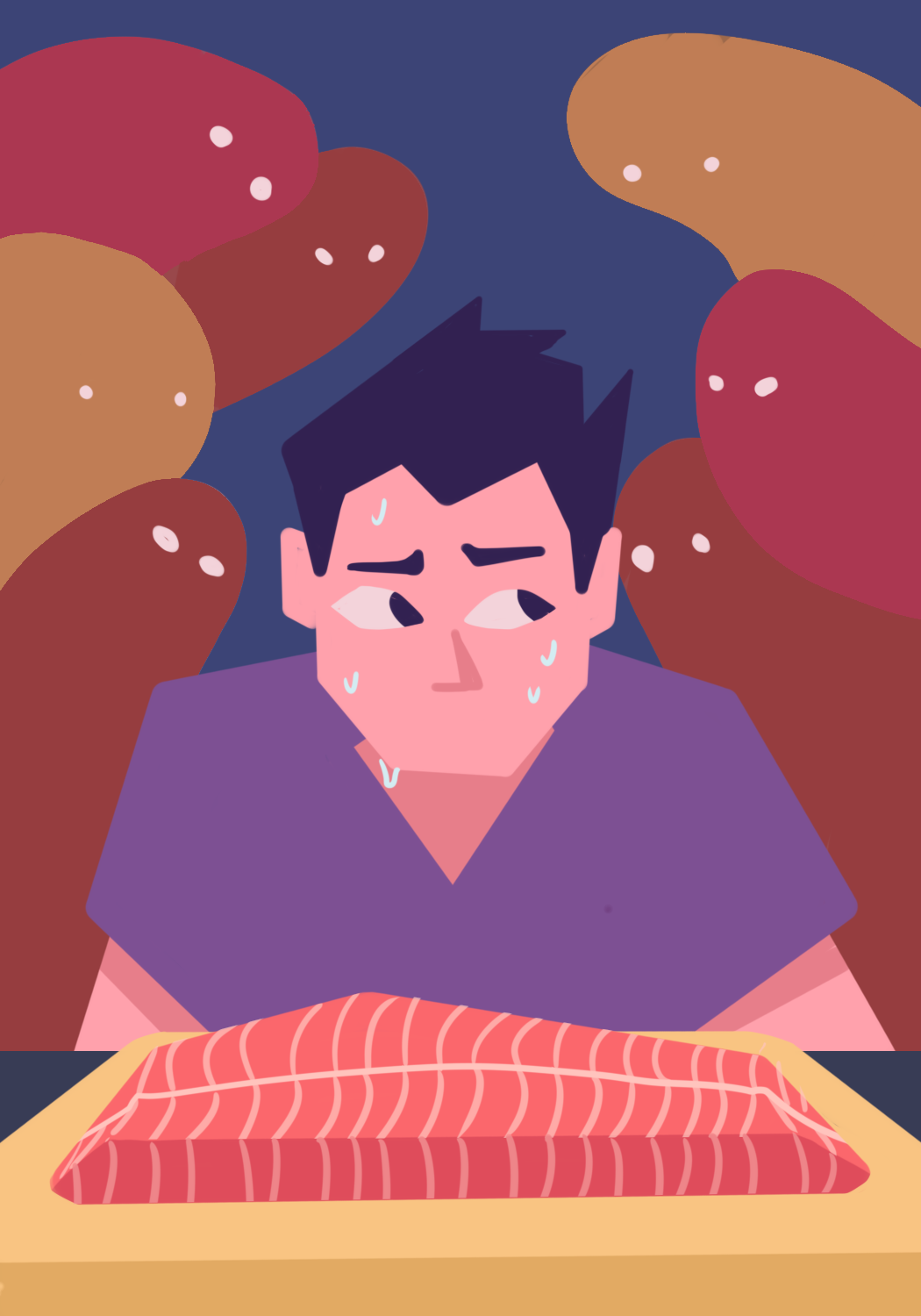 It doesn’t take a biology major to recognize a major biohazard. Common sense? Definitely. Two eyes and a brain? Probably. Heck, you could even use your sense of smell. So I can’t help but wonder just how my four housemates — who share between them eight eyes, four big brains, a couple of noses and early pass times as honors students — so consistently attempt to poison themselves!

You would think it’s obvious that when your fish has been defrosting in the sun for the last 11 hours, it’s become less salmon and more salmonella. It’s common knowledge that you should slow roast your chicken breast for more than five whole minutes or that ground beef that’s been in the fridge for the last week and a half is ground zero for an E. coli outbreak. Before I moved in last week, I never thought my life would be endangered by a half-cooked dead animal. Unfortunately, my housemates perfectly demonstrate the distinction between having a brain and using it.

One evening, I come home tired, cold and hungry and find that my roommate has been cooking, and he’s saved some for me!

“Here’s a chicken leg and rice,” he says.

“Why thank you,” I respond: And, in a moment of weakness, I almost take a bite — before I remember that this is the same chicken I saw several centuries ago festering away on the countertop, sitting in its own private lake of bloody water. Now, if my housemates want to contract salmonella on a daily basis they’re more than welcome to do so. But when they make such a vile and heinous attempt on my life by feeding me undercooked and over-defrosted chicken, things have gone one bloody hunk of meat too far. After this traumatic incident I seriously wondered why no one in the house wanted my sound advice on how not to intentionally ingest health-endangering compounds.

I decided the best course of action would be to methodically and scientifically determine what made my housemates the brilliant idiots they are. After a week of observations, several assorted nonviolent confrontations, a few major squabbles and the odd barely averted tragedy or two, I came to the conclusion that the only things any of my housemates really have in common is that they are Asian men. Now, being the brilliant scientist that I am, I deduced that since all five of us are Asian and male — and all of us are idiots — being Asian and male must be contributing to this idiocy.

See, the main problem for us Asians in admitting error is that, traditionally, a single mistake is enough to disgrace your family for the next eon or two. The contrary is also true: Every Asian family has at least one deity-ancestor who lived when dinosaurs were the primary mode of transportation. Despite having lived so long ago, we know today as a scientific certainty that this particular ancestor was half-dragon, half-tiger and held off 346 invading Huns on his own — not to mention that he was the chief counselor of the Chinese emperor and commander of the imperial fleet and army at the same time. As such, any ancestor of lesser import is quickly forgotten by the annals of time, ostensibly because no one wants to hear the epic saga of Uncle Li who moved to America against his family’s wishes, caused irreparable harm to the family name and opened a chow mein stand in Brooklyn. In the same vein, no Asian wants to be forever remembered as that one disgrace to the family by getting straight A’s and a Ph.D. but not even being able to cook. Admission of error — never. Error in itself is a disgrace to the family name.

After a week of observations, several assorted nonviolent confrontations, a few major squabbles and the odd barely averted tragedy or two, I came to the conclusion that the only things any of my housemates really have in common is that they are Asian men.

Asking for help has more practical repercussions as well: The problem with asking a family member for help in an Asian circle is that, at most, within the next three to five business days, everyone you have ever met in your life, along with all their friends, coworkers and deceased aunt’s stepfather’s rottweilers, will know all about how Ling Ling tried to make miso soup in a frying pan. You will never redeem yourself and you will never catch a break. Every time someone so much as takes out a frying pan, aunt whatever-her-name-was will take it as a mandate to recount the events of Ling Ling’s frying pan miso soup.

This is even more true for Asian males. As the head of the traditional Asian household, us males are expected to be entirely correct all the time. Facts to the contrary? Invented by insubordinate and disrespectful outcasts who have no respect for true family. Good advice? It’s no good if I don’t agree with it. Three minutes too short to grill a side of pork? Nonsense! I’ll eat it myself just to prove how safe it is.

One superb example can be seen on bike paths where one particularly dashing and adventuresome international student will courageously lead the way onto the path by foot, presumably demonstrating to others in his posse how healthful and efficient such a practice can be. Then, upon his narrowly avoiding permanent brain damage by bike, it takes a good 15 minutes of shouting to dislodge our explorer from his notion that bike paths were intended to be traversed on foot. Much annoyance could be prevented through the use of eyes and common sense.

As an Asian male myself, I have to admit that I share some of these tendencies. I can’t remember a single time growing up that I was ever wrong or mistaken. No, not the time I was five and thought that yellowish stuff in a brown bottle was apple juice. No, not after I got roaring drunk on it and replaced all the holes in Mr. Potato Head with crayons. Especially not after my parents whooped my ass for drinking beer.

No, your parents will not disown you because you couldn’t self-study Chemistry 1A. No, your teachers won’t roast you for coming in during office hours. Yes, there may be slight discomfort upon admitting you need help in chemistry, or that you’ve never cooked chicken, or your obituary nearly listed death by cyclist. But take it from someone who’s had food poisoning — that slight discomfort is still way better than the alternative.

So to all the guys out there: You have two heads, the big one and the small one. The small one isn’t nearly as big as you think it is, so do yourself a favor and use the big one instead. Don’t be afraid to admit you’re wrong because one head of the household is enough. Cram five heads into one tight apartment in Isla Vista and you have a literal sausage fest.

Sam Suh recommends that, in the event of a sausage fest, fry them for at least six to eight minutes.

Sam Suh
Sam Suh is an opinion staff writer. When he's not asleep he's not in class.

WE CANT BE SILENCED