With the future of electronics potentially heading toward quantum technology, UCSB secures its place at the forefront of this emerging field with its new Quantum Foundry.

The National Science Foundation (NSF) has granted UCSB $25 million over six years to advance the “discovery and control of materials that support protected quantum states with unprecedented coherence and scalable entanglement,” the Quantum Foundry’s website states. The center will be located in Elings Hall within the California NanoSystems Institute (CNSI).

With classical technology seemingly having reached many of its limits, researchers are increasingly exploring quantum computing.

“What’s next for electronics is maybe you can make computers for certain applications that can be more powerful by switching the mode of computation from classical computation to quantum computation. There’s games that can be had if you can build quantum computers,” Stephen Wilson, co-director of the Quantum Foundry and an associate professor in the Materials Department, said.

But pursuing this “new frontier” will provide challenges as progress is still at a “basic research level” with no general consensus on what types of materials or designs and architecture are recommended to utilize and manipulate quantum information, according to Wilson.

Through three research thrusts, the Foundry will attempt to address these limitations — namely to suppress decoherence, in which once quantum states of materials interact with the environment, quantum phenomena is decohered and will appear to behave classically.

The first research thrust proposes to characterize materials with “highly entangled many-body states and protected coherence,” according to the website. The second thrust aims to create and control protected quantum states in hybrid materials so that quantum information can be generated within the materials and have native decoherence protection from the environment. The third thrust will engineer material platforms that host localized quantum states with robust coherence to “basically encode quantum information that is protected from decohering natively…called a natively entangled state,” Wilson detailed.

Efforts to realize these goals will involve researchers from multiple departments and disciplinaries, fostering a collaborative environment.

“Suppressing decoherence is a challenge, and a challenge that involves a lot of materials work, a lot of physics, a lot of chemistry — sort of a very multi-pronged effort to be able to battle decoherence and actually realize quantum phenomena in useful ways,” Ania Bleszynski Jayich, co-director of the Foundry and an associate professor in the Department of Physics, said.

Added Wilson, “That ends up being a very interdisciplinary thing, trying to weave together engineering aspects, the quantum information science and obviously the core physics of quantum information science, but also having other fields where you have different perspectives like chemistry involved. And also getting electrical engineering and materials industry [involved].”

The Foundry’s work will include a significant data science component as well. “We’re getting data science students involved with the quantum researchers and quantum mechanics, just sort of understanding how does one take data and curate data in such a way to make it accessible to data scientists and vice versa,” Bleszynski Jayich said. 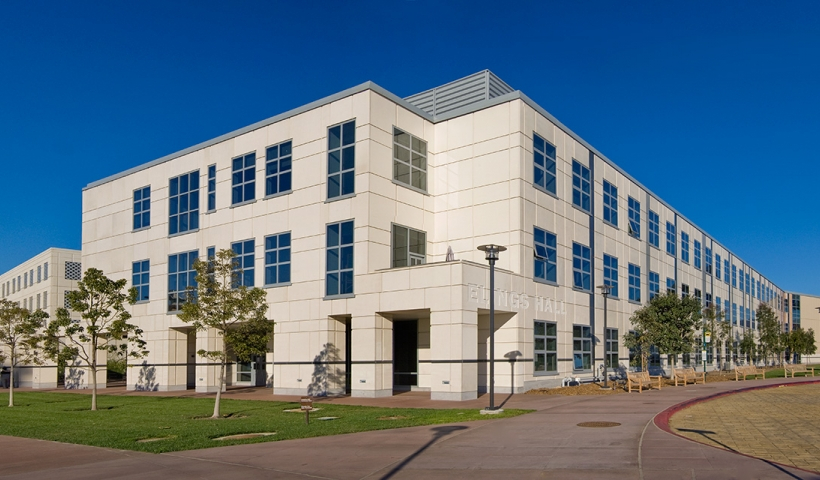 The Quantum Foundry, dedicated to engineering and characterizing materials with protected quantum coherence and entanglement, will be located in Elings Hall within the California NanoSystems Institute (CNSI). / Courtesy of the CNSI

The NSF grant will be largely used for equipment and infrastructure to synthesize and characterize these mostly not-yet-existing materials that exhibit quantum phenomena. The equipment will be “all multi-user…very much in the spirit of how UCSB does things,” Bleszynski Jayich said.

One pillar of the Foundry is to have industry partnerships to “interact and intertwine industry and academic research in the space,” according to Wilson.

With a deep technology connection in terms of industry funding and encouraging entrepreneurship on campus and in Santa Barbara, UCSB boasts strong industry partnerships that made it an ideal candidate to host the Quantum Foundry.

10 industry partners that have signed on will utilize the center to explore applications in the quantum information field. “Because these are really state-of-the-art equipment that can benefit a lot of people,” Bleszynski Jayich said.

The Foundry intends to “facilitate this broader national network [and try] to lead a coalition of partners,” Wilson described. This includes research partners at other universities, in national labs, in industry and partners like other federal agencies to “collectively push forward” in this field.

Education will also be a large focus of the Foundry.

The NSF funding will support workshops that can bring industry and academic partners together and a visiting lecture series granting a broad quantum education, according to Bleszynski Jayich. This is in addition to new graduate courses that will be offered year-round in various departments, including physics, materials and chemistry. These classes will focus on quantum science and mechanics, but also specifically provide a practical quantum education.

The Foundry plans to have lab classes with curriculum focused beyond the theory of quantum mechanics, to investigate its realized implementations and tackle preventing decoherence.  “In practice, how does one actually design and build and control quantum systems in order to be able to use them and maintain their quantum property? So that’s a challenge that’s really cutting-edge research, but that is to the point where we can now start beginning to introduce that in lab classes,” Bleszynski Jayich said.

She expects undergraduate students will take advantage of these courses as well. “There are a lot of undergraduates out there hungry for quantum education because they really are excited by the new phenomena and the very fascinating phenomena that they learned in quantum mechanics. And they also see that there’s really a market for that, too.”

Having numerous industry and academic partners signed onto the Foundry will offer plenty of opportunities for trained students to contribute and make progress in this growing field. These may involve industry internships and externships, as well as “ample opportunities for undergraduates to get involved in research. Which, there’s a huge appetite for already,” Bleszynski Jayich said.

In retrospect, Bleszynski Jayich says UCSB was “an obvious choice” to be selected to host the Quantum Foundry with its reputable physics department — the largest in the nation with over 700 undergraduates — in addition to its strong materials, electrical engineering and computer engineering departments.

“Not only are we strong in those areas, but we work together already. And people know that very well. UCSB is known for its collaborative nature. And that’s sort of necessary to address these very difficult problems that have to be solved in order to bring sort of quantum technologies to fruition,” she stated.

As co-directors, Bleszynski Jayich and Wilson will manage the Foundry, ensuring that the numerous research, education, industry and networking aspects run smoothly in an interconnected way.

“We’re excited about getting started. I think it’ll be fun. It’ll be a really exciting effort on campus,” Wilson said.

Bleszynski Jayich emphasized that they’ve gotten to where they are with much support from “really good role models” on campus, who have contributed significantly. Additionally, she stated that the process to establish the Foundry at UCSB has showed her how “supportive” the community is and what “fantastic scientists” are on campus.

“It’s pretty amazing to see that in action at UCSB. And that whole process has made me proud to be at UCSB for that reason, and makes me want to continue that tradition. Hopefully, we can continue to do that in this project.”