The Daily Nexus
Sign of the Times
The Puerto Rican Protests: A Lesson in Democracy
October 3, 2019 at 8:00 am by Nina Nazario

After massive protests, Puerto Rico’s Governor Ricky Rosselló had finally announced his resignation on Thursday, July 24 at midnight. The activist demonstrations were a response to his scandal involving his private text messages that had been released to the public. The “chat-leak” totaled to more than 800 pages riddled with offensive dialogue between fellow board members and lobbyists. Some notable remarks include calling the democratic politician and former speaker of New York City Council, Melissa Mark-Viverito a “whore,” joking about shooting Rosselló’s political “opposer” and mayor of San Juan, Carmen Yulín Cruz, and most shockingly, the mocking of dead bodies that have “piled up” since Hurricane Maria. 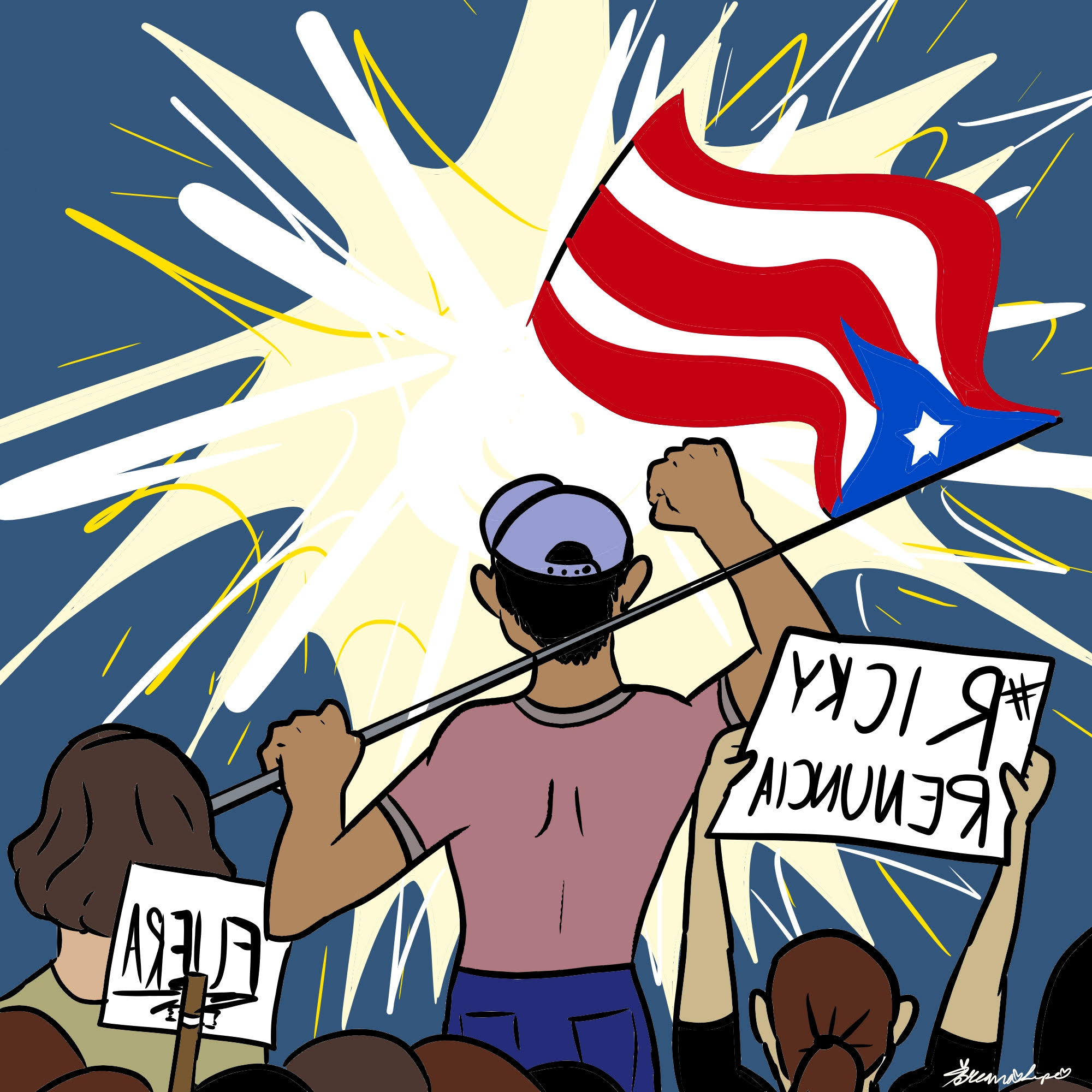 Nearly half a million people took to the streets for two whole weeks to express their shared outrage. But this rage has been building up for several decades. Puerto Rico has been drowning in the government’s debt. Back in 2016, the United States Congress passed the Puerto Rice Oversight, Management and Economic Stability Act (PROMESA), which allowed Puerto Rico to declare a form of bankruptcy; today that debt has grown to $129.2 billion dollars. In 2017, the tragedy of Hurricane Maria exacerbated all of the island’s existing problems. As many protestors in the demonstration expressed, the culmination of crisis made Rosselló’s scandal seem like the last straw on the camel’s back.

Those who were unaffected by Hurricane Maria are for the most part unaware of the destroyed state the island is still in. Since the storm, the island has been struggling to return electricity to people’s homes, provide clean water and rebuild damaged infrastructure. As many mainlanders have heard, basic needs are still not being met. Last time I spoke to my abuelo, he said islanders living in remote areas still don’t have access to clean drinking water since the storm. After the hurricane, my family on the mainland had to wait six months to hear from our relatives on the island. When we finally heard back from my abuelo, he told us that the family farm (which my Puerto Rican family relies on for food and income) was destroyed and that all the animals were gone. He showed little worry despite the destruction, even calling himself a “lucky one” for surviving the storm with his brother, sister, nephew and three-year-old granddaughter by his side. Unfortunately, many others on the island have not been so lucky.

The perception of Puerto Rico’s crisis has only been worsened by Trump’s tweets and numerical claims in regards to the hurricane and debt. At first, Puerto Rico’s government inaccurately reported 64 deaths; after backlash from the community, who noted nearly 3,000 deaths, the number was corrected. However, Trump denies the number is correct and claims the jump in deaths was something of “magic.” Trump also falsely tweeted that the Puerto Rican government had “foolishly” received $92 billion dollars in relief aid. In reality, $92 billion dollars is the estimated cost for what the island would need to be fully restored. Even so, Congress cut that number in half, declaring in courts that the Puerto Rican government will receive $42.5 billion in aid. However, almost three years have passed and only $14 billion has been received, which many people have accused Rosselló of mismanaging.

An example of Rosselló’s mismanagement, and one of the most tragic public spending cuts the island has ever seen, was the permanent shutdown of one quarter of Puerto Rico’s public schools last June. This decision was made by Julia Keleher, the Secretary of Education appointed by Rosselló. In total, 254 schools have been closed indefinitely, which has displaced 60,000 K-12 students. Moreover, many of the school closures have affected remote areas where local communities rely heavily on public schools to unify children, parents and teachers to foster a constructive upbringing for disadvantaged children. Keleher stood by her decision, claiming, “We saw in the redesign as a unique opportunity to improve the system in an inclusive, respectful and sensitive way.” One Facebook comment in response sums up the community’s feelings about school shutdowns: “No to the closing of schools. If they want to save money, then reduce the salary for themselves and stop playing with the children’s education.” What’s worse is that the school closures have disproportionately affected children living in low-income communities who were hit hardest by the hurricane.

“No to the closing of schools. If they want to save money, then reduce the salary for themselves and stop playing with the children’s education.”

At any rate, there are many complex issues to be dealt with on the island. At times, it’s difficult to imagine transformative change, especially considering the government’s overwhelming debt. However, after the resignation of Rosselló, optimism is at an all-time high. The win of the people sparked massive celebration. I even saw my own father become emotional with relief when he heard the news. He expressed his feelings to me over FaceTime, tearing up: “I’m so happy we got to see this in our shared lifetime. Through everything Puerto Ricans have been through, peaceful protest is able to bring change. It can happen!” I realized my dad was right. These protests were not about reacting to a scandal; they were truly a lesson. They were proof that civic action can foster real change. In any case, they serve as a much needed reminder to Americans that in a democratic state you do not have to settle for leadership you don’t approve of, and you can fight against a system of corruption in a peaceful manner.

Looking forward, many Puerto Ricans are wondering what the future government will look like. And if you weren’t wondering yourself, you should, considering that all of the billions in relief aid being given to Puerto Rico’s government, come directly from the American taxpayers. Unfortunately, the multiple arrests since the scandal have created a hole in Governor Rosselló’s line of succession. Now, Wanda Vázquez Garced is next in line and to assume the position, despite publicly voicing that she did not want the job. The appointment for responsible leadership may still be up in the air for Puerto Ricans, but America and the world should take note of this victory. In a political climate that feels divisive and difficult to change, the little island has given us a huge lesson. It wasn’t just about Rosselló’s scandal —  the Puerto Rican protests were a master class on how to demonstrate your democratic rights.

Nina Nazario believes that the only way people can change politics is by engaging in organization, demonstration and peaceful protests.

Puerto Rican activists have long wanted an independent country. Now is the time to let them have it, along with the overwhelming debt. Stop wasting US taxpayer monies on that welfare state.

First , go and do some research and get real facts before saying something that make you look like an ignorant person. Yes, there is a lot of us who want Puerto Rico to be a free nation which is a right taken by the USA not a colony as in the last 121 years since the USA invasion. About the welfare state let me tell you that we sent billions of dollars each year back to the USA economy so add 121 years and is probably trillions. We dont have anything in common with the americans but the imposed… Read more »

Of course, it is always someone else’s fault.

Have you read any of trump’s attempts (childish) to deflect any and all responsibility?

About the debt the Congress and Wall Street are also responsible, here in Puerto Rico nothing can be done without the Congress approval, they own Puerto Rico. We dont have anything against the good hearted American people but against your corrupt government.

As one with an bachelor’s from UPR Mayaguez, I strongly disagree with you. The commonwealth is a cesspool, largely by it’s own doing.

“We dont have anything against the good hearted American people but against your corrupt government.”