The Daily Nexus
Reviews
Have You Gaucho Mojo Back?
October 3, 2019 at 12:56 am by Winnie Lam and Rachel Lee

Isla Vista’s favorite teahouse is finally back with their grand opening! Not only did Mojo move locations from Trigo Road to Seville Road, but they also changed their name from Mojo Teahouse to Mojo Asian Fusion Cafe. Their transition from a teahouse to a cafe means that they came out with a variety of new food that they didn’t have during their soft opening. The new additions include kimbap, cheese tea and new options for rice bowls. 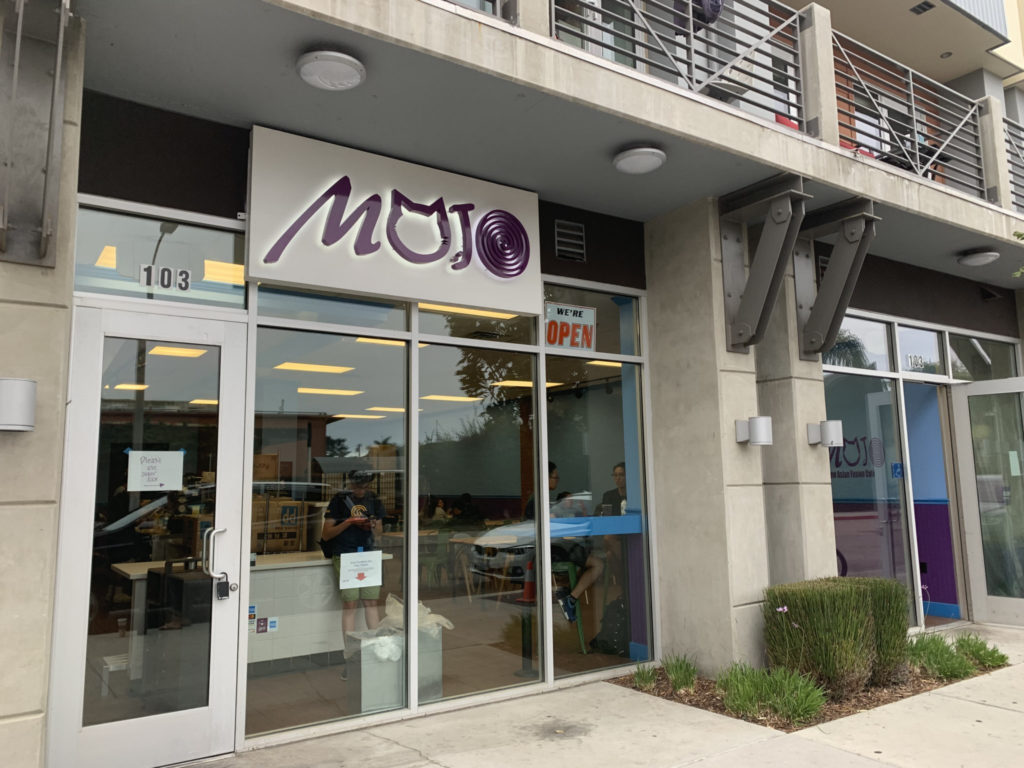 The new Mojo location has all their tables indoors, as opposed to the previous location’s patio, which we kind of missed. Nevertheless, it was definitely nice to order and sit down in a more spacious area because it was always packed inside the old location. We decided to try a half order of The Faker, which is kimbap, a Korean rice roll that was made with imitation crab meat. When we opened the box, we didn’t expect there to be so much sauce on top of the kimbap, as it was drizzled with so much sauce that we could barely see the rolls themselves. The rolls were kind of difficult to eat because they fell apart when we picked them up with a fork, but as for the flavor, it wasn’t too bad. We’re fairly certain that we got tuna kimbap instead of the imitation crab kimbap that we ordered, but it was still pretty tasty and not dissimilar to other kimbaps we’ve eaten in the past. Our only gripe was the excessive amount of sauce that was drizzled across the top, so if you’re not a fan of sauce we’d recommend that you ask for the sauce on the side or just skip out on it altogether. 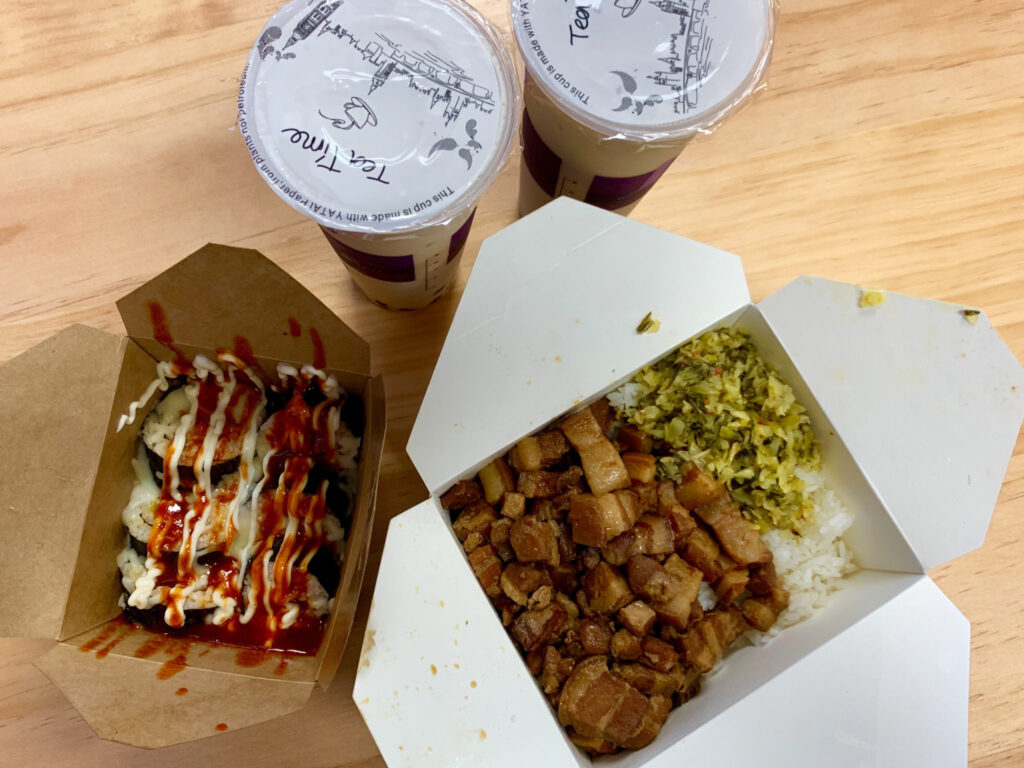 We also wanted to try something they had during their soft opening so that we could compare if anything got better or worse, and we settled on the Pork Belly Bowl. While the kimbap was too saucy, the rice bowl was on the other end of the extreme. Though the braised pork had a nice savory flavor, it was a little too dry for our taste. A quick fix would be to go up to the counter and get yourself some sweet and sour sauce, but we would’ve preferred if they just put more soy sauce on the pork itself. The rice was well-cooked and paired nicely with the pork, but we didn’t enjoy the mustard vegetables on the side. Usually, people don’t like mustard vegetables because of the sour taste, but we have no problem with that. The thing that made the vegetables difficult to eat was that it vaguely tasted like dishwater, so we just ate the pork and rice. 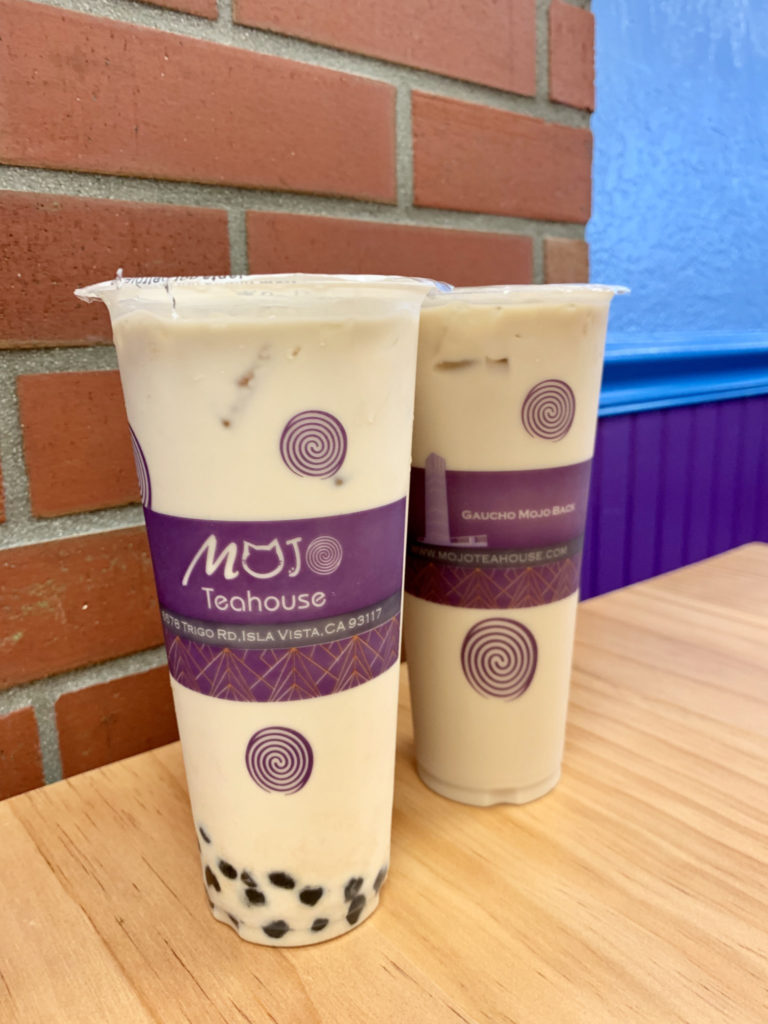 As for drinks, we tried the House Jasmine Green Milk Tea with boba and the House Roasted Oolong Milk Tea. We got the Jasmine Green Milk Tea with 50% sugar and it was still pretty sweet, but that could have been because of the boba. Overall, we thought it had a nice floral jasmine flavor and we could actually taste the tea, which is something I thought was lacking during Mojo’s soft opening, as the drinks back then tasted like they were made with a lot of syrup. We noticed while we were heading out that they had a trash can specifically for their used tea leaves, and we appreciated that we could see that they weren’t skimping out on the quality of their tea. As for the oolong milk tea, the tea flavor wasn’t as distinct as we would’ve liked it. We got it with 30% sugar, and it tasted pretty watered down. It wasn’t too bad, but we were pretty disappointed because oolong is such a staple tea.

Overall, it’s worth your time to try out the beverages at Mojo’s grand opening. As for their food, although it is at a fair price, just keep in mind that some things may be too saucy or too dry, so just make adjustments based on your personal preferences. Unfortunately, their full menu hasn’t come out yet, as we are still waiting on their blended drinks and tapas to arrive at this new location. But until then, definitely stop by Mojo for a quick boba fix!