PKD progression is depicted, with a normal kidney represented on the right side of each diagram for comparison. / Courtesy of Wikimedia Commons

Individuals with PKD can face symptoms such as elevated blood pressure, possible development of cysts in other organs like the liver, higher chances to develop brain aneurysms and kidney stones and chronic side or back pain. Although there is currently no cure for PKD, numerous supportive treatments and lifestyle changes may help control symptoms and slow down or reduce loss of kidney function.

Much research is being done on PKD, including in Thomas Weimbs’ lab at UCSB.

In their paper published in the Journal of Clinical Investigation, the lab members identify a tubule dilation mechanism that may accelerate the formation of kidney cysts.

Based on diet, our metabolism results in the formation of different substances such as calcium phosphate, calcium oxalate and uric acid. Microcrystal versions of these molecules are produced daily and get harmlessly excreted through normal kidney function.

But for individuals with a propensity to form kidney stones, crystal deposits can get lodged in renal tubules. This may lead to kidney stone formation and cause health complications.

“You can imagine that if you’re trying to filter the urine out — and the kidney has a lot of tubes — and if the kidney stones get stuck in any of these tubes, the kidney would stop working. There wouldn’t be any kidney function equivalent to filter any more urine out. So there has to be a way to deal with these little microcrystals before they become stones,” Jacob Torres, a postdoctoral researcher in the Weimbs’ lab and the lead author of the study, said.

The scientists found that in response to calcium oxalate crystal deposition, a protective mechanism is triggered in which renal tubules dilate to flush out these lodged crystals.

While researchers in the natural sciences field studying kidney stones have observed dilated tubules before, “it has not previously been recognized as an active protective mechanism,” the paper states.

The fact that the tubules dilate and how or why the dilation happens hadn’t been thoroughly analyzed until now. The endogenous crystal clearing mechanism was “kind of unlooked at up to this point,” Torres said.

“In a lot of diseases, mTOR is dysregulated because it’s either overactive or underactive. Most of these are overactive diseases like cancer or PKD — that’s when mTOR is doing too much. And that kind of tells cells that they can grow and proliferate,” Torres explained.

The study reports that blocking mTOR signaling diminished tubule dilation and stopped effective crystal excretion. This suggests that these pathways are implicated in ADPKD and renal cyst growth, the investigators wrote. 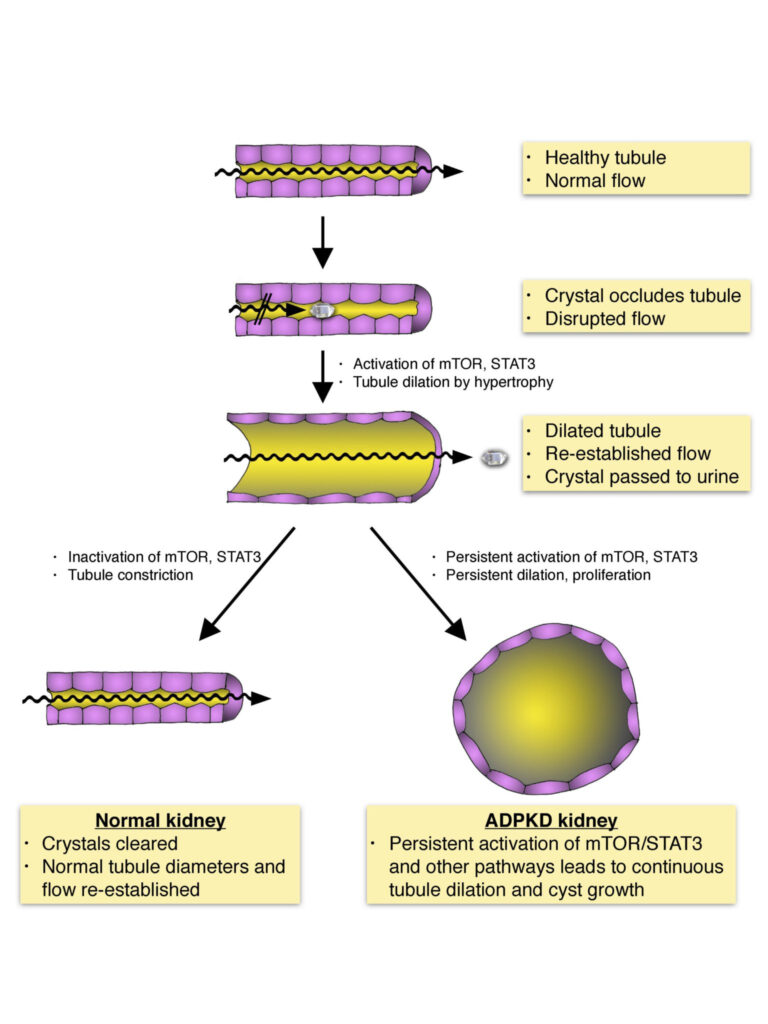 Courtesy of the Journal of Clinical Investigation

Additionally, their results conclude that this protective mechanism can be a “third-hit” trigger accelerating PKD progression through causing dilated tubules to “overshoot” to form cysts.

Reminiscent to the third-hit model in the cancer field, the concept expresses that mutations “accumulate on top of each other” before individual cysts form in ADPKD, Torres described. The first hit occurs when a gene responsible for ADPKD gets mutated, either in PKD1 or PKD2. After several gene mutations and potentially through an environmental stressor, a somatic mutation may occur in a renal tubule cell (the second hit) and cause or continue a disease through a kidney insult, triggering a repair response (the third hit).

“There’s a lot of debate about what kind of sufficient trigger is the cause [of the third hit],” Torres said. “Studies show that now you need to have an injury on top of that second [hit] in order to cause a cyst to form … And so our research is kind of building on that idea that microcrystals are acting as that third hit, the ‘some other injury’ trigger that’s causing the cyst to form.”

The protective mechanism “is probably broken in PKD,” according to Torres. “And then that might be a way to prevent the progressive decline of kidney function by minimizing or mitigating the crystal burden that patients have. So it kind of leads to a therapy or therapeutic approach for individuals that have PKD.”

“A big piece of the puzzle is because PKD is a genetic disease, there’s probably not going to be a silver bullet where people can just take this one thing and it’s going to fix everything. So it’s probably going to be a bunch of behavioral stuff that people are gonna have to do … to make the biggest impact. And because it’s so slowly progressing, people can preserve kidney function or extend it for 10, 20 years. They effectively cure the disease because they don’t need to get a kidney transplant,” Torres stated.

He continued, “That’s another big finding — just being able to put the power in people’s hands rather than them waiting for somebody to find the cure for them. It’s something that they can actually act upon just using some basic science.”

In a joint effort with other individuals involved in the PKD field, Torres worked with different models of polycystic rats and eventually with humans with PKD. He highlights the “interesting” collaborative aspect that “blended all these different fields together to come up with the synthesis for our overall model of how these crystals are triggering this disease.”

Torres is next interested in detailing the different pathways implicated in the mechanism at the cellular and molecular level.

“In the paper, we touched on them a little bit, but we don’t go into full detail. So that would be the next thing, just figuring out what exactly is going on. [We] always want to know a little more, flush the story out a little better.”