As climate change rapidly makes its impact on the world, the existing scientific data monitoring and evaluating what changes are occurring and what impact they have may struggle to keep up.

Due to the sensitive nature of marine ecosystems, the impacts of climate change are far-reaching for marine aquatic life. A fundamental gap in understanding how humanity is affecting the oceans is our limited knowledge about the pace of change in cumulative impacts on ocean ecosystems. What’s more is the need to find out the locations, drivers and patterns of these changes.

Recently, UCSB researchers, including Benjamin Halpern and Melanie Frazier, and a Stanford University researcher, published their paper “Recent pace of change in human impact on the world’s ocean” in Scientific Reports which addressed for the first time the combined impact humans are having on our marine ecosystems.

“To assess the pace of change in cumulative human impacts (CHI) we calculated and mapped the cumulative impact of 14 stressors related to human activities (including climate change, fishing, land-based pressures, and other commercial activities) on 21 different marine ecosystems globally for each of eleven years spanning 2003–2013,” Halpern and Frazier reported in their study.

“We found that most of the ocean (59%) is experiencing significantly increasing cumulative impact, in particular due to climate change but also from fishing, land-based pollution and shipping,” Halpern and Frazier wrote in their groundbreaking study.

These findings beg the question: What aspects of climate change have caused a doubling of impacts on sensitive marine ecosystems like coral reefs and mangroves?

According to Frazier, “increasing greenhouse gas emissions have resulted in large increases in ocean temperature which impact many ocean habitats and animals.” 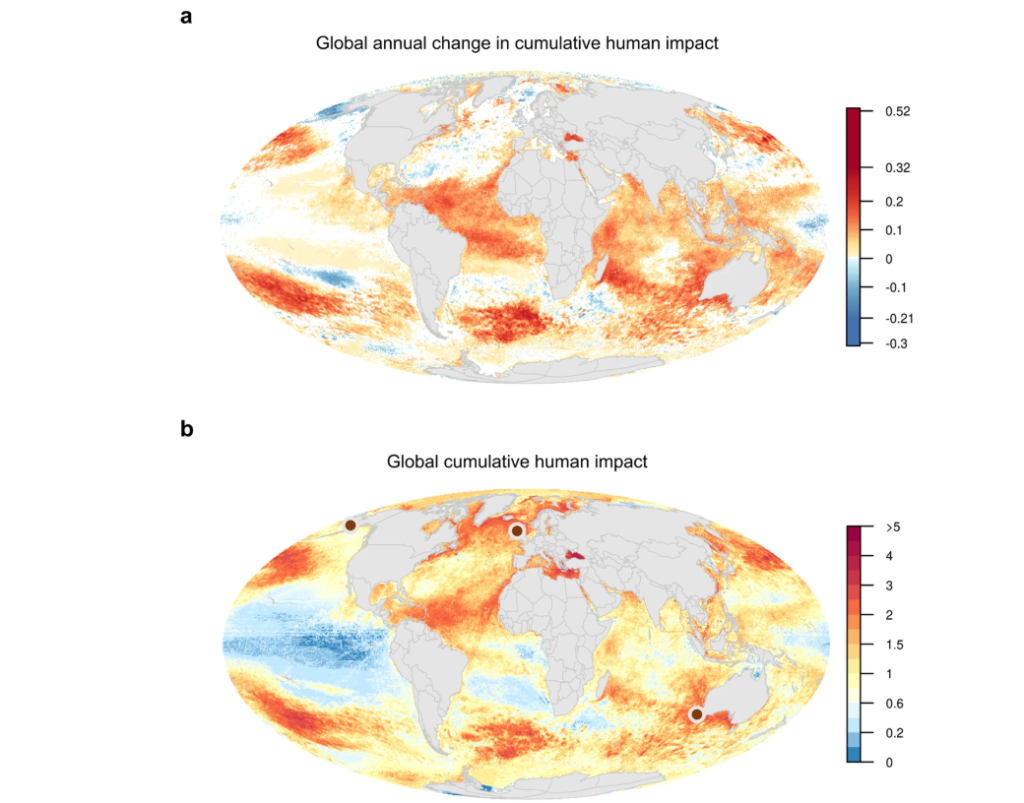 High sea surface temperatures (SST) account for 75% of CHI, making it the largest influencer globally. However, high SSTs along coastal ecosystems only account for 40% of CHI, while increasing sea level explained 41% of the increasing CHI.

“Furthermore, the consequences of increasing temperature are compounded by the resulting loss of sea ice and rising sea levels. In addition to warming, carbon dioxide emissions also cause ocean acidification,” Frazier stated in an email.

In areas with low cumulative impact such as the Indian, Mid-Atlantic and Western Pacific Oceans, increased SST accounted for most of the CHI increase.

Despite the many alarming findings of the study, a handful of countries, including areas of Europe, Asia and parts of Africa, saw declines in the impacts caused by commercial fishing and land-based pollution.

“Some countries were able to stabilize, or even slow, the impact of some of the stressors on their ocean waters. This suggests that good policies can definitely contribute to improved ocean health,” Frazier asserted.

Creating policies is rather hard-pressed in countries where economic and social viability under the current infrastructure is indirectly associated with destroying the environment.

“One of the best actions we could take to slow down our impact on oceans is to reduce greenhouse gas emissions. This is challenging because it requires concerted action among many countries, and the political motivation to achieve this goal is depressingly low in many places,” Frazier said.

“A reduction in carbon dioxide would also help prevent further ocean acidification, which can be damaging to certain ocean animals,” Frazier addressed.

Ocean acidification is one of the largest threats to coral reefs which were among the most affected marine ecosystems along with sea grasses and mangroves.

Greenhouse gases remain one of the largest obstacles to overcome despite the numerous others.

The study detailed that the Paris Agreement would have a tremendous impact on the state of many marine ecosystems and significantly slow or halt the increasing trend of cumulative human impact.

As far as policies go, Halpern elaborated that, “there are a huge number of possibilities, because the different impacts come from almost every sector of human activity, on land and in the sea.  So there are lots of options.”

Nonetheless, there are many variables that are known stressors that the study mentioned it did not include due to difficult data sourcing such as deep sea mining, plastic pollution, offshore energy, aquaculture, noise pollution, terrestrial mining, logging and oil spills.

As far as making a difference as climate change takes its course, Frazier added, “ I (mostly) haven’t lost hope that we can come together to improve the situation.”