The Daily Nexus
Science & Tech
SBWCN: Animal Rescue Stories from the Community
August 27, 2019 at 9:00 am by Emily Komessar

In caring for over 3,000 wild animals annually, the Santa Barbara Wildlife Care Network (SBWCN) keeps a log of each patient: where the animal was found and in what condition, how long it was kept in care,what it was fed and which medications it received. SBWCN also gives rescuers the opportunity to reach out and check in on the animal’s health.

Many wildlife rescues have occurred in Isla Vista. Here are some animal rescue stories from local community members. 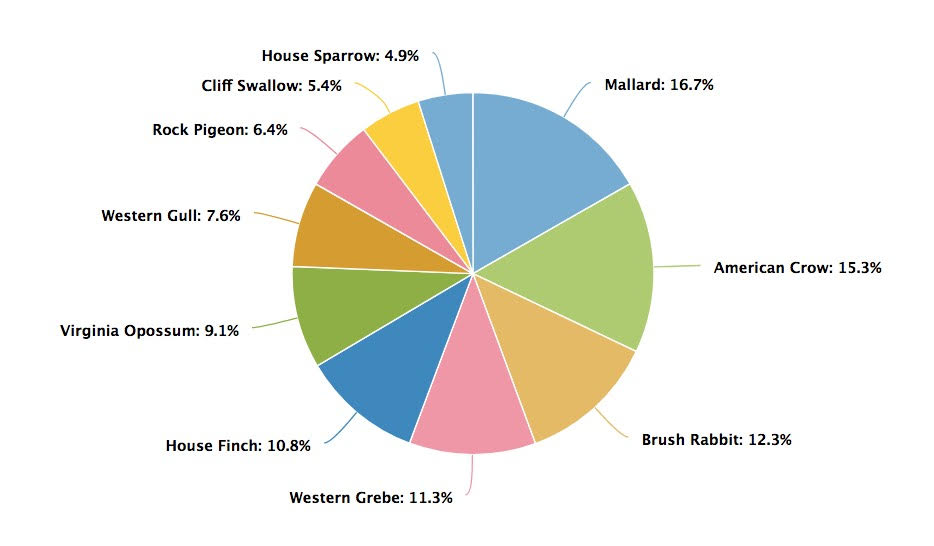 Sarah Cortez, a resident of Isla Vista, brought in a squirrel during the colder rain month of February. She was walking her dog, Ben, who loves sniffing out ground squirrels, along the Del Sol Vernal Pool Reserve. When he hovered over the same spot for a long time, Cortez went to investigate and found a squirrel stiff from being cold.

“The squirrel was soaking wet, breathing slowly, eyes closed and had its arms extended straight out, almost as if it was reaching for air. It was still alive but never opened its eyes or moved apart from breathing,” Cortez said.

A Facebook post from Cortez asking for advice received responses to contact the Santa Barbara Wildlife Care Network, who told Cortez to put the squirrel in a box with soft padding and openings for air, and bring her over to the center.

SBWCN offers updates on the animals brought in, and Cortez reached out and learned from them that the squirrel, bone-cold from the storms, would have passed away if not for her. Two days after being taken in, the squirrel was released back into the wild.

“She was released back into the same field she came from which made me extremely happy, because I was concerned she would be taken from her possible squirrel friends and family. Me and my dog, Ben, walk through that same field every single day and like to think that she is one of the squirrels we constantly see running around.”

Minsu Kim, another Isla Vista resident, found a seagull on the ground in his backyard on Del Playa that sported head wounds and couldn’t stand or fly. Unsure of what to do, Kim texted one of his friends who was involved with SBWCN. He followed his friend’s advice and put the gull in a cardboard box lined with a towel for shelter overnight, and even though it was after hours, called SBWCN and left a voicemail. At 8 a.m. the next morning, a volunteer transporter came to bring the gull to SBWCN. Unfortunately the gull didn’t make it, but Kim described the experience as positive.

“This kind of situation never happened in my life, so I’d say it was a positive experience, [having the opportunity to save] an animal’s life!”

Ivana’s Hummingbird from the Bike Path

Ivana Cruz, a fourth-year UCSB student, found an injured hummingbird on the bike paths on her way home, next to the Theater and Dance building. The biker in front of her had swerved to avoid hitting the tiny bird. Ivana brought the bird home for the night and put it in a little saltine box she lined with cotton. She took a Lyft to SBWCN the next day to drop the bird off personally. Thanks to Cruz’s proactivity, the hummingbird survived and was released after 34 days of care.

When asked about the experience, Cruz stated, “I was relieved when I felt like I got it to a group that knew what it was doing.”

Hundreds of UCSB students find wildlife in need each and every year.

If you find an animal that needs help, call the Santa Barbara Wildlife Care Network’s helpline at (805) 681-1080. If you think an animal needs to get to the Wildlife Care Center as soon as possible, SBWCN recommends the following: