Activist and advisor Diana Collins Puente – a woman who has worked for over five years to bring Isla Vista together as a community following the 2014 tragedy – will lead the Isla Vista Community Center as its first director, taking on the challenge of running a center that many Isla Vistans thought would never exist. 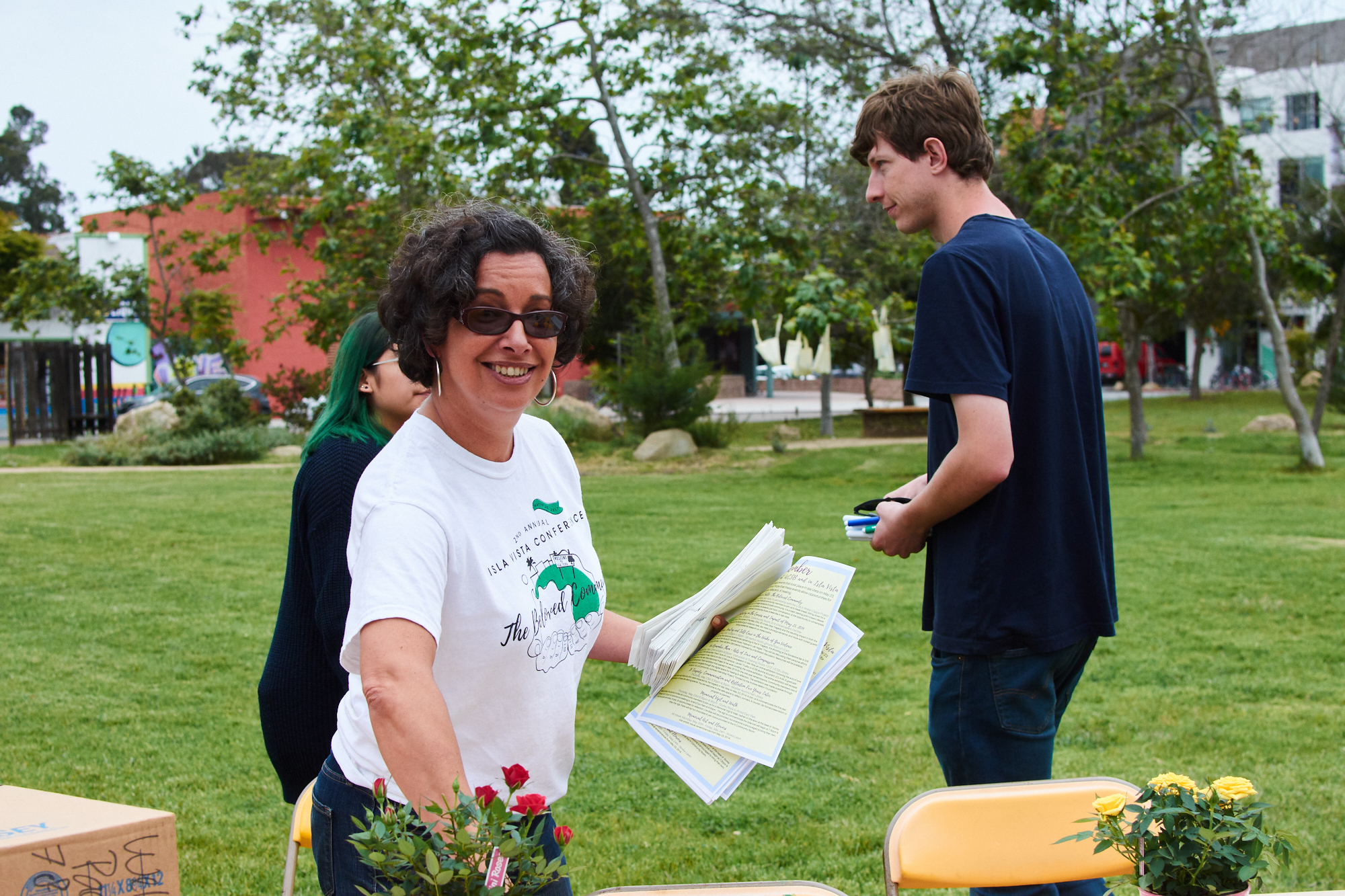 Collins Puente (pictured above at a memorial event for the 2014 I.V. Tragedy) was chosen for the director role because of her history of activism. Ida Kazerani / Daily Nexus

Five years ago, Collins Puente joined this seaside community as UC Santa Barbara’s Associated Students (A.S.) community advisor. She was recruited for the position following the 2014 Isla Vista tragedy because, as she put it, the community wanted to see tangible changes in the culture, social services and space in I.V.: “There was a strong need for healing from the tragedy.”

Collins Puente credited her time at A.S. for preparing her for the role of the I.V. Community Center (IVCC) director. While working for A.S., she focused on community-based initiatives, tackling several projects and focusing on “solving everyday problems that the residents of Isla Vista faced, like tenant issues, eviction, mental health, alcohol and drugs.”

Collins Puente, who was exposed to activism growing up as a child in Guatemala during its Civil War, was selected for her role based on her history as an activist, she said in an interview with the Nexus.

But the path toward creating the center, let alone hiring a director, was not linear; the building housing the first community center in I.V. was sold in the 1970s, and financial setbacks prevented the community from building another. It wasn’t until 2012, after the county purchased the center’s current location at 976 Embarcadero del Mar, that steps towards actively creating a new center began.

The center will have a soft opening in October with a grand opening in either January or February 2020, according to an update posted to the Isla Vista Community Services District (I.V. CSD) Facebook page. Collins Puente officially began her position on Aug. 1.

According to Collins Puente, the IVCC will act as a hub for I.V. residents, addressing the various needs of the community. Puente will work with the IVCC Advisory Board, which is currently being filled, to “ensure that the values and priorities of community members are thoughtfully taken into account in order to inform the strategic direction, vision, and programming of the new Community Center,” according to a press release sent out by the I.V. CSD board of directors in mid-July.

The advisory board will be composed of several members of the community, some of whom have already been elected by the I.V. CSD. At the Aug. 13 I.V. CSD meeting, the board voted to postpone its vote on the final non-profit seat on the board until its Aug. 27 meeting.

The new IVCC director position is funded by a $177,000 one-year grant from the I.V. CSD to Isla Vista Youth Projects (IVYP) in order to manage the development, fundraising, programming and strategic future of the center, the press release said.

“I intend for the community to feel a sense of co-ownership over the space so that it can contribute to being a model of collaboration.”

I.V. CSD Board President Spencer Brandt said that Collin Puente’s experience with social justice through nonprofit work will help create a “collective vision” for the center.

“I’ve been lucky to know and work with people in Isla Vista who are incredibly dedicated to building community – none more so than Diana Collins-Puente. As the Director of Community Affairs in Associated Students, she advised me and countless other students who sought to make a difference,” Brandt said in an email statement.

“Isla Vistans have been fighting for a community center for over three decades, and I can’t think of a better person to implement our collective vision than Diana.”

Collins Puente has big plans for the future of the community center, hoping to balance the needs of the UCSB student population living in I.V. with the rest of the community. She hopes to craft the IVCC into a multi-use space, which would include hosting exercise and nutrition classes as well as a wide range of recreational and self-help activities.

“UCSB has a need for classrooms, so the space could potentially be used for that, while also providing a practical space for the rest of the community. Classes would be offered to them as well, ranging from legal classes to self-help classes, and we plan to include a demonstration kitchen,” Collins Puente said.

Collins Puente noted that plans for the IVCC are rooted in her involvement with the Pardall Center – a UCSB-operated collaborative space located in I.V. – for the last five years.

Collins Puente also plans to work with the Isla Vista Recreation and Park District, which will manage the recreational activities and play a role in the development of the space, alongside the IVYP.

“I intend for the community to feel a sense of co-ownership over the space so that it can contribute to being a model of collaboration,” Collins Puente said. “The center really speaks to the very unique nature of how I.V. has been able to support the building of institutions like the IVYP, the IVCC, and the I.V. CSD… It is a hub that brings together diverse members of the community that allows for us to engage with each other.”

“There’s a pride in it being a community effort.”

Um, I hope the Isla Vista Community Center is not used to hold classes for UCSB. The University has millions of dollars, and they don’t need to be subsidized by the community they have, in the past, neglected and abused. They can provide their OWN classroom space. The Isla Vista Community Center should be there for the needs of the community of Isla Vista, NOT the University of California!