The Daily Nexus
Science & Tech
The Art of Change: Dissecting the Role of Lobbying in Climate Policy
July 25, 2019 at 10:00 am by Natalie Overton

Climate policy is a hot topic these days (pun intended). Yet, there’s a sense of frustration that accompanies many discussions of climate-targeted legislation: why isn’t anything happening? Is it gridlock? Is bipartisan climate legislation politically feasible or even desirable? What will it take to change our world for the better from the top down?

For the first time in a while, we seem to have some answers.

In the Bren-based Environmental Market Solutions Lab (emLab), UCSB-affiliated researchers Kyle Meng and Ashwin Rode have some big ideas brewing, as seen in their study published in the journal Nature Climate Change.

The subject of their analysis is the 2009 Waxman-Markey bill, also known as the American Clean Energy and Security Act (ACES). This bill was, and still is, the piece of climate regulation in the U.S. that has come the closest to becoming law — it’s the only one that has passed either house of Congress.

Using some pretty clever data analysis, Meng and Rode were able to measure exactly how the Waxman-Markey bill was affected by the lobbying money surrounding its approval in the House and its no-show in the Senate.

Here’s their main finding: Lobbying by various public firms lowered the probability of Congress passing the ACES by 13%. And because it wasn’t enacted, Meng and Rode found an expected social cost of $60 billion.

The study also notes a few other significant findings. Firstly, Meng and Rode show that there is a statistically significant relationship between the amount of money a firm puts into lobbying the bill and how much the said firm expects its stock values will increase or decrease if the bill is enacted. Simply put, if a firm expects the bill to greatly affect its stock value, it will put more money into lobbying that bill. This is illustrated in the graph pictured below, pulled from their published paper. 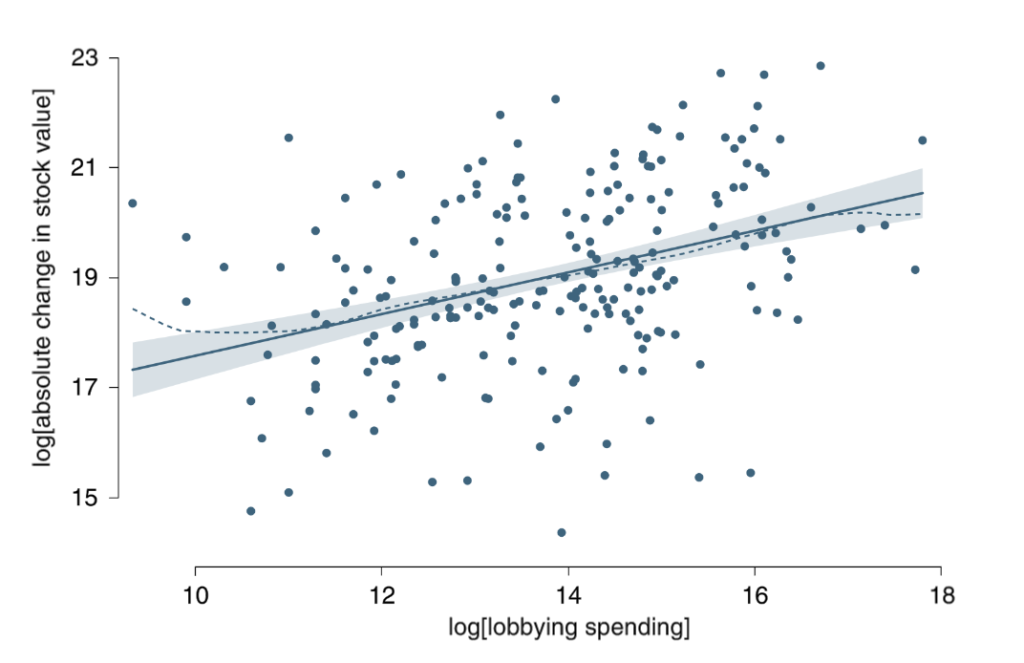 The relationship between lobbying spending on the Waxman-Markey bill and change in firm-level stock value is depicted, with the solid line showing a linear fit and the shaded area showing an associated 90% confidence interval. / Courtesy of Nature Climate Change

Second, in this case at least, losers win.

Finally, whether or not these firms are pro- or anti-bill, the more they lobby, the less they get. Meng and Rode refer to this pattern as “diminishing returns to lobbying.”

“In particular, we demonstrate […] how more sophisticated targeting of which firms get free permits under a cap-and-trade programme can increase the probability of policy enactment,” Meng and Rode write.

In the “naïve” carbon trading permit allocation scenario, free permits are distributed evenly to all the tested firms — the winners and the losers. This effectively eliminates the competition between firms that incentivizes opposition to these climate policies. 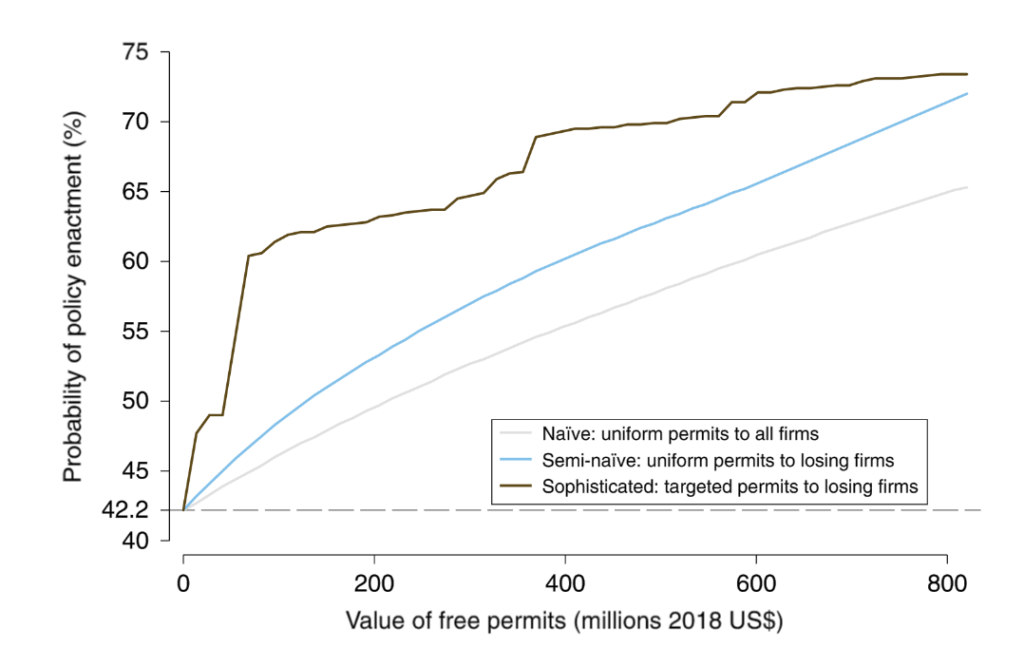 This approach’s effect is depicted in the gray line on the graph pictured above. The paper shows that even the “naïve” approach is effective. Even better is the “sophisticated” scenario, in which the firms that lose the least (aren’t as sorely affected) get fewer permits than those who lose more (are more affected by the policy). This scenario, represented by the brown line on the graph, maximizes the probability of the policy being enacted.

This important research sheds light on why the ACES bill failed and, to some great relief, how to navigate the issue of interest groups’ moneyed involvement in politics.

Meng and Rode have struck gold, providing those interested in progressive climate change legislation with a reason for optimism and the beginnings of a path toward making that optimism a reality.