“After you,” I assert with a humble smile as I hold back the steel staff-entrance door for my coworker. While adjusting his silky red tie, my co-worker responds with a courtly grin, “No no, after you, miss. Ladies first.”

“Please,” I insist. “I already have it propped open.” As I kindly tilt my head, gesturing for him to enter, he counters with “I can’t, miss — ladies always go first.” 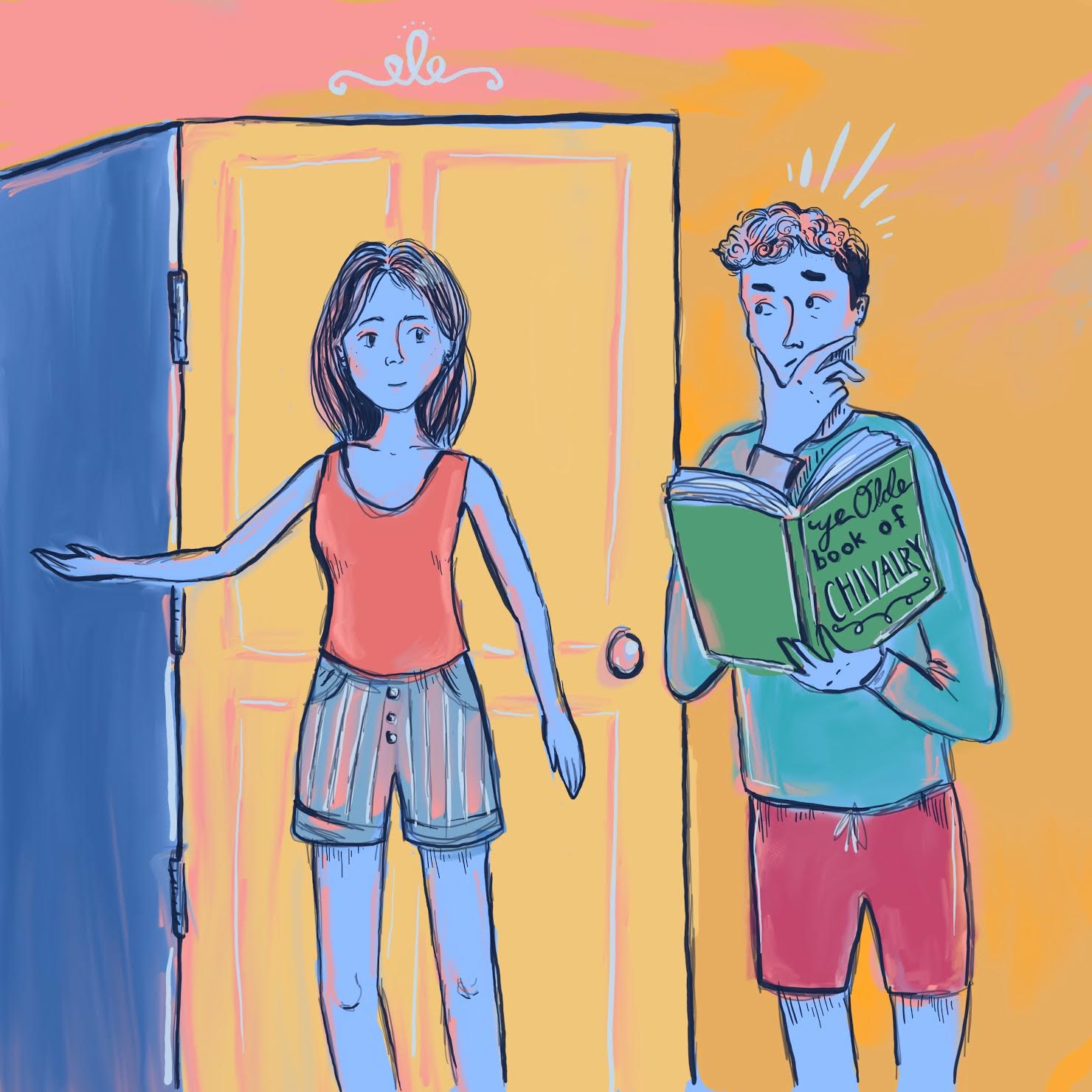 This brief encounter put me in a contemplative mood from the start of my shift. I know my coworker was just trying to be polite, but his execution irked me. Why did his gesture of politesse supersede mine? Why did I have to succumb to his wishes just because that’s “how it’s done”? Who made these standards anyway?

Turns out, this chivalrous custom has no clear roots. One Italian legend recounts the story of two lovers whose families disapprove of their marriage. In order to never to live apart, the lovers decide to commit suicide by jumping off a cliff. When they reach the fateful edge, the man declares, “I cannot bear to see you die, my dearest, so I shall jump first.” The woman granted her lover his wish of taking the first jump, but after witnessing his horrifically graphic death, the woman had a change of heart. She climbed down the mountain and lived a full life on Earth. As the story goes, the phrase “ladies first” was born.

Others claim that the phrase dates back to 1852 when the HMS Birkenhead was transporting troops but struck an uncharted rock and began to sink. Amidst the chaos, the crew followed the unofficial “women and children first” protocol to determine who would get a spot in the limited lifeboats. This unwritten rule became widespread after the sinking of the Titanic in 1912 in which the captain explicitly issued for women and children to be saved first.

Regardless of where “ladies first” originates from, its effects run deep in present-day society. The two-word string is stitched so tightly into our vocabulary that we view it as a fact, rather than a man-made (and no, I do not mean ‘human-made’) norm.

On that telling morning at work, my coworker assumed that I had forgotten the instinctive doorway passage hierarchy. He — the almighty alpha rooster—presumed that by simply clucking that magical phrase, I — the subordinate hen — would instantly return to my place in the pecking order without batting an eye.

Even though his gesture had courteous intent, this “ladies first” ideology upholds patriarchal dominion. On a basic level, it reinforces the gendered stereotype that women can’t and shouldn’t do hard physical tasks and implies that men must accommodate women’s inherent weakness. We can never be equal if women are assumed to be dependent on men to get to where we want to go.

Beyond simple day to day life, such forced male dependency is also de jure. Dr. Lucy Delap of Cambridge University argues that the British elite vehemently propagated the Titanic legend to prevent women from obtaining suffrage. In other words, women had no need for the right to vote because men, even in the face of death, would put the interests of women before their own.

While simply being unequal on a male-female binary, such ideology fails to account for the multitude of gender identities that exist in our world. Where does someone who identifies as nonbinary fit into the doorway passage hierarchy? My instincts tell me dead last, as our society tends to marginalize individuals of nonbinary identities. Yet we will never know since the restrictive phrase speaks only to the “she/hers.”

Gendered norms and clichés have large consequences. Recently, the Women’s World Cup was brought into the spotlight. For years, the United States Soccer Federation has been paying women players less than those on the men’s team, even though the women routinely and greatly outperform the men. On a greater scale, the median U.S. woman worker makes 83 cents for every dollar paid to her male counterpart.

These gendered disparities stretch beyond my summer restaurant job and the sports industry and bleed through countless institutions all over the globe. Therefore, it’s important to be aware of the consequences of our own actions. Small, thoughtless phrases contribute to larger systems, which oppress women and those of nonbinary genders around the world.

I’m not upset with my coworker. Allowing ladies to go first is what he was taught. But moving forward, I ask that he change. I ask that we as a society change. We must accept that gender roles are constructed and can therefore be reconstructed. We must offer help to those who need it and accept help from those who can afford it, not because dated gender norms command us to but because it’s the right thing to do. We must abandon notions of gender equality, and strive for intersectional equity. Rather than dishing out pre-portioned aid (i.e. one door hold for the lady followed by one door hold for the gentleman), support should be given to those who need it when they need it. If I stumbled upon a man with a broken arm struggling to open a door, I would hold the door open for him, in hopes that he would do the same for me if I ever found myself in his position. He should not consider a female-identifying individual holding the door for him a blow to his masculinity. He is just a person in need of a hand, so I give it to him. Nothing more, nothing less.

Miya Herzstein believes that “ladies first” is a twisted paradox that should be thrown out the window.

I usually hold the door open for anyone, male or female. My only comment is, “please” or “please go ahead.” Sure enough, I’ve received criticism from women calling me a sexist. I just look at them and shake my head.

How perfect does one’s life have to be where someone holding the door for you and saying ‘ladies first’ is considered oppressive?

You probably wouldn’t enjoy the south, we say please, thank you, and hold the door for women and the elderly.

Most toddlers grow out of throwing temper tantrums

Has someone put her in the “Unemployable FemiNazi Retard” database yet?

Oh wait, she put herself there and the DB is the search engine indexed internet. Ms. Herzstein, the internet is forever and you’ve excluded at least 60% of possible future employers. Even leftists with some sympathy now know that not only are you a crank, and nasty, but you’re mouthy about it.

Is this from ‘The Onion’?

Dear, this is very clearly a first-world issue. Coming from a country where a third of the population cannot afford to eat and women get treated as livestock and men as knife-fodder, you’ll understand that I find this line of discussion simply boring and without much merit. Whether or not you found it offensive or took exception to what you assume this man’s thought-process to be, the core of the matter still boils down to someone trying to do something nice for you. Many women still appreciate the door being held for them and take it as a polite gesture,… Read more »

Thanks for writing this nice article and trying to explain how gender roles, like this one, are an structural problem in our society. And because gender role and sexism, just like racism and homophobia are usually structural problems in society, we’ll still see the majority of people having trouble to understand why it’s a bad thing. Plus, the fact that this is not the bigger problem in our society doesn’t prevent anyone from fighting against or criticise it at the same time we fight bigger problems too. It’s not mutually exclusive. So, once more, thanks and congratulations for this text!… Read more »

It has led to quiet hilarity, to allow ‘ladies first’ as a form of importance, consider them first, etc. I have seen this twice, if only by the rules of a bus stop. People might be waiting for a bus, one does come, and the women ‘run’ to the curb, demanding to be put on the carrier first. For the uh, two minutes? waiting for the women to climb in, I have waited on the bench at the bus stop, or sit on a rock of some sort, MUCH MORE COMFORTABLE than standing in line, while the women shuffle aboard.… Read more »