Less well known is how galaxies continue to acquire gas to feed the sustained creation of new stars over billions of years or even how this gas surrounding galaxies moves.

Published in The Astrophysical Journal, a new paper from UCSB researchers explores the environment of galaxies to help answer these questions.

“Scientists don’t understand very well how galaxies can continue to get additional fuel over cosmic timescales. Our study was about trying to find the reservoir of gas that feeds galaxies like the Milky Way,” Crystal Martin, a professor in UCSB’s Department of Physics, said.

Martin and graduate student Stephanie Ho were among the investigators to study the behavior of the gas surrounding galaxies — circumgalactic gas — and its effect on galaxies.

To do so, they used bright beacons of light emitted from quasars, supermassive black holes, behind galaxies. As the light from quasars travels through the halo gas surrounding the galaxy, the gas absorbs some of the light at a specific wavelength based on its chemical composition.

Martin and her team measured these wavelengths to identify the location and size of 50 nearby galaxies. They also tracked the activity of circumgalactic gas, observing small velocity shifts at several 100,000s of kilometers per second.

“We use [the spectra] to tell whether a given type of gas is moving toward us or moving away from us,” Martin said.

Called the Doppler shift, this physics phenomenon is also observed when an approaching train whistle has a higher pitch that then drops when the train passes by.

“In our case, we’re dealing with light, which is electromagnetic waves instead of sound waves. But the Doppler shift is the same principle: Frequency is high when [the gas] is approaching, and the frequency is low when it’s moving away,” Martin explained.

The researchers discovered that much of the halo gas is spinning and “in a direction that seems to know about the galactic disk.”

The observation suggests that the disks seen in present-day galaxies developed from a similar gas as in older galaxies because they have the same rotation, Martin said.

“It strengthens the idea that circumgalactic gas is a reservoir of fuel out of which star-forming galaxies form.” 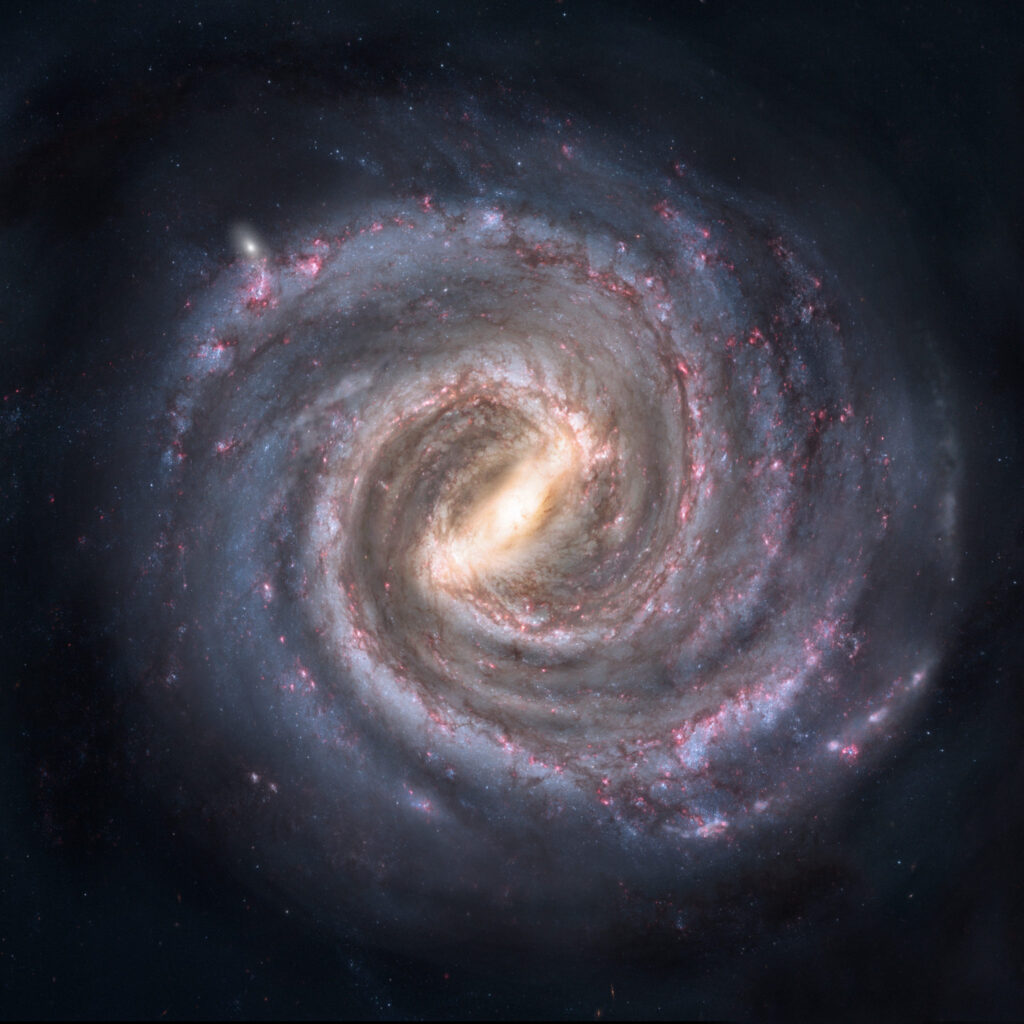 Martin’s research explored circumgalactic gas, including how its angular momentum influences the shape of galaxies, depicted in this artist’s rendition of the Milky Way. / Courtesy of Wikimedia Commons

Moreover, the rotating activity of the halo gas determines the rotation of the galactic disk it forms.

Our solar system orbits the center of the Milky Way galaxy, about 24,000 light-years away. The angular momentum associated with the orbital motion maintains our solar system’s relative position, without which we would hurtle toward the galaxy’s center.

Martin uses the analogy of a figure skater to describe angular momentum: A spinning skater initially with outstretched arms begins to rotate faster when she quickly brings her arms to her chest.

“That’s kind of the idea here, that we were detecting gas at large radii that has some angular momentum. And the gas falls in toward the galaxy due to gravity. This angular momentum is conserved, and it causes [the gas] to spin up, to rotate at higher velocities and form a disk,” Martin described.

This creates the classic picture of the Milky Way galaxy — a spinning galactic disk with spiral arms — you might spot in a science textbook.

Martin plans to further explore the circumgalactic gas. Its structure consists of a multi-phase medium which is similar to the atmosphere’s, with clouds embedded within a smooth medium. While she has been investigating the motion of the colder clouds surrounding the galaxy, Martin is interested in more closely examining the hotter, diffuse medium.

“We would like to use other spectral lines that are in the ultraviolet part of the spectrum instead of the optical, that we probe [for] how this warmer component of the gas moves. We’d like to see if it is rotating the same way as the cold clouds,” she said.