Two years after the Adult Use of Marijuana Act — better known as Proposition 64 — was ratified in 2016, California placed multiple taxes on the marijuana industry, from the plant’s harvest to its vending at a dispensary.

Santa Barbara County, however, added more than just taxes. Recently, the Santa Barbara County Planning Commission, which oversees land use in the county, voted for stricter regulations, while the Goleta City Council slashed the number of commercial dispensaries in the town by over half.

But in recent months, UC Santa Barbara students have rallied behind a new initiative calling for the redirection of a year-old cultivation tax, asking that the money collected from the tax be used to address college affordability and the basic needs of students. 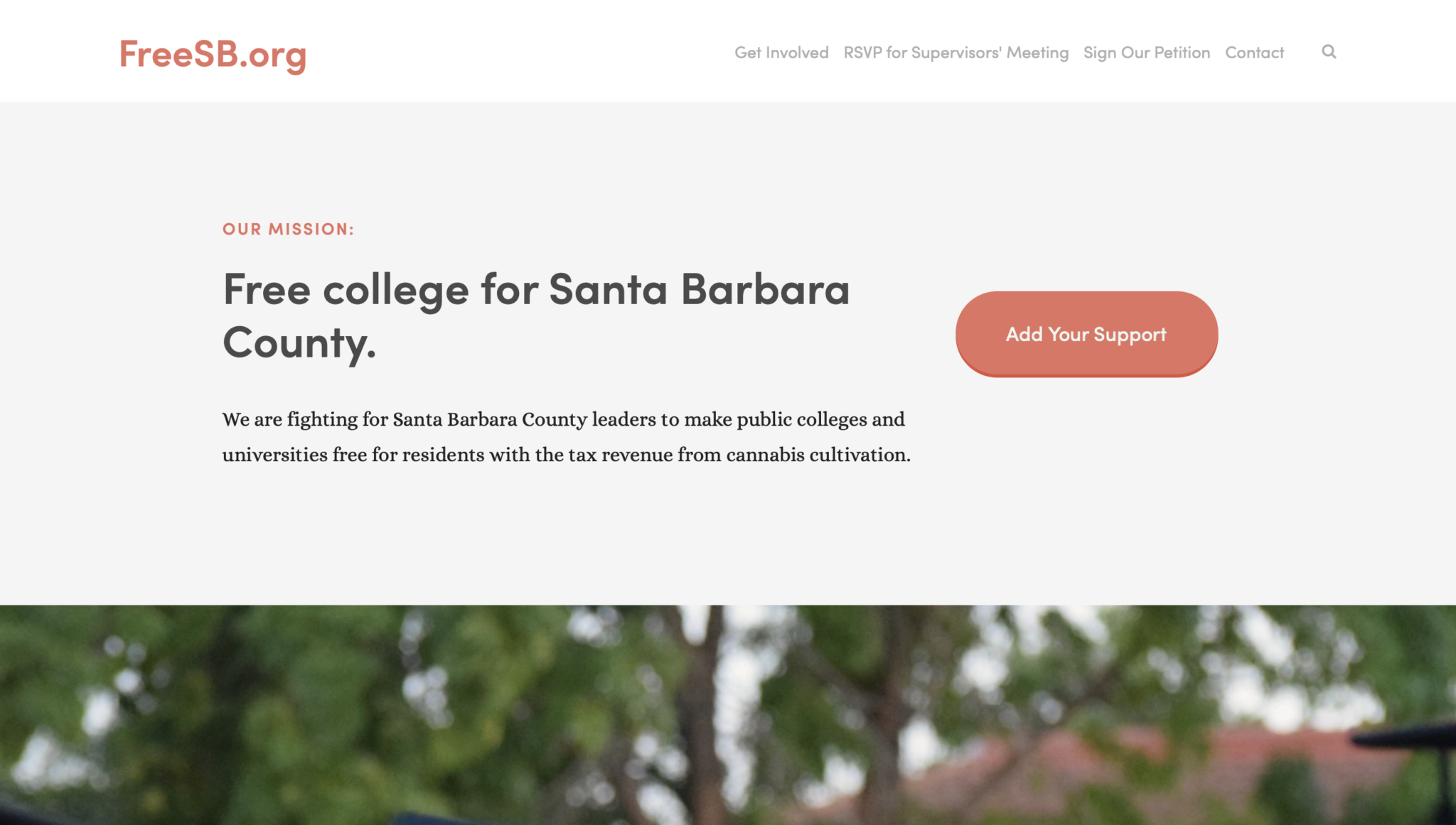 Ralliers behind the Free SB Campaign aim to tap into the revenue stream of the marijuana cultivation tax to fund grants and scholarships for students in need of basic necessities — such as books and housing — or financial aid, according to Tom Steel, one of the campaign’s organizers and a UCSB class of 2019 graduate.

“The main goal that we’re trying to hit on is to be able to use [marijuana cultivation] tax revenue in a smart way that allows us to live in a community that’s free from student hunger, free from student homelessness and free from overwhelming student loan debt,” Steel said.

Eric Moon, an incoming third-year history of public policy major and Associated Students (A.S.) senator who is also a current chair of the A.S. Food Security Committee, said the Free SB campaign set its sights specifically on the cultivation tax because of its “reliability”; due to the recency of legalized marijuana, Moon said, the tax is unlikely to go anywhere for some time, which the campaign flagged as a good marker for consistent funds.

Marijuana is also a popular product among local growers — over “a third of all cultivation licenses issued in California to date are held in Santa Barbara County,” according to a press release from State Senator Hannah-Beth Jackson, who represents Santa Barbara County.

Initially, the Santa Maria Times reported that Santa Barbara County could earn between $4 and $64 million in tax revenue per year. According to quarterly reports from the CDTFA, however, the entire state yielded only $35 million in cultivation tax revenue in 2018.

As of now, Steel said the state is using the cultivation tax for administrative purposes, namely to “hire people to process the applications for [marijuana] growers and to make sure that legal growers are abiding [by] codes and to shut down illegal growing operations.”

The best way to change where the money goes, Steel said, is to start locally. Aside from engaging with UCSB student leaders about the tax, Steel said he is also focused on “trying to get our student body aware of the situation.” He hopes to rally enough student support so that local lawmakers will consider amending the tax to grant the campaign access to the revenue stream.

“The [Santa Barbara County Board of] supervisors are revisiting [how the cultivation tax can be used]. If we’re able to show large community support behind it, I think we will bring the issue to the forefront of the supervisors’ attention,” he said.

Steel also acknowledged that UCSB students are not unique to facing financial insecurities. He described the situation as a “county issue,” noting that students at several other universities in the area — such as Hancock College and Santa Barbara City College — face similar economic hardships.

At UCSB, Moon said he could help support the initiative by “writ[ing] up a resolution in support of this campaign” within the A.S. Senate next year and by reaching out to various campus organizations to further bolster the campaign.

Going forward, both Moon and Steel said the campaign’s foremost goal is to garner support at the July 9 Board of Supervisors meeting in Santa Maria.

“We’re really trying to build from the ground up a coalition of grassroots movements. We’re [aiming] to make those who could affect change, like the board supervisors, aware of the needs and concerns of the tens of thousands of students in the county,” Moon said.

Hey Gauchos, how about you don’t spend your money on weed and booze and put it towards your college expenses.

Cultivating weed is taxed and the money would go to college affordability. Can you read?

And if you don’t waste your money on intoxicants, you have more money to pay towards tuition.