The Daily Nexus
Science & Tech
Where in the World is Marine Biodiversity Risk More Prevalent?
June 27, 2019 at 10:00 am by Jacqueline Wen

In assessing the health of Earth’s oceans, researchers at UC Santa Barbara and Virginia’s Old Dominion University set out to map the global distribution of where marine species are most at risk for extinction.

The study, published in the journal Conservation Letters, also considers how this risk may be affected in marine protected areas (MPAs) compared to in non-protected areas.

“If we compare conservation status to the species range of thousands of different species at the same time, we can get a sense of where in the oceans are the ecosystems, the biodiversity, most at risk for extinction from threats that people put on the species,” Casey O’Hara, a doctoral student in UCSB’s Bren School of Environmental Science & Management and lead author of the paper, said.

After compiling the range and conservation status of 5,291 marine species on the International Union for Conservation of Nature’s Red List of Threatened Species, O’Hara and colleagues, including his advisor, professor Ben Halpern, calculated the average extinction risk for each species against their worldwide distribution.

Species on the Red List are categorized into nine groups which fall under three broader groups: “extinct,” “threatened” and “lower risk.” “Threatened” species can further be classified as “critically endangered,” “endangered” or “vulnerable”, and “lower risk” incorporates species which are “near threatened,” “conservation dependent” or of “least concern.”

The researchers found that global marine biodiversity risk averaged just under “near threatened,” with nearly 0.1% of species considered to be of “least concern.” For 83% of the ocean, at least 25% of species are deemed “threatened.”

Additionally, the study revealed that high seas biodiversity faced a disproportionately higher risk of extinction than in national waters. The Mediterranean and Black Seas faced the greatest biodiversity risk. 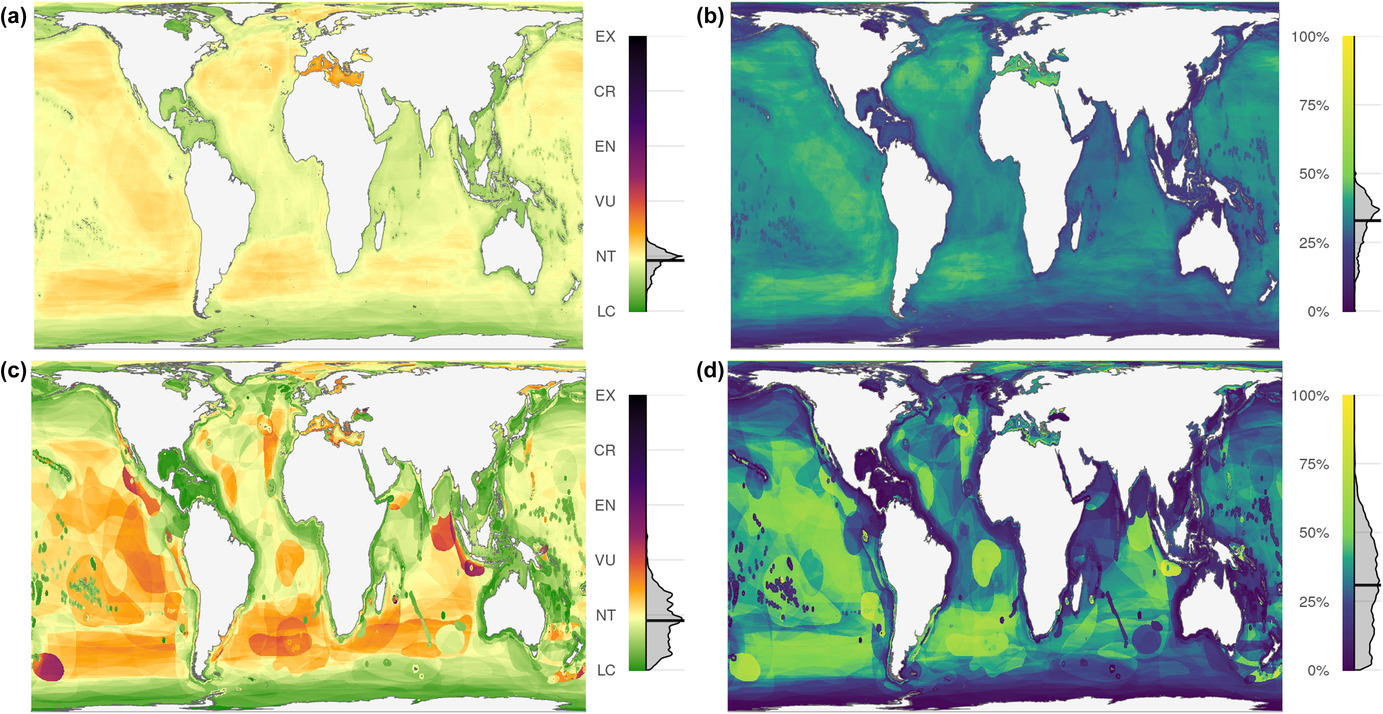 Figure (a) shows biodiversity risk and (b) shows the percent of threatened local species, with both figures weighing all surveyed species equally regardless of the size of their habitat range. (c) and (d) respectively display biodiversity risk and proportion of threatened species while considering their ranges to emphasize the higher risk of extinction endemic species face. Sidebars present the span of conservation status and proportion of threatened species. / Courtesy of Conservation Letters

When examining biodiversity risk in MPAs versus in non-protected areas, O’Hara noted that variations in risk were nearly indistinguishable. But different regions showed considerable variation in how they set up marine reserve protection.

“There are two different philosophies of protection that you can consider: One would be proactive protection, which would be … maintaining [an already] healthy, pristine area for future generations [and to] allow that place to remain relatively untouched by human threats,” O’Hara explained.

The other strategy is reactive protection, which “[reacts] to the threats that are already existing” in a heavily impacted place. The main goal to alleviate stressors and allow it to “recover back to healthy states.”

According to O’Hara, achieving a balance of both protection approaches would provide the ideal “representative protection.”

One concern the scientists had, particularly for protection in less-impacted areas, was the presence of “paper parks.” These regions appear protected on paper but may lack biodiversity risk in the first place.

Their research does not identify paper parks but offers a clearer profile of where signals to find paper parks may exist.

“Those areas could also be less impacted just because they’re far away; they don’t have a lot of resources that people are actively using. So you run the risk of protecting an area that is not actually really at risk,” O’Hara said.

Inversely, he added, for places emphasizing reactive protection such as North America, the data could provide valuable insight into where to potentially implement proactive protection while incurring a lower political and economic cost.

Such considerations may come in handy as the global biodiversity protection and conservation targets set by the United Nations Convention on Biodiversity in 2010 will undergo renegotiations in 2020.

“With these results, this can help inform that renegotiation process by highlighting some areas where a greater proportion of threatened species [are], to help focus attention on conserving those areas,” O’Hara said.

“It takes a lot of people doing a lot of research [including at UCSB] and a lot of effort to be able to protect our oceans for the future. We’re not where we need to be, but hopefully we’ll be there soon.”