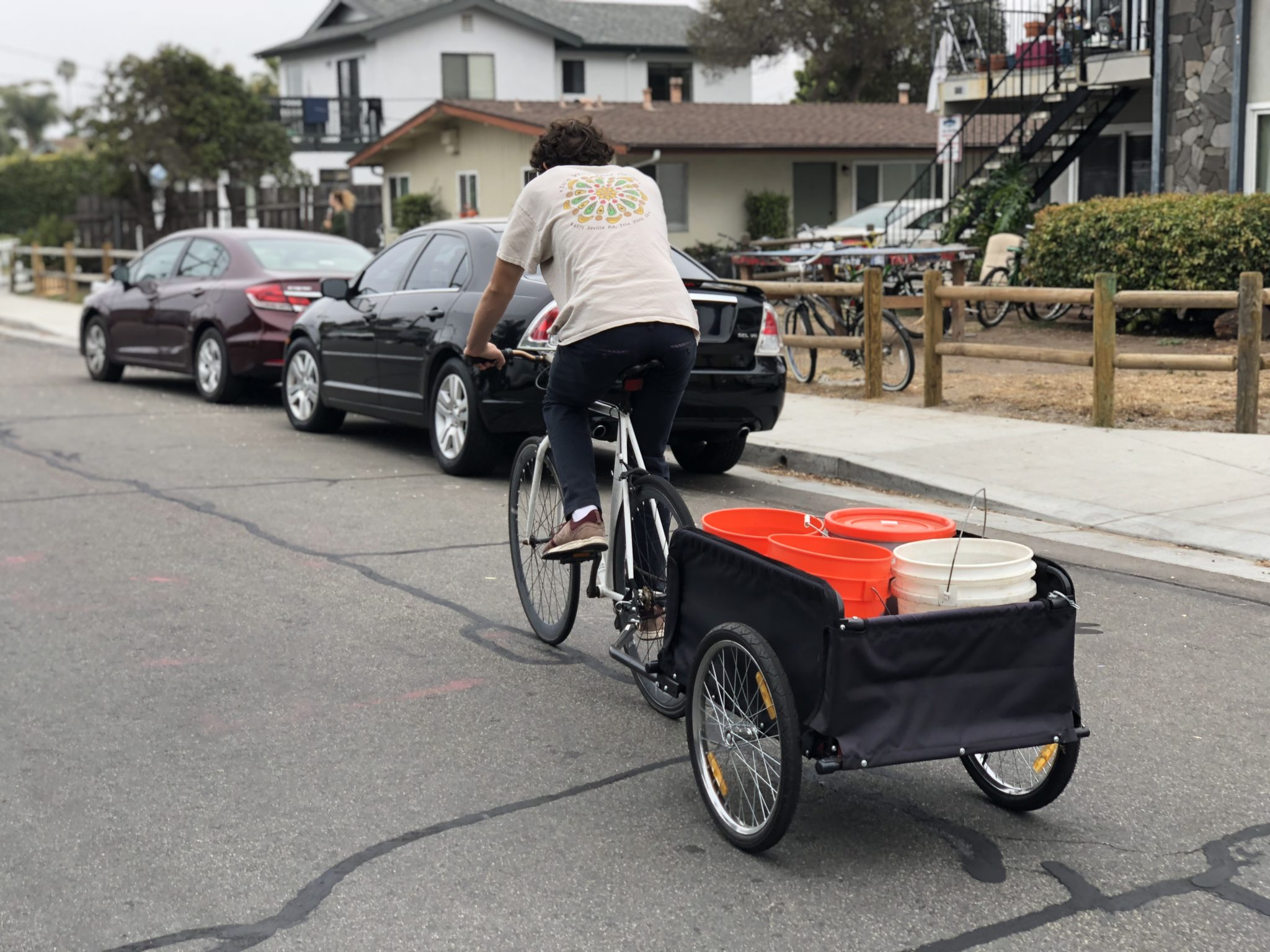 IVCC, which began its program in Fall 2017, will expand its weekly service to 96 houses in Isla Vista for Fall Quarter 2019. / Courtesy of Siena Hooper

Around 30% of landfills consist of food scraps and yard waste, according to the U.S. Environmental Protection Agency.

If these organic wastes were instead composted or disposed of in soil, soil quality could increase and provide nutrients for plants. By not occupying space in landfills and decomposing, compostable organic materials can also significantly reduce emissions of methane, a potent greenhouse gas.

“The Surfrider Foundation is a nationwide foundation that works on protecting our nation’s beaches through advocacy with the government, beach cleanups and other programs such as monitoring the water quality of our oceans or maintaining healthy soil in our gardens, which is what our compost program does,” Siena Hooper, co-director of the Isla Vista Compost Collective (IVCC), said.

The composting initiative began with an idea by Jacob Bider, the other co-director of IVCC, almost two years ago.

“I returned to UCSB after my first year eager to make a positive impact on the community of Isla Vista. As I moved out of the dorms and into a house on DP, I began to notice the excessive amount of waste produced by I.V. residents,” Bider said.

“While there were existing efforts being made to handle the recycling and disposal of solid waste from residences, there were no efforts being made to properly dispose of organic or food waste,” he continued. “I saw this not only as a problem that needed to be fixed, but also as an opportunity to provide residents with the ability to properly dispose, or compost, food waste from home. After joining the Ocean Friendly Gardens Committee of Isla Vista Surfrider in Fall 2017, I proposed that we create a compost program for Isla Vista, and we did just that.”

IVCC first tested its composting service during Fall 2017, serving under 10 I.V. houses. Currently, IVCC services 51 houses in I.V. It composts an average of 600 pounds of organic waste weekly, with over 10,000 pounds of compost produced since the program’s formation.

Each week, “Dirtriders” on bikes with a cargo trailer attached pick up buckets filled with food product from their designated houses. Then, they drop off a new, clean five-gallon bucket for their houses to compost in for another week.

Dirtriders maintain weekly communication with each house, informing the residents how many pounds of compost they’ve generated each week and helping them improve and learn if they’ve composted incorrectly.

“In the beginning of the quarter, we provide every house with laminated guidelines which explain what can and can’t be composted, such as no meat, dairy, or stickers on fruits and vegetables. When our Dirtriders sort through the compost and find something that wasn’t supposed to be composted, they will text that house and remind them to not put certain things in their compost in order to educate them on how to properly compost,” Hooper stated. 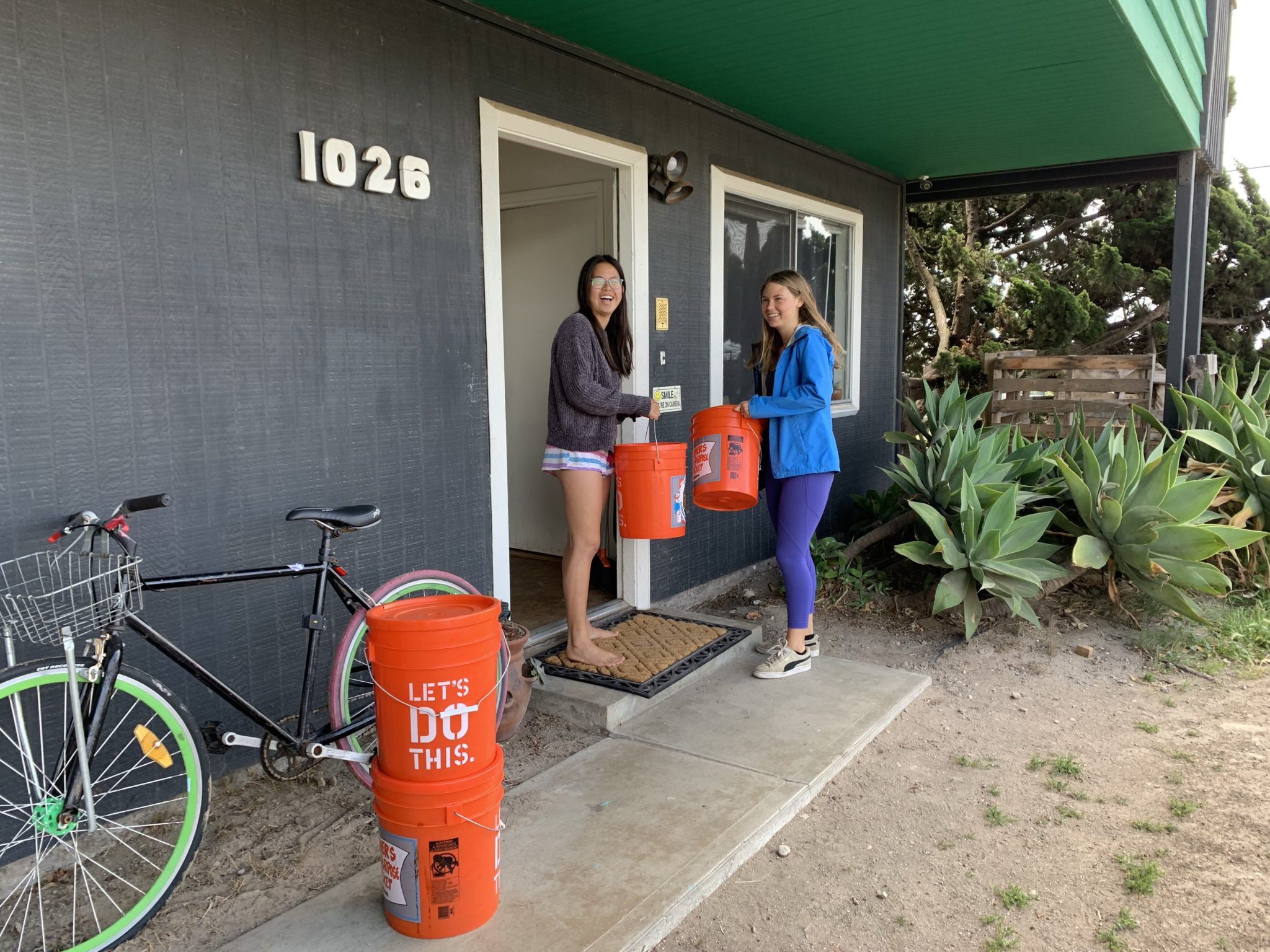 The Dirtriders then transport the food product to St. Michael’s University Church and the University United Methodist Church in Isla Vista to be added to their compost piles and community gardens.

Working with Isla Vista Recreation & Park District and the Resource Recovery and Waste Management Division of Santa Barbara, IVCC gives a portion of the collected food product to MarBorg Industries, a waste management service. This food product is converted to a nutrient dense soil amendment for use in Santa Barbara County orchards, minimizing the need for chemical fertilizers.

“Another benefit of donating to these churches is that food product of Isla Vista residents is created into compost that is ultimately used on community gardens in Isla Vista, contributing to a circular economy,” he added.

IVCC aims to service at least 25 houses over the summer before expanding its service to 96 houses in the 2019 fall quarter.

IVCC’s goal is to “expand [the program] as much as we can,” Hooper said. “Once we get a stable source of funding, we’ll probably try to invest in an electric golf cart so we can serve more houses during one shift. The bike isn’t the most efficient because we can only fit four buckets at one time … We just want to be able to serve as many people in our community as we can.”

To encourage participating houses to compost, IVCC holds a weekly competition in which it tracks how much compost is produced per person in each household.

“We’ll track the house that composted the most weight per person and we’ll highlight them every week. Since we began this competition we have seen an influx of food product being composted by houses,” Bider said.

“We have everyone in the winning house take a picture with their compost bucket, which is posted on our Instagram. Our houses have gotten really excited and competitive about it, which gives them an extra incentive to compost more each week,” Hooper said.

For those who may not be able to sign up with IVCC but are interested in composting, food products can be brought to the compost piles at St. Michael’s University Church and the United Methodist Church, which are open to the community. Compostable items can also be dropped off at Pardall Center’s compostable receptacle.

Isla Vista residents interested in composting with IVCC or becoming a Dirtrider in the summer or Fall Quarter 2019 can sign up at islavistacompost.com.