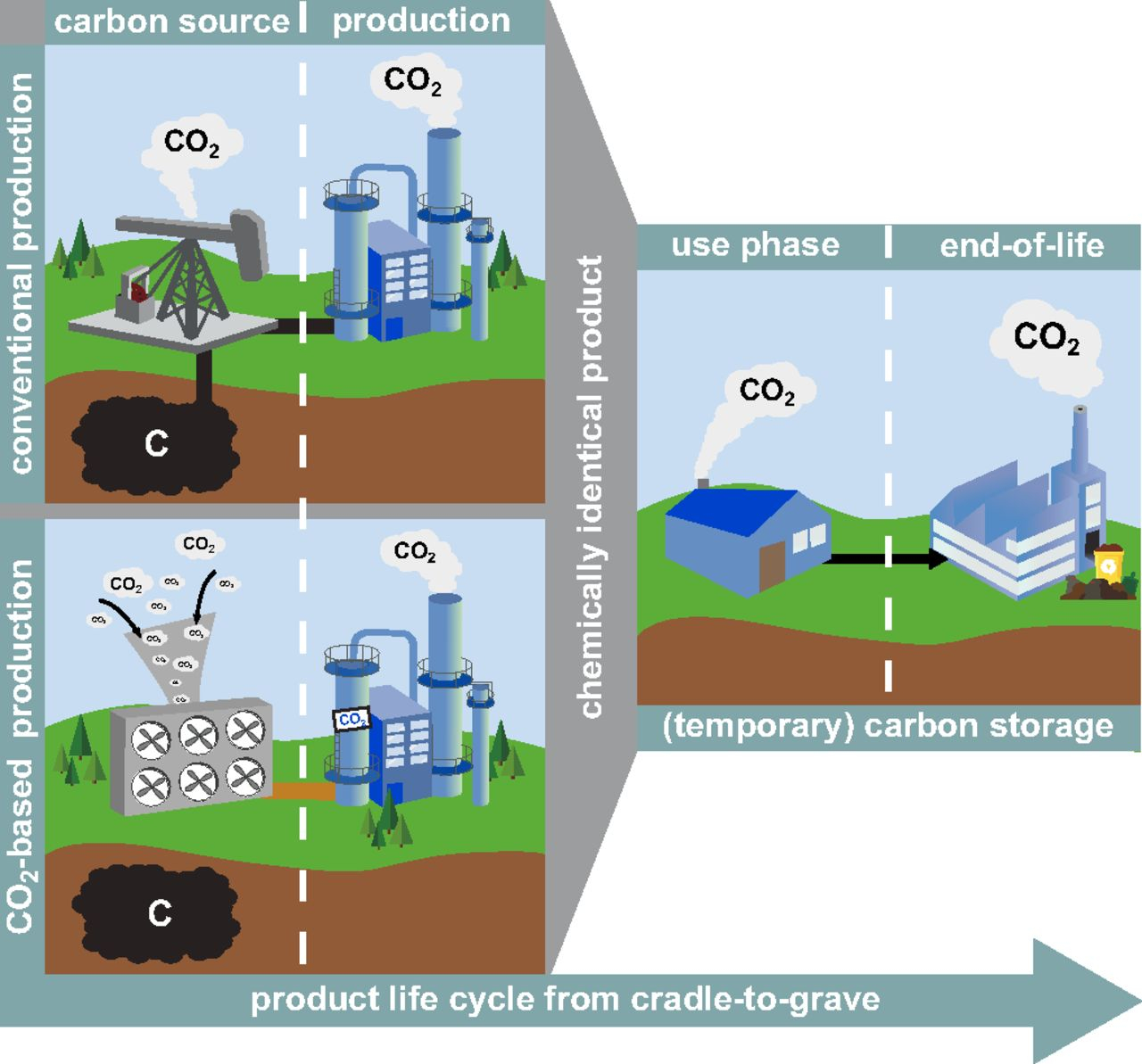 An illustration depicting implementing CCU technologies and subsequent changes in the life cycles of established chemicals. / Courtesy of PNAS

“The concept of Carbon Capture and Storage, CCS, is widely known, but if you do that you are not really utilizing it. Instead if you turn [carbon] into plastic then you can create value out of it,” Sangwon Suh, a Bren professor of industrial ecology and a co-author of the paper, said in an interview with the Nexus.

Plastics have become ubiquitous in the relatively short time since beginning production on a large scale. This coincides with rapid global industrialization, which has resulted in dramatic increases in greenhouse gas emissions.

Suh and his colleagues began to wonder how carbon emissions could be harnessed and stored in plastic and other chemical materials. “The question is whether we can turn this large volume of carbonaceous material that we are producing into an opportunity to store the carbon that is emitted into the atmosphere that creates the greenhouse gas effect.”

To investigate this, those same researchers collected process-level data from the chemical industry.

The researchers then began to study the processes which could be employed when turning carbon dioxide into potential substitutes for petrochemicals, which are currently used in the manufacturing of plastics.

Unfortunately, according to their study in the journal Proceedings of the National Academy of Sciences, CCU may not be as viable as originally thought. In order for carbon dioxide to act as a feedstock for CCU, hydrogen needs to be produced as an additive.

“Petrochemicals normally contain carbon, hydrogen and oxygen. With carbon dioxide, you have carbon and oxygen, but there’s no hydrogen, so we have to bring hydrogen from somewhere else,” Suh explained.

“Currently the largest source of hydrogen that we are using at the industrial scale is coming from natural gas. If we use natural gas to source hydrogen, we are actually creating more greenhouse gas emissions than if we produced plastic with petrochemicals.”

Electrolysis of water can be used as a source of hydrogen; however, this requires energy and, if this energy were sourced from fossil fuels, it would be counterproductive and result in more emissions than we are able to utilize.

“That leads us to an interesting question. Yes, there is a very significant potential for CCU to reduce greenhouse gas emissions — but in order to do that you need a huge amount of renewable energy, largely for the electrolysis,” Suh stated.

“We would need more [renewable energy] than what was projected to be produced by 2030, which was largely considered a very ambitious target already.”

In order for CCU to be viable, Suh believes that the adoption of CCU must coincide with a widespread transition to the use of renewable energy sources to accommodate the energy demands of electrolysis.

“The magnitude of renewable energy generation needed is huge — beyond what countries and international organizations are expecting to generate. And, going further we will need to develop means to regulate this: For example, large-scale battery storage technology.”

There are more complications involved with generating and transporting hydrogen than with the energy used in electrolysis.

“We need large-scale hydrogen production that is close enough to renewable sources to be able to use renewable electricity. Say the Mojave Desert produces a lot of renewable energy. If there [are] no means for us to transmit that electricity to a facility in, say, Santa Barbara, then we cannot use it,“ Suh detailed.

Transporting hydrogen to facilities that produce plastics and other chemicals is another issue exacerbated by the physical properties of hydrogen and the lack of infrastructure currently dedicated to the transport of hydrogen on an industrial scale.

“Hydrogen is such a low-density material; it’s the second lowest density material that we know of. So unless we have a pipeline infrastructure that is established, moving around hydrogen will be a huge challenge.”

Going beyond the issues of CCU and hydrogen generation, CCU doesn’t solve other issues related to plastic pollution, such as the accumulation of microplastics and single-use litter in the environment.

“The properties of those plastics will be identical to the plastics that we are generating today. There is no difference in terms of how they behave in the environment,” Suh said.

Suh believes that before CCU can be considered as a solution, scientists and producers must ask themselves two questions:

“First, [is it] even possible? Second, if it is, is it really the best use of renewable energy to dissociate hydrogen from water electrolysis to create plastics? I think ultimately it’ll take transitioning to a low-carbon infrastructure, and we need that at a massive scale,” Suh said.

“I think that’s what our paper is telling us. CCU will reduce greenhouse gas emissions, provided that we have a massive scale of renewable energy available. Unless we achieve that, CCU will never work.”