The Daily Nexus
UC News
Regents Approve New Classroom Building to Alleviate Over-Enrollment
May 30, 2019 at 12:02 am by Katherine Swartz

The UC Regents approved a plan for the construction of a new classroom building at UC Santa Barbara, which will be located between Davidson Library and the Psychology building, expected to be open by Spring Quarter 2023.

The project will cost over $97 million and will increase UCSB’s classroom capacity by 35%, according to the UC Finance and Capital Strategies Committee’s proposal. The building will include five new lecture halls, three active learning classrooms and 20 discussion classrooms, totaling 2,000 new seats.

According to the proposal, the new project, currently called the Classroom Building, is the first purely instructional classroom building proposed at UCSB since the completion of Buchanan Hall in 1967. About 92% of the building’s total space will be devoted to classrooms and lecture halls.

The Finance and Capital Strategies Committee is comprised of UC Regents as well as other advisory members, including Governor Gavin Newsom, UC President Janet Napolitano and chancellors from some of the UC campuses. They approved UCSB’s new building — along with new building projects at the Riverside, Berkeley and San Diego campuses — on May 16 at the UC Regents meeting at UC San Francisco.

These new building projects are part of UC’s Long Range Development Plan (LRDP); the plan was implemented by the Regents in 2010, with the purpose of “shap[ing] how the campus will develop to the year 2025, including changes in our academic programs and the development of additional campus housing for students, faculty, and staff,” according to UCSB’s Design, Facilities, and Safety Services.

In total, UCSB’s new Classroom Building will cost $97,133,000; 82% of funding is from state appropriations of $79,787,000, while 18% is from campus funds, which are non-state, non-tuition reserves from grants, investments and sponsored contracts.

A portion of state appropriations will also come from state funding previously allocated for the Campbell Hall Replacement Building. Originally, the funding was allocated to tear down and replace Campbell Hall; however, concerns of the project’s financial feasibility, combined with immediate safety concerns, led UCSB to implement critical life-safety improvements and repairs in order to ensure safe, ongoing use of Campbell Hall, according to the proposal.

The new Classroom Building will accommodate more than “twice the capacity and many more rooms than the previous Campbell Hall plans,” according to the proposal.

Other alternatives to the Classroom Building discussed in the proposal include leasing off-campus space or annexing existing academic and administrative building space, but these ideas were not deemed viable by the committee because all other existing facilities on campus are already fully occupied, and “logistical problems” prevented leasing buildings in Isla Vista for classroom use. 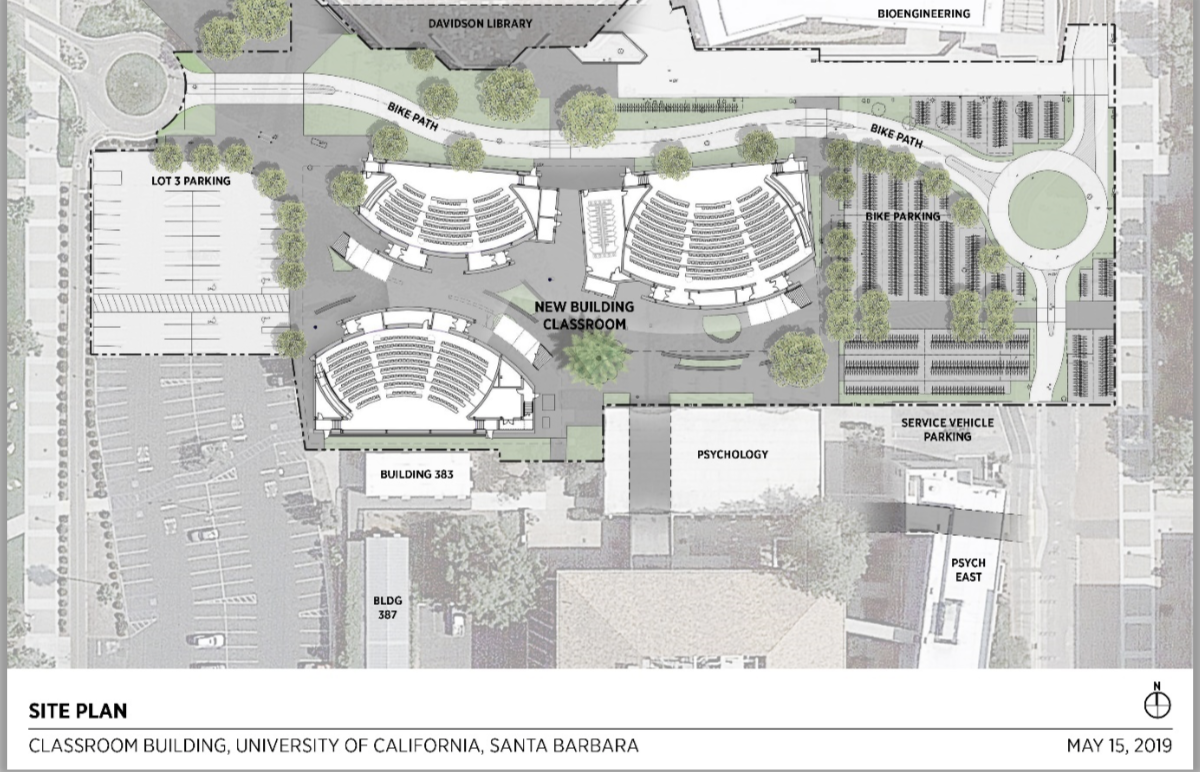 Proposed design for the new Classroom Building, located between the Psychology building and Davidson Library. Courtesy of UC Regents

In addition to substantially increasing the amount of classroom space on campus, the Classroom Building will also incorporate more modern classroom designs.

Current classrooms are “exclusively traditional in format … lack[ing] the flexibility, amenities, and technology needed to accommodate contemporary, project-based learning,” according to the proposal.

Three active learning classrooms in the Classroom Building are designed for project-based teaching and group and student participation, with flexibility to arrange furniture and digital and visual technology for each class’s specific needs.

Traditional discussion classrooms will include moveable furnishings and digital capability for project-based work, and lecture halls will be designed with rotating seats, allowing “turn-to-team” interaction.

The Classroom Building plan also requires the demolishing of Building 408, which holds the McCauley Lab in EEMB (Ecology, Evolution, and Marine Biology) and the Passow Lab in MSI (Marine Science Institute), along with various graduate and faculty offices.

The campus bike path runs through the future construction site for the Classroom Building; the plan includes relocation of the path and as well as a new bike parking lot with 1,500 spots.

If state funding is approved, building construction for the Classroom Building will move forward for spring 2023 completion.

A version of this article appeared on page 5 of the May 30, 2019 print edition of the Daily Nexus.

Correction [May 31, 11:01 a.m.]: A previous version of this article stated that Building 408 contains the Ergonomics Lab, not the  McCauley Lab in EEMB (Ecology, Evolution, and Marine Biology) and the Passow Lab in MSI (Marine Science Institute). This article has been updated to reflect the correct information.