The Daily Nexus
Sports
Behind the Scenes, Ortiz Thrives as Undergraduate Analytics Manager
May 30, 2019 at 10:44 am by Brandon Victor 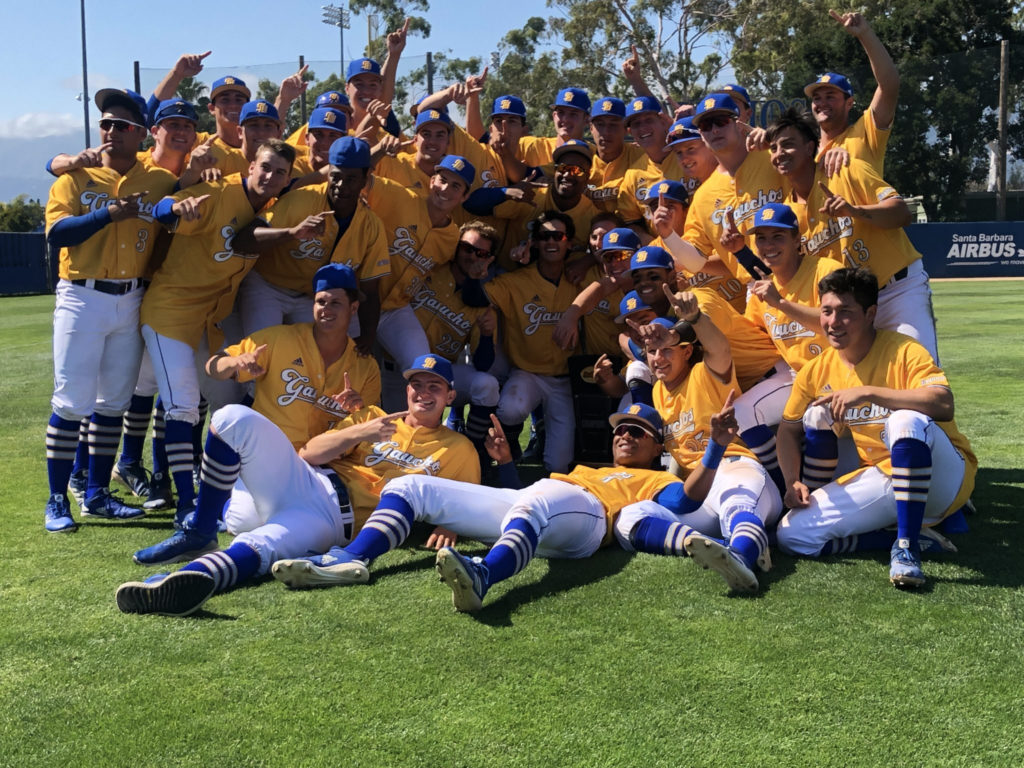 Freshman Rodney Boone pitched the game of his life on Saturday.

Toeing the rubber for the Gauchos in the most important game of the entire season — the game that would decide the conference — Boone made Cal Poly’s hitters look foolish all night long. In total, Boone threw eight and one-third innings of shutout baseball, along with a career-high 12 strikeouts. The key ingredient to Boone’s success on Saturday was his changeup, with Boone generating 18 swings and misses on his secondary pitch.

“Coach talked to me about throwing my changeup to look like a fastball and to keep my arm speed good on my off-speed,” Boone told KCSB’s Max Kelton after the game, when asked about the effectiveness of the pitch.

How did a freshman pitcher — one who merely throws for average velocity — pitch the game that clinched the Gauchos their first conference title in 33 years? Part of the answer lies with a slim, self-described nerd by the name of Tony Ortiz.

Instead of enjoying the title with the team on Saturday, Ortiz was perched high up in the bleachers, recording every single pitch and swing during the game — just as he’s done all season.

Despite only being a third-year, Ortiz has flourished this year as the Undergraduate Analytics Manager for the UCSB baseball team. Since 2017 — when former Director of Analytics Evan Short took over the position — UCSB has become the most analytically driven baseball program on the West Coast. Short pushed the coaching staff to raise the money to ensure that Santa Barbara has state-of-the-art equipment, including tools like TrackMan and Rapsodo that major league teams use for their statistics.

This past year, however, Short received an offer to help build the Toronto Blue Jays’ analytics department — an offer too good to turn down. After two years of revolutionizing Santa Barbara’s analytics usage, Short left for Major League Baseball, leaving a gaping hole for the baseball program to fill.

When Ortiz first joined the baseball staff last year, he was a baseball operations intern, helping out with whatever he could around the office. But when Short knew he was leaving, he began to groom Ortiz to take over his role with the team.

“At first, I was only occasionally working with [Short], and it was more on the baseball side of things because I didn’t have the experience with statistics or programming,” Ortiz said. “Towards the end, however, I was writing reports to provide to the coaches so they had more information about what the players needed to work on during the season.”

With a team of four interns at his disposal, Ortiz’s main job is to be the liaison between the hard data and the coaching staff, turning the code written by his interns into easily interpretable and digestible bites for the coaches to understand.

“Sometimes my interns will come up with a report, and it will still be marked with the code they wrote,” Ortiz said. “I love seeing how they did it, but when it comes to giving it to the coaching staff, I tell them we need to get rid of all of that and just get to the point.”

Somehow, Ortiz manages to juggle his responsibilities as Undergraduate Analytics Manager with being a full-time statistics student at UCSB. In a typical day, Ortiz will go to the baseball office to upload and analyze videos, go to class and then head to the stadium to record statistics for the live bullpen sessions.

“The interns have been extremely helpful in my adjustment to this position,” Ortiz said. “It’s really nice to be able to rely on them for help, because it gives me more time to do the actual analysis.”

Despite his packed schedule, Ortiz thrives because of his unmitigated love for the sport of baseball. Before I could even ask  my first question prior to the game on Saturday, Ortiz unpacked the Gauchos’ devastating loss on Friday to me, explaining how UCSB’s high-risk, high reward-style offense ultimately backfired. While he uses some data in his analysis, Ortiz makes it clear that his love for baseball stretches beyond just a trendline or chart.

“I think all the time that if I could play, I would give up all the analytic stuff to play just because I love the game that much,” Ortiz said.

In a more traditional game like baseball, some pundits and coaches are apprehensive to turn the game over to hard data and numbers. But under the direction of Head Coach Andrew Checketts, UCSB has wholeheartedly embraced the data revolution in baseball.

“Coach Checketts and the coaching staff are very reasonable, and if they see something with evidence, they are going to take it and run with it,” Ortiz said. “The coaches have their own ideas of what the players should work on, and then they can use the analytics as support.”

Of course, a data analytics team is nothing if the players themselves don’t buy in and aren’t willing to learn from data rather than relying on raw intuition.

Perhaps no player has embraced data as much as Boone has in his first year at Santa Barbara.

“Boone is a perfect example of a player where you can’t see how good he is until you look at his analytics numbers,” Ortiz said. “He’s not a flamethrower, but he has a wrinkle on his fastball — a little movement — that makes it harder to hit than just a regular fastball.”

Boone came into Santa Barbara without a plus fastball, but the analytics team broke down videos in the offseason to try to help the coaches develop his secondary pitches, including his changeup — the very changeup that played a vital role in Boone’s start on Saturday. Despite being completely behind-the-scenes, those video breakdowns ended up helping UCSB take home the Big West title for the first time in 33 years.

One of Ortiz’s main goals for next season is to incorporate more video and advanced statistics into the offensive side of things for the Gauchos. After putting most of his time and resources into helping the pitching staff, however, the results speak for themselves.

As a team, UCSB has pitched to a 3.21 ERA this season while racking up 491 strikeouts as a pitching staff, four strikeouts away from breaking the school’s single season record, which will likely be broken during the playoffs.

“We’ve really built a culture here where the pitching staff has completely bought in on the analytics,” Ortiz said. “Like the Astros and Rays [in the pros], it’s just become a mindset with our team.”

He may never get the credit he deserves, but Ortiz has played an integral role in the Gauchos’ 45-9 season — the best record in program history.

If the Gauchos can make it to Omaha, Ortiz will be ready, boxplot in one hand, Rapsodo in the other, to help the coaching staff bring a title back to Santa Barbara.